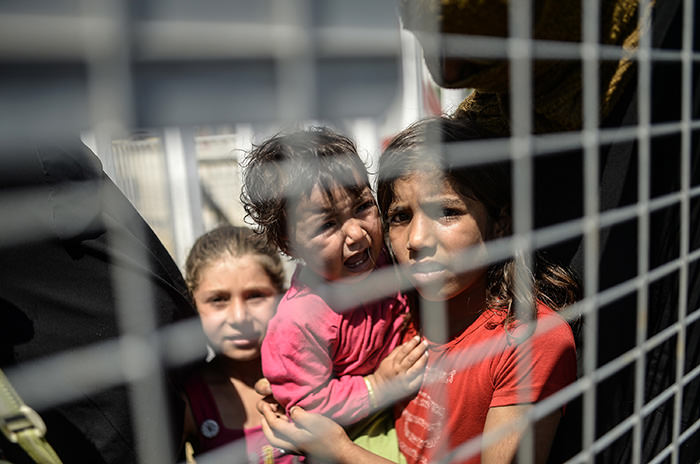 Syrian refugees wait behind a fence prior to go back to the northern Syrian town of Tal Abyad at the Turkish border post of Akcakale, the province of Sanliurfa, on June 17, 2015 (AFP Photo)
by Begüm Tunakan Jun 17, 2015 12:00 am

In a bid to praise Turkey’s role in dealing with the mass influx of Syrian refugees on the Syrian border, the PACE president has called on European governments to find a global response to the crisis hitting not only Turkey, but Europe as well

Amid the intensified refugee crisis on the Turkish-Syrian border, a 25-member delegation from the Parliamentary Assembly of the Council of Europe (PACE) paid a visit to Syrian refugee camps in the southern city of Gaziantep on Monday in a bid to praise Turkey's efforts to deal with the humanitarian emergency situation at its border. After the visit, ‎the Daily Sabah team spoke to PACE President Anne Brasseur about the global refugee crisis that is hitting not only Turkey, but countries in Europe as well. While urging European countries to take more action to share the burden of mass influx of Syrian refugees into Turkey, Brasseur emphasized the need for a global response at the supra-institutional level to tackle the global refugee crisis. While European countries have been reluctant to make further commitments to EU plans on migrant relocation and resettlement, Brasseur suggested that the U.N. is the only international body that can find a global solution to the refugee crisis in the Middle East and Mediterranean.

"I think what we need is a global approach, a global leadership. I can only see one to take over the leadership role. That is the United Nations. … The countries must support the U.N., but the U.N. should take the lead," Brasseur said.

She emphasized the need to raise awareness in European countries regarding the humanitarian emergency situation in Syria,while urging Europe to share the burden of Syrian refugees with Turkey. As a concrete step, a series of debates and events on immigration will be held by PACE to get the message through to each member state ahead of World Refugee Day on June 20. As the attention in Europe has turned to the crisis in the Mediterranean, she urged European countries to establish "a huge solidarity" not only for the Mediterranean, but also for the eastern borders of Europe and give support to Turkey to deal with the crisis.

"If you look at a city like Kilis where you have roughly 9,000 inhabitants and 110,000 people from Syria, there you can see the tremendous efforts the cities, the authorities are doing. We just cannot leave them alone. The way they are hosted are really excellent. Especially in the camps, it is incredible how they are taking care of the children."

She criticized European countries for posing "national solutions to the global crisis. "Closing the border is just a national solution. I think that is not acceptable. If you are a member of an organization, if it is the European Union or the Council of Europe or the U.N., you have responsibilities. You cannot say it is none of my business. … It is very short-sighted to close borders. It is better to do it in a controlled way and to organize it before it is too late." Amid growing debate in Europe on how to deal with a refugee crisis, Austria, France and Bulgaria have stepped up border controls on migrants. While France and Austria have turned back migrants coming from Italy, Bulgaria started imposing a closed-door policy through building a fence along! its border with Turkey to limit the illegal crossings.

While refusing to speak on behalf of the EU, Brasseur emp[hasized the need for "responsibility sharing" other than "burden sharing" among European countries.

So far, European countries have been paralyzed when it comes to the migration crisis. During talks in Luxembourg on June 17, EU interior ministers disagreed over the distribution of 40,000 migrants arriving in Italy and Greece among the 28-nation bloc to ease the load on the two southern European nations. The EU proposals have not received enough backing from EU countries.

"The Baltic states, for instance, say they are transit countries. They say, of course now with the developments in Ukraine that they are still waiting for Ukrainians coming to the Baltics where they have families. They say we have to take them first. This is one of their explanations. But I think we can all do more, we must have more courage," she said.

In Europe, the migration crisis has become more visible lately. Train stations in Italy and France are filled with hundreds of refugees. Europe has already been contending with thousands of refugees. However, the figures show that Turkey hosts around 2 million refugees more than the total number of refugees in Europe.

"I saw what Turkish authorities are doing in the cities where there are more Syrians than the local population. When a European government wants to build a center to host 100 people coming from abroad, we are already having demonstrations against it. It is terrible."
Last Update: Jun 18, 2015 11:38 am
RELATED TOPICS