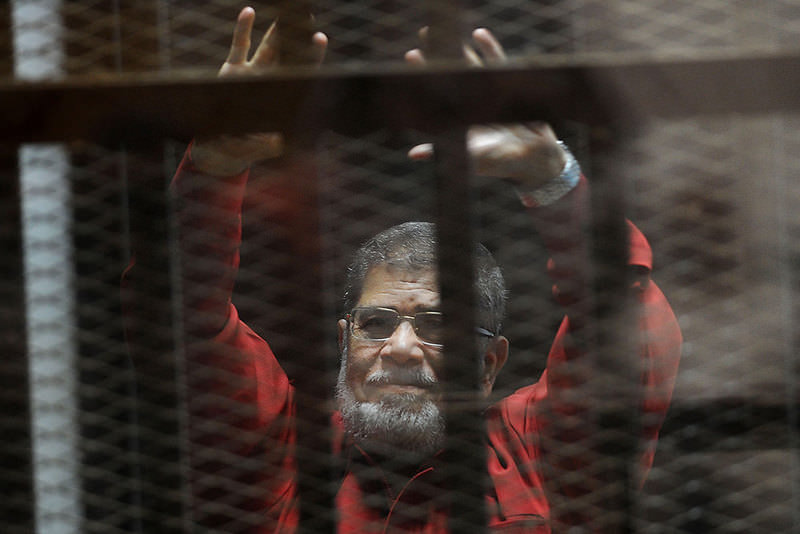 by Daily Sabah with AA Jun 21, 2015 12:00 am
Egypt's first democratically elected President Muhammed Morsi, who was overthrown after a bloody military coup headed by the incumbent President Abdel Fattah el-Sissi, has appeared back in the cage for the first time in Sunday's session wearing a red uniform, reserved for prisoners to be executed, after the Cairo Criminal Court on Tuesday sentenced him to death over prison break charges in 2011.

In the Qatar espionage case, Morsi is accused of using his post to leak classified documents to Qatar, with the help of secretaries and Muslim Brotherhood figures. Morsi is already facing three other trials, including another case of alleged espionage, and could face the death penalty if ruled guilty.

Muhammed Morsi and five others were sentenced to death on charges of damaging and setting fire to prison buildings, murder, attempted murder, looting prison weapon depots and releasing prisoners while escaping from the prison outside Cairo during the January 2011 uprising. In April, a Cairo court sentenced Morsi to 20 years in jail for inciting violence that led to the death of 10 people in clashes outside the Ittihadiya presidential palace on Dec. 5, 2012, the first verdict in one of five trials against him since his ouster in July 2013.

Many top Muslim Brotherhood figures are on trial and some have received life sentences. The Brotherhood's top leader, Supreme Guide Mohamed Badie, has recently received a death sentence for inciting violence and murder. His death sentence is subject to appeal.