Egypt to confiscate and remove Muslim Brotherhood books from libraries 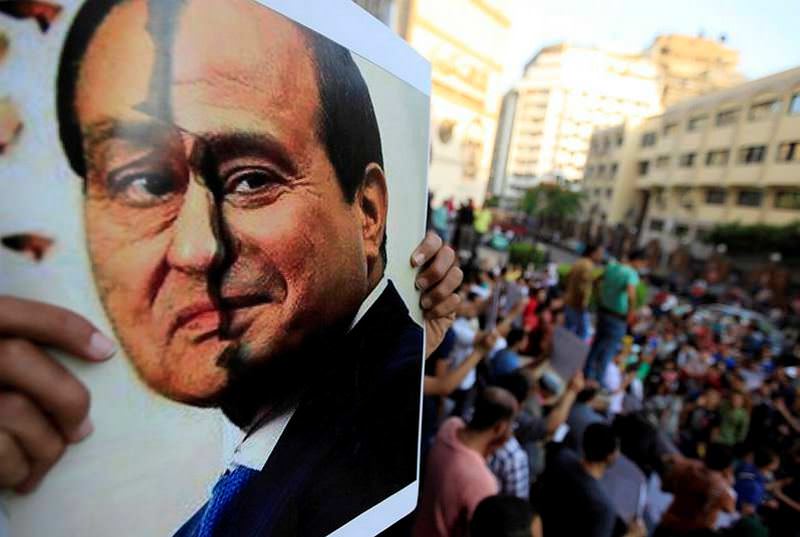 A poster shows a placard with the faces of Egypt's ousted President Hosni Mubarak (L) and the current President Abdel-Fattah el-Sissi as Sissi has been following an oppressive policy similar to Mubarak's, toward the Muslim Brotherhood.
by Yusuf Selman İnanç Jun 24, 2015 12:00 am

Egypt continues to increase pressure on the Muslim Brotherhood, which was labeled a terrorist organization after the bloody military coup in 2013, headed by the incumbent president, Abdel-Fattah el-Sissi. The Ministry of Religious Endowments announced Tuesday it will "purge and confiscate" the libraries of Egyptian mosques of any books or digital material that contradict "the leniency of Islam." Ashraf Fahmy, a preaching official in the ministry, was quoted by Daily News Egypt as saying that the decision will include investigating small libraries in mosques "in order to purge them of books that call for fundamentalism and extremism and call for the opposite of moderate Islam." The newspaper quoted Fahmy: "A committee will examine the books in every city to evaluate and remove them. Any book, irrespective of its author or publishing house, that contradicts the teachings of Islam, will be confiscated." Ministry Undersecretary Gaber Tayee said ministry officials have been instructed to check all books in mosque libraries to make sure "they fit with Islam's tolerance." "Any book authored by an extremist or a member of the Muslim Brotherhood or al-Gamaa al-Islamiyya will be removed," he said. The books of famous authors and leading Muslim Brotherhood figures like Sayyed Qutb, Yusuf al-Qaradawi and Hassan al-Banna will be purged and confiscated. Activists on Twitter said people in Egypt fear that the coup administration would raid homes to investigate whether there were prohibited books.

The Muslim Brotherhood was the largest political movement in Egypt and was delivering aid, social services and education facilities across the country with a moderate Islamist ideology seeking to end poverty, foreign intervention, unemployment, social problems and corruption. Since the first day of its establishment in 1928 by Banna, who was killed in 1949, the group has never resorted to violence but preferred to remain in legal politics and separated itself from radical groups that adopted the Salafist Wahhabi understanding of Islam like al-Qaeda. The Muslim Brotherhood was familiar with politics as it struggled to grab seats in parliament in the era of President Hosni Mubarak. The group entered parliamentary elections and presidential elections. Popularity, reliability and fact-based words brought Muslim Brotherhood-supported Mohammed Morsi to power after receiving nearly 52 percent of the vote. Morsi became the first democratically elected president of the country.

Egypt was on its way to becoming a democratic country where the president and members of parliament were elected freely. However, Morsi's rule did not last long, and Sissi, supported by Arab Gulf countries, changed the game and the fate of Egypt.

In July 2011 before Morsi's election and the bloody military coup happened, everybody was hopeful, and nobody, including Muslim Brotherhood members, was expecting a coup by the military in the coming years. However, Morsi was not welcomed by the U.S., Israel or oil-rich Gulf countries. Sissi, who was serving as the Chief of the Armed Forces, enjoyed the unconditional support of Gulf countries and the silence of world powers, including the EU, the U.S. and Russia while ousting Morsi. Turkey was the only country that rejected Sissi's rule. U.S. Secretary of State John Kerry said that the Egyptian army was restoring democracy by overthrowing the democratically elected president. Gulf countries, especially Saudi Arabia, which were afraid of seeing a similar picture in their countries in case of a popular uprising demanding democracy, welcomed the coup as well.