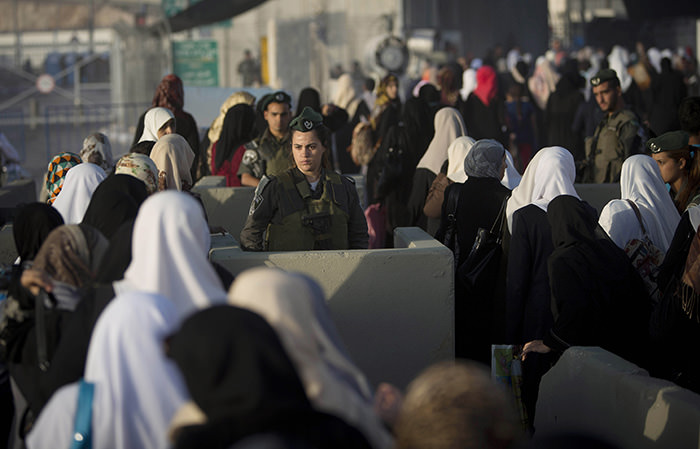 Palestinian women walk past an Israeli border police officer on their way to pray at the Al-Aqsa Mosque in Jerusalem (AP Photo)
by Daily Sabah with AFP Jun 24, 2015 12:00 am
Israeli government has revoked permits for 500 Palestinians from the Gaza Strip to enter Jerusalem ahead of Friday prayers because of rocket fire from the Palestinian territories.

A spokeswoman for COGAT, the defence ministry unit which coordinates with Gaza, told AFP the move to cancel part of its measures easing restrictions on Palestinians during the Muslim holy month of Ramadan applied to this week only and was "because of the rocket" which hit southern Israel on Tuesday night, causing no injuries.

Israel had relaxed restrictions on the movement of Palestinians to and from the West Bank and Gaza Strip ahead of Ramadan which began last week, including letting up to 800 Gazans enter Jerusalem for prayers at Al-Aqsa mosque, Islam's third-holiest site, each Friday of the month.

Israel had on Sunday revoked entry permits for residents of the West Bank village home to the Palestinian who had stabbed the policeman.

During the Israel army's 'Operation Protective Edge' on Gaza, about 2,200 Palestinians, most of them civilians were killed, nearly 16000 thousand homes were destroyed. Meanwhile, 73 on the Israeli side, most of them soldiers, also killed during the conflict.
Last Update: Jun 24, 2015 1:01 pm
RELATED TOPICS