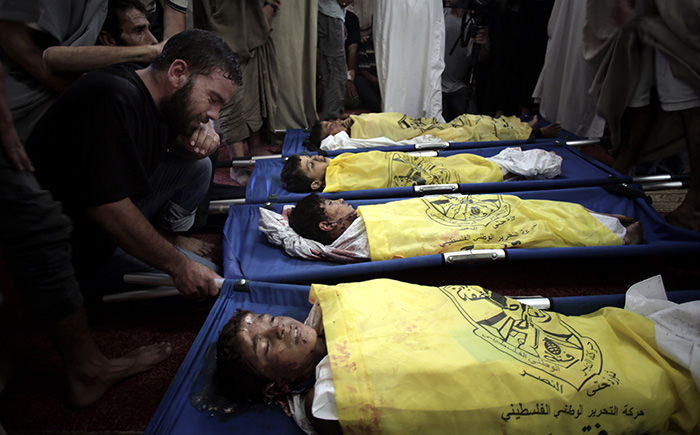 |AP Photo
by Jun 24, 2015 12:00 am
The Palestinian Authority will submit a report to the International Criminal Court on Thursday, of the evidence of Israeli war crimes committed in the occupied territories, a top official confirmed.

The report will be submitted by Foreign Minister Riad Al-Malki and a Palestinian delegation to the court in The Hague, said Mustafa Barghouti, a member of the Palestinian Higher National Committee for the ICC, on Wednesday.

Barghouti told reporters in Ramallah that the report is intended "to assist the court with its preliminary examination in crimes committed on the territory of the occupied state of Palestine, including the West Bank, East Jerusalem and the Gaza Strip, since June 13, 2014."

Palestine became the 123rd member of the ICC, which has jurisdiction over war crimes, crimes against humanity and genocide, on April 1.

The ICC had already started a preliminary examination in February of the Palestinian complaints to see if there were grounds to start an official investigation, and a delegation from the court is expected in the region on July 25.

A UN General Assembly vote in 2012 accepting Palestine as a non-member observer state made the Palestinians eligible to join the court, but President Mahmoud Abbas did not immediately seek accession under international pressure to give negotiations with Israel a chance.

Abbas signed the Rome Statute on December 31, 2014. It took three months for the statute to enter into force for Palestine, with the court saying jurisdiction will date back to June 13, 2014.

That means the court's prosecutor could investigate the 50-day war between Israel and Hamas militants in the Gaza Strip in July and August 2014.

Barghouti said that in addition to Thursday's report, the Palestinians still have thousands of other documents they intend to share with the court in due course.

Israel, which like the United States and Russia has not signed up to the court, has said Palestine is not an official state and therefore the ICC does not have jurisdiction over it.
Last Update: Jun 24, 2015 2:37 pm
RELATED TOPICS