18 journalists behind bars in el-Sissi's Egypt, most since 1990: report 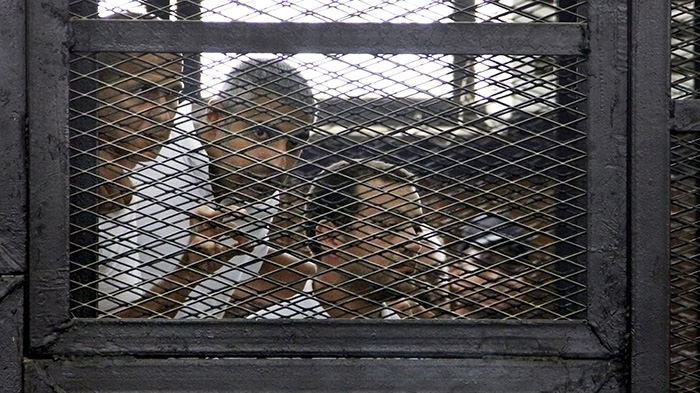 by Daily Sabah with AP Jun 25, 2015 12:00 am
Journalists face unprecedented threats in President Abdel-Fattah el-Sissi's Egypt, a watchdog group said on Thursday, with the highest number behind bars since it began keeping records in 1990.

In a report detailing the incarceration of 18 Egyptians, the New York-based Committee to Protect Journalists said most were accused of affiliation with the now-outlawed Muslim Brotherhood.

It said the threat of imprisonment in Egypt is part of a stifling atmosphere in which authorities pressure media outlets to censor critical voices and issue gag orders on sensitive topics. It said el-Sissi has invoked national security to trample on liberties.

"CPJ spoke to high-level officials, including the prosecutor-general and the minister of transitional justice, who denied that Egypt was holding any journalists in jail in relation to their work," the group said in the report, which was based on a June 1 census of Egyptian prisons. "But CPJ research shows that the government of el-Sissi ... has used the pretext of national security to crack down on human rights, including press freedom."

As army chief, el-Sissi overthrew Egypt's first democratically-elected President Mohamed Morsi in 2013. Since the overthrow, authorities have waged a massive crackdown on the Muslim Brotherhood and other opponents, killing hundreds, jailing thousands and sparking a backlash of attacks against security forces, mostly in the restive Sinai Peninsula. Activists say dozens more journalists have been detained.

Cases detailed in the report show that most were jailed for covering protests, airing views contrary to the government or reporting on injustices committed against people affiliated with the Brotherhood, which Egypt considers a terrorist organization.

Several stand accused of "spreading chaos," while others are charged with disseminating "false news" or anti-government messages.

In one case highlighted in the report, Mahmoud Abou-Zeid was arrested in August 2013 while taking photographs of the violent dispersal of a pro-Morsi sit-in, in which hundreds were killed. He has been in pre-trial detention since then and has not been formally charged.

"I spoke with him last week and he was tired and depressed," his brother, Mohamed, told The Associated Press. "We don't know what will happen next and have no information regarding the future of the case. It is a very difficult situation for all of us."

In another case, photographer Omar Abdel-Maksoud was arrested in 2014 while covering a baby shower for a woman who had been detained and forced to give birth in a hospital in handcuffs. Police launched a violent raid on the gathering, the report said, citing local media.

CPJ cited cases of journalists disappearing into Egypt's labyrinth of detention facilities without lawyers or family members knowing where they are, with court hearings sometimes taking place without their knowledge.

It said the heavy restrictions meant that scarce information emerges from entire regions, especially Sinai, where militant groups are fighting security forces and little is known about the conflict's toll on civilians. One journalist from the area, Saeed Abuhaj, was arrested for carrying a leaflet bearing Brotherhood slogans, his lawyer said. He has been charged with inciting violence and using weapons against police.

Several high-profile cases involving the state's campaign against journalists have garnered international attention, most recently that of Ahmed Mansour, a journalist for Qatar-based broadcaster Al-Jazeera, who was stopped in Germany when officers there acted on an Egyptian arrest warrant.

After detaining him last weekend, German prosecutors decided Monday to free him and not pursue his extradition to Egypt, where he was convicted in 2011 on torture charges he denies. CPJ and France's Reporters Without Borders criticized the detention.

Al-Jazeera has been a particular focus for Egypt following Morsi's overthrow, since the current government sees it as a mouthpiece for the Brotherhood. Three journalists from its English-language channel are being retried on charges of being part of a terrorist group and airing falsified footage. One of the three, Australian journalist Peter Greste, has been deported.

The Obama administration has harshly criticized Egypt's restrictions on free speech and the arrests of political dissidents, citing a "steadily shrinking space for political dissent." But Washington has continued to provide Cairo with some $1.3 billion in annual military aid after briefly suspending it following Morsi's ouster.

An Egyptian journalist not cited in the report said he and others, especially videographers and photographers, are regularly targeted when they cover Brotherhood-affiliated protests. He spoke on condition of anonymity for fear of repercussions.

"They raided my family's apartment looking for me six times since 2013, and this month they smashed up a lot of furniture," he said, adding that he has been staying with friends.

"My work is a blessing and a curse I'm living on the run."

Since the coup, thousands of other Egyptians have been put in prison for supporting former President Morsi. Many journalists, academics and supporters of democracy have been detained and held in military facilities. Many of those who were jailed have died in custody as a result of mistreatment.
Last Update: Jun 25, 2015 4:45 pm
RELATED TOPICS