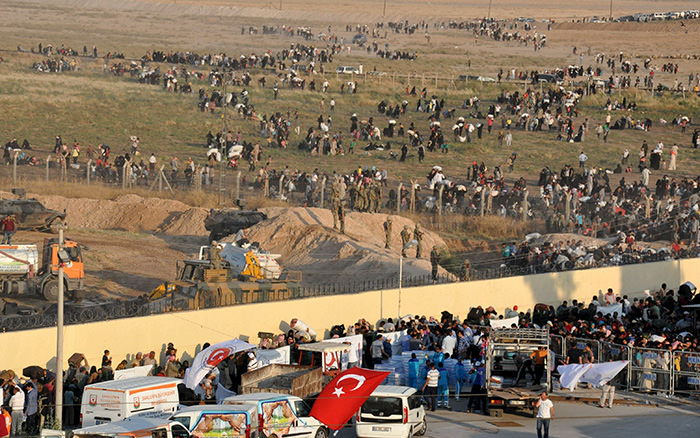 Syrian refugees from Tel Abyad (foreground) line up at the border crossing as the others wait behind the fences to cross into Turkey at the Akcakale border gate in Sanliurfa province, Turkey, June 14, 2015 (Reuters Photo)
by Anadolu Agency Jun 25, 2015 12:00 am
The self-proclaimed Islamic State in Iraq and al-sham (ISIS), Syrian-Kurdish militias of People's Protection Units (YPG), affiliated with the Democratic Union Party (PYD), and the regime of Bashar al-Assad all serve the same purposes, claimed Izzet Sohta, a Syrian Turkmen politician, and that his community was concerned about the recent fighting in the Syrian city of Tal Abyad.

Fighting between Kurdish forces and ISIS rebels around the Syrian town has fueled a new wave of desperate civilians trying to escape.

A total of 23,349 refugees - mainly Arabs and Turkmen - have already entered Turkey's Şanlıurfa province through the Akçakale border crossing since June 3. However, Sohta says that it is his community which has borne the brunt of the recent fighting.

"What is most significant for us is that 3.5 million Turkmens are living all across Syria. The most oppressed and expelled group is Turkmens due to our strategic position in Syria," he says.

Sohta stated that Turkmen have been recently forced to migrate from villages near Tal Abyad and Homs in Syria.

"The regime is hitting from the air at many points and ISIS is going forward. It was what has happened in Aleppo," he said.

He claimed that the three forces are "so-called" enemies and that they have significant ties. "The three groups have coalesced. There is an effort to change the borders in Syria. This is a very dangerous situation both for Syria and the region," he added.

Sohta said that Kurdish PYD party wants to reach to the Mediterranean by going parallel with the Turkish border and that his Bayirbucak region - in the northern Latakia province of Syria, which is mostly populated by Turkmen - is at the closest point to the sea.

"It has to capture Bayirbucak to reach the sea. Turkmens must be supported immediately. We want Syria to remain in one piece.

"If the maps in Syria are to be drawn again and Turkmens could be slaughtered, we want our region to be a part of Turkey," he added.

Turkey, which shares a 900-kilometer long border with Syria, has given refuge to more than 1.7 million Syrians, according to the UN's refugee agency, with more people coming in because of ongoing bloodshed in the war-torn country.
Last Update: Jun 25, 2015 5:25 pm
RELATED TOPICS