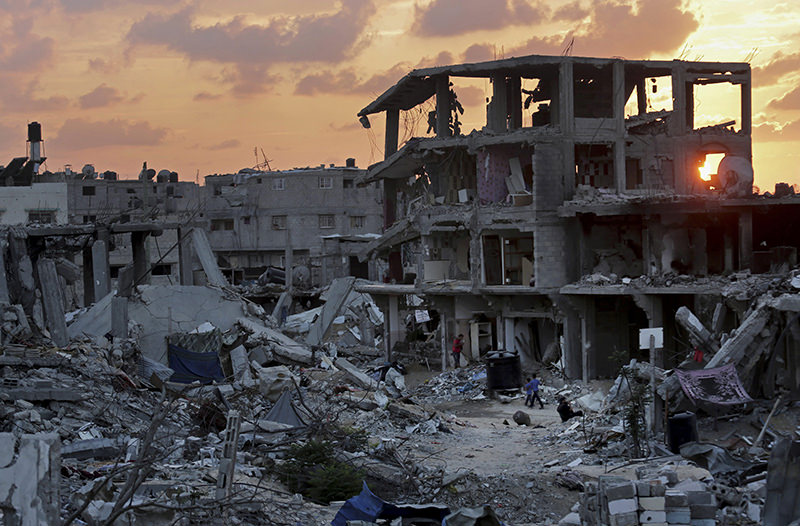 Palestinians walk during the sunset between the rubble of their destroyed building in Shijaiyah neighborhood of Gaza City in the Northern Gaza Strip, Oct. 12, 2014 (AP Photo)
by Associated Press Jun 25, 2015 12:00 am
Gaza reconstruction is moving at a "snail's pace" and at this rate, it would likely take 30 years to rebuild the extensive damage from last summer's Israeli attacks on the city, a senior U.N. official said.

Roberto Valent, the incoming area chief of a U.N. agency involved in reconstruction, blamed the delays on the slow flow of promised foreign aid and continued Israeli curbs on the entry of building material to Gaza.

Speaking in the Gaza City office of the U.N. Development Program, he said his tour of destroyed neighborhoods this week was "very, very disheartening."

Israel and Egypt have severely restricted access to Gaza since the Hamas seized the territory in 2007.

After last year's 50-day war, Israel allowed the import of some cement and steel under U.N. supervision to ensure the materials would not be diverted by Hamas for military use.

Valent told The Associated Press on Wednesday that the system is too slow and Israel must open Gaza's borders to allow for the speedy rebuilding or repair of 141,000 homes he said suffered minor to severe damage or were destroyed.

"The housing stock is being reconstructed at such a snail's pace," he said. Easing access is not enough and "the real solution is the lifting of restrictions."

At the current pace, "you will have to wait 30 years to rehabilitate and to reconstruct what has been damaged," said Valent, the new area chief of the UNDP's Program of Assistance to the Palestinian People.

Israel says the system is working, but that construction materials must be closely monitored, arguing that Hamas is again digging military tunnels for which it needs cement and steel.

In New York, U.N. political chief Jeffrey Feltman told the Security Council on Wednesday that the pace of reconstruction "remains far too slow," but that the U.N.-supervised system has been vital for getting building materials into Gaza. He said close to 90,000 homeowners have received construction materials for repairs and that 135 construction projects were approved by Israel, out of 202 submitted.

Critics of the reconstruction efforts note that not a single home has been rebuilt. Feltman said the construction of 16,000 homes is expected to begin shortly.

He appealed to donors to send promised aid. Otherwise, money will run out by September, he said.

Donor countries have pledged $5.4 billion in aid, including for Gaza reconstruction, but Palestinian officials say they've received only a fraction so far.

The Israeli group Gisha, which advocates for Gaza civilians, said about 5 million tons of construction materials are needed to rebuild the 2014 war damage.

Israeli officials say they've permitted about 1.3 million tons to enter Gaza since September, but Gisha says the bulk of that was for Qatari-funded development projects, not post-war reconstruction.

Last year's war was the deadliest and most destructive of three rounds of fighting between Israel and Hamas since 2008.

According to the U.N., more than 2,200 Palestinians, including 1,462 civilians, were killed during the fighting, which started on July 8 after a chain of events stemming from the kidnapping and killing of three Israeli teenagers in the West Bank by Hamas and the kidnapping of a Palestinian teenager who was burned to death by Jewish extremists in a revenge attack. Seventy-three people, including six civilians, died on the Israeli side.

Valent said that his agency is overseeing the repair or rebuilding of more than 31,000 homes and shelters of non-refugees in Gaza; the remaining 110,000 housing units are the responsibility of the local U.N. aid agency for refugees.

Of the homes under Valent's purview, some 26,000 suffered minor damage, more than 1,500 were severely damaged and more than 3,400 were destroyed.

The agency needs to pay two years' worth of rental subsidies for more than 3,700 displaced families, for a total of $31 million, but is $20 million short, he said.

Meanwhile, work has begun on repairing 840 of the severely damaged homes. This, he said, "is a drop in the ocean."