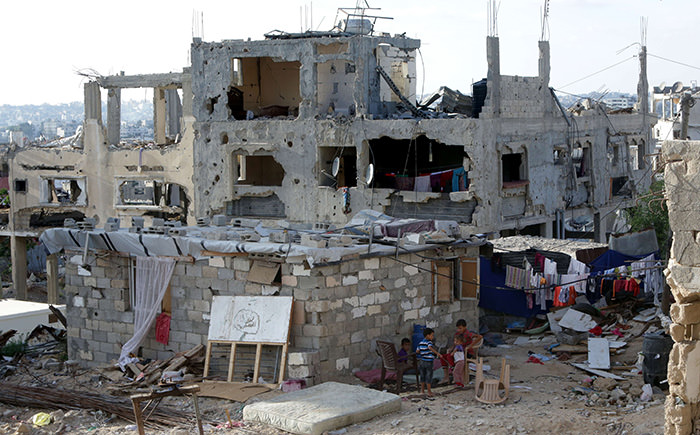 Palestinian children play next the remains of their house on June 22, 2015 in Gaza City that was destroyed during 50-day war between Israel and Hamas-militants in the summer of 2014. (AFP Photo)
by Daily Sabah with AA Jun 25, 2015 12:00 am
The United Nations has urged Israel's prime minister to take steps toward a two-state solution, including halting what it described as "sensitive and unilateral activities in the West Bank" in a statement released on Wednesday.

The UN's Under-Secretary-General for Political Affairs, Jeffrey Feltman said: "The Secretary-General [Ban Ki-moon] is encouraged by the recent reaffirmations by Prime Minister Netanyahu of his commitment to the idea of a sustainable two-state solution' but notes that this must be translated into actions."

The actions to be stopped would include "sensitive and unilateral activities in the West Bank," like settlement building, Feltman added.

Although Feltman said Ban welcomed Israel's easing of some restrictions on Palestinian movement, he encouraged the Israeli government to maintain and expand these measures to include "the legitimate movement of people and goods in and between Gaza and the West Bank, including East Jerusalem, and improve the quality of life of Palestinians."

Feltman stated that Ban was also concerned about the situation of Palestinian prisoners, including those on hunger strike, in Israel.

"The Israeli government's decision on 14 June to re-introduce draft legislation to permit force-feeding of prisoners on hunger strike under certain conditions, if approved by the Knesset [Israeli parliament], would be in contravention of international standards," he said.

The UN political affairs chief said that Ban was closely following reports on a third flotilla of pro-Palestinian activist ships attempting to reach Gaza, whose waters are under Israeli naval control.

"He continues to believe that a flotilla will not help to address the dire situation in Gaza and reiterates his calls on the government of Israel to lift all closures, with due consideration of Israel's legitimate security concerns," Feltman said.

The first Gaza Freedom Flotilla expedition in May 2010 ended in tragedy after Israeli commandos killed eight Turkish nationals and an American of Turkish origin in a raid on the flotilla ship, Mavi Marmara. Another person of Turkish nationality died in a hospital in 2014 after being in coma for almost four years.

A second Gaza Freedom Flotilla took place in 2012, which too was turned back.

Israel has maintained a tight blockade of Gaza since 2007, when Palestinian group Hamas took over control of the territory, a move which has ravaged its economy and shaved off around 50 percent off its gross domestic product.

The Israeli government also continues to build illegal settlements on the occupied Palestinian territories despite the pressure from the U.N. and the international community. Since gaining control of the West Bank in the 1967 Six-Day War, Israel has been building settlements for its citizens as it continues to occupy new territories. The approaching elections seem to affect Israel foreign policy as the tiny country and only non-Muslim country in the region has become more offensive.