Israel once again blocks delivery of ‘freedom' to Gaza 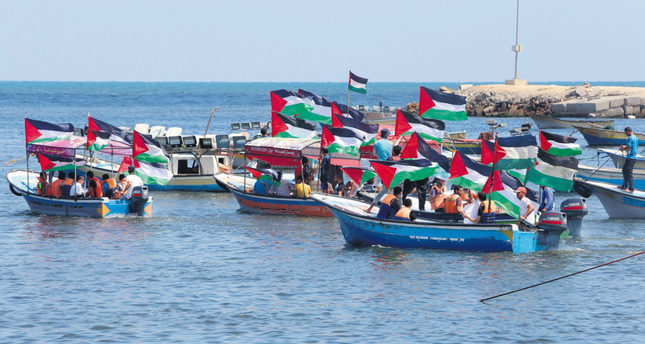 Gazan fishers were waiting to welcome the freedom flotilla in the coast.

A Freedom Flotilla III vessel was stopped by Israel and prevented from breaking the blockade imposed on Gaza. Five years ago, Israel intervened militarily on the Freedom Flotilla ship Mavi Marmara and killed 10 activists

The Gaza-bound Freedom Flotilla III vessel "Marianne" has been seized by the Israeli navy while it was attempting to break the blockade of the Gaza Strip. Israeli naval forces from the Israeli Defense Forces (IDF) forced the vessel to move to Ashdod port. After arriving in Ashdod, the activists were flown out of Israel from Ben Gurion Airport after an interrogation by officers. When contact with the vessel was lost because of the jammer-equipped Israeli ships, the foundation published a press release about the situation aboard.

Freedom Flotilla III, comprising four boats carrying 47 people from 17 countries, has been sailing since Saturday morning to challenge the blockade of the Gaza Strip. The flotilla's primary goal was to break the blockade of Gaza and to call on opening the port of Gaza, the port of Palestine to the world. Freedom Flotilla III members accuse Israel of committing an act of state piracy in the Mediterranean Sea. "At 2:06 a.m. the Marianne contacted Freedom Flotilla Coalition and informed us that three boats of the Israeli navy had surrounded her in international waters, while sailing approximately 100 nautical miles from the Gaza coast. After that we lost contact with the Marianne and at 5:11 a.m. the IDF announced that they had 'visited and searched' Marianne. They had captured the boat and detained all on board in 'international waters' as they admitted themselves. The only positive content in the IDF announcement was that they still recognize that there is a naval blockade of Gaza, despite [Israeli Prime Minister Benjamin] Netanyahu government's recent denial that one exists," Freedom Flotilla organizers said in a written statement.

The Marianne, a Swedish boat, which on Sunday afternoon was 100 nautical miles from the Gaza coast, was carrying 18 activists, among them Basel Ghattas, former Tunisian President Moncef Marzouki; European Parliament Deputy Ana Miranda and seven journalists, two of them from Al-Jazeera Arabic.

On Sunday, Ghattas called on Netanyahu and the Israeli Minister of Defense, Moshe Yaalon, to allow the Marianne to enter Gaza's port. In his letter to Netanyahu and Yaalon, Ghattas wrote: "As you know, I declared my intention to participate in the flotilla to Gaza out of clear political motivations because of my opposition to the ongoing blockade of the Gaza Strip. The blockade is illegal and contravenes international humanitarian law in that it imposes collective punishment on Gaza residents. All the passengers are peace activists and their sole purpose is to protest the closure of Gaza and to provide humanitarian aid, medical equipment to Shifa Hospital." An Israeli statement said that the government had "exhausted diplomatic channels," in an attempt to head off the flotilla, before taking military action. Netanyahu issued a statement saying that the flotilla was "a demonstration of hypocrisy" and support for Hamas, and said Israel's actions were in accordance with international law. On intercepting the ship, Y'alon praised the Israel navy for commandeering the Marianne overnight. "This flotilla does not have humanitarian intentions and is not interested in anyone's welfare. The participants' goal is to continue delegitimizing the state of Israel. This is part of the hypocritical show of lies from various factions around the world that prefer to support and bolster a relentless terrorist group like Hamas, which instead of caring for Gaza residents, tries to smuggle in weapons in order to use them against Israel and its civilians," Yaalon said in a statement.

The first Gaza Freedom Flotilla expedition in May 2010 ended in tragedy after Israeli commandos killed nine Turkish nationals, including 19-year-old Furkan Doğan, an American of Turkish origin, in a bloody raid of the Mavi Marmara. Another Turkish national, Uğur Süleyman Söylemez, died in hospital in 2014 after being in a coma for almost four years.

The second Gaza Freedom Flotilla took place in 2012. It too was turned back.

Israeli officials were sued by victims in Istanbul over the deadly Mavi Marmara raid in May 2010. This was the first case of its kind filed against Israel. It is expected that the case in Turkey will be the first of many such cases filed seeking to hold Israel criminally liable. The case against Israel is a public case and there are a total of 490 victims and complainants including the relatives of the victims of the Mavi Marmara attack and those who were victimized by the attack for different reasons. Four Israeli high officials are being tried in absentia. In the hearing, the Istanbul 7th High Criminal Court ordered the arrest of former IDF Chief of General Staff Gen. Gabi Ashkenazi, Naval Forces Commander Vice Adm. Eliezer Marom, Israel's military intelligence chief Maj. Gen. Amos Yadlin and Air Forces Intelligence head Brig. Gen. Avishai Levi. Investigations against other Israeli military officers or civilians who took part in the attack continue. The indictment prepared by the Istanbul Chief Public Prosecutor's Office, accuses the perpetrators of the Mavi Marmara attack of willful killing, torture or inhuman treatment, willfully causing great suffering or serious injury to body or health, arbitrary detention and arrest, violation of the freedom of expression, qualified robbery, illegal seizure of personal items and illegal capture of a sea vehicle among other charges, and seeks prison sentences totaling thousands of years for the suspects for each offense.

Share on Facebook Share on Twitter
Previous in MidEast The Syrian army said on Monday it had recaptured a major residential... Next in MidEast A United Arab Emirates court sentenced an Emirati woman to death on...
DAILY SABAH RECOMMENDS