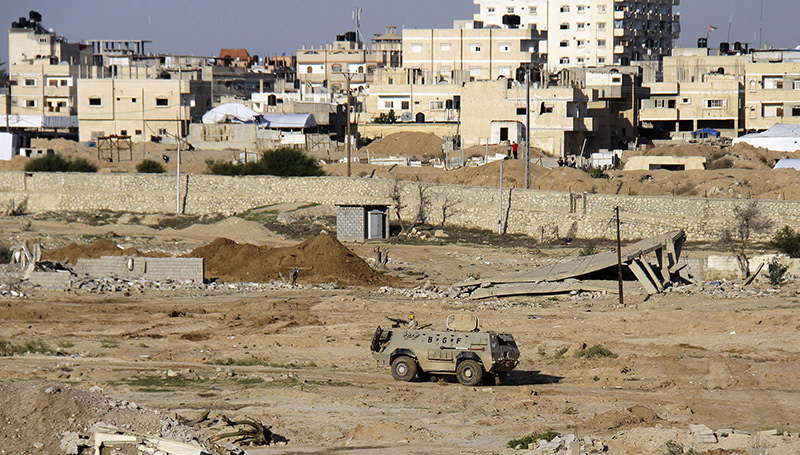 ISIS-affiliated groups carried out deadly attacks on Wednesday at several checkpoints in Sinai that resulted in the deaths of more than 70 Egyptian troops. The government has launched large-scale operations to hunt the militants

Islamic State of Iraq and al-Sham (ISIS)-affiliated militants on Wednesday unleashed a wave of simultaneous attacks, including suicide car bombings, on Egyptian army checkpoints in the restive northern Sinai Peninsula, killing at least 70 soldiers and 38 ISIS-affiliated militants, security and military officials said. The coordinated morning assaults in Sinai came a day after Egypt's president pledged to step up the battle against militants and two days after the country's state prosecutor was assassinated in the capital, Cairo.

The scope and intensity of the attacks underscored the resilience and advanced planning by the militants, who have for years battled Egyptian security forces in northern Sinai but have intensified their insurgency over the past two years just as the government threw more resources into the drawn-out fight.

An ISIS affiliate in Egypt claimed responsibility for Wednesday's attacks, saying its fighters targeted a total of 15 army and police positions and staged three suicide bombings, two of which targeted checkpoints and one that hit an officers' club in the nearby city of el-Arish. Except for the attack at the officers' club, the rest took place in the town of Sheikh Zuweid and targeted at least six military checkpoints, the officials said. The militants also took soldiers captive and seized weapons and several armored vehicles, they added, speaking on condition of anonymity in line with regulations.

At least 55 soldiers were wounded, the officials also said. As fighting raged, an army Apache gunship destroyed one of the armored carriers captured by the militants as they were driving it away, the officials added. Egypt's military spokesman, Brig. Gen. Mohammed Samir, said clashes were still underway in the area between the armed forces and the militants. His statement put the number of soldiers killed so far at 10, but the conflicting numbers could not immediately be reconciled in the immediate aftermath of a major attack. Samir's statement, posted on his official Facebook page, said some 70 militants attacked five checkpoints in northern Sinai and that Egyptian troops killed 22 of them and destroyed three all-terrain vehicles fitted with anti-aircraft guns. The fighting stretched into the mid-afternoon in what appeared to be the most intense clashes the peninsula has seen in decades. The officials said scores of militants were besieging Sheikh Zuweid's main police station, shelling it with mortars and rocket-propelled grenades and exchanging fire with dozens of policemen inside.

Northern Sinai has over the past two years witnessed a series of complex and successful attacks targeting Egyptian security forces, many of which have been claimed by a local affiliate of ISIS. Two of the six checkpoints attacked Wednesday were completely destroyed, the officials said. Army checkpoints in the area routinely have between 50 and 60 soldiers. The ISIS statement said the two checkpoints were hit by suicide bombers.

The attacks came just two days after the assassination in Cairo of the country's top prosecutor, Hisham Barakat, and one day after President Abdel-Fattah el-Sissi vowed to step up a two-year crackdown on militants. Last week, ISIS spokesman Abu Mohammed al-Adnani called in an audio message on ISIS followers to launch massive attacks during the Muslim holy month of Ramadan, which is now entering its third week.
The Egyptian army has been pounding militants but has avoided launching a ground attack due to geographic difficulties and the fact that the militants cannot be distinguished from common residents. A night-time curfew is in force in northern Sinai but the streets are deserted by mid-afternoon. Internet and phone lines are disconnected for an average of 16 hours a day according to residents, and checkpoints dot the main roads. The Bedouin clans that form most of the region's population have long complained of the lack of jobs and opportunities that they say drives many locals into the tunnel smuggling trade.

Since Israel does not allow the importation of goods into Gaza through legal means, the residents on the Sinai Peninsula and in the Gaza Strip trade via the use of tunnels. While Egypt has destroyed most of the larger tunnels once used to smuggle cars and trucks, hundreds of smaller tunnels have evaded detection and their owners say they engaged in lucrative business transactions during Israel's 50-day war in Gaza over the summer. Under the terms of Egypt's 1979 peace accord with Israel, the Sinai is largely demilitarized. But Israel has regularly agreed to Egypt bringing in reinforcements to tackle the Sinai insurgency, and one Israeli official signaled there could be further such deployments following Wednesday's attacks.