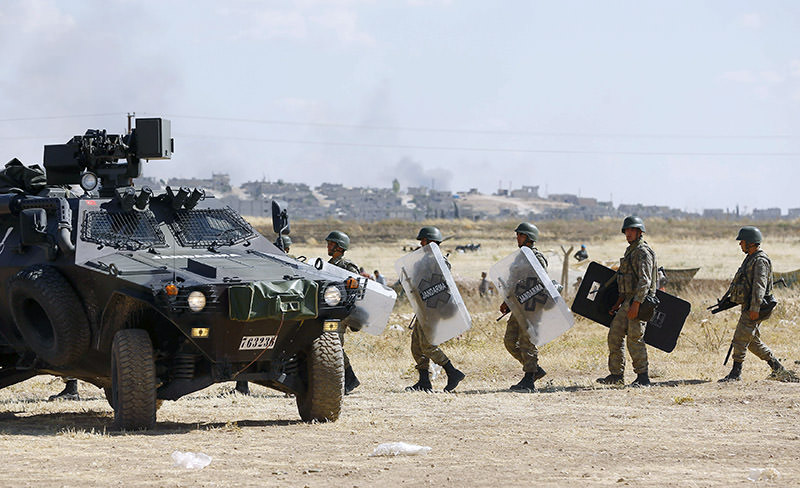 Turkish soldiers stand guard near the Mu00fcru015fitpu0131nar Border Gate in Suruu00e7, bordering with the northern Kurdish town of Kobani, in u015eanlu0131urfa province, Turkey, June 26, 2015 (Reuters Photo)
by Daily Sabah with AP Jul 01, 2015 12:00 am
The PKK-affiliated Democratic Union Party's (PYD) in Syria warned Turkey and stated that the Kurdish militia is ready to face any "aggression," should Turkey prepare a military intervention.

The statement by the PYD comes as Turkish media is abuzz with talk of a long-debated military intervention to push the self-proclaimed Islamic State of Iraq and al-Sham (ISIS) group back from the Turkish border a move that would also outflank any Kurdish attempt to create a state along Turkey's southern frontier.

Kurdish fighters backed by U.S.-led airstrikes have been on the offensive against ISIS in northern Syria for months, and is allegedly seking to bring together its cantons after its armed People's Protection Units (YPG) along with Free Syrian Army (FSA) factions took control of the northern city of Tal Abyad from ISIS.


The capture of Tal Abyad cleared the way for the Kurds to connect their stronghold in Syria's northeast to the once badly isolated border town of Kobani where they famously resisted a months-long ISIS siege and possibly extend it to the Kurdish enclave of Afrin in Syria's northwest.

"Any military intervention in Rojava will have local, regional and international repercussions and will contribute to complicating the political situation in Syria and the Middle East and threaten international security and peace," the PYD statement warned. Rojava is a term that refers to Syria's predominantly Kurdish region.

The PYD called on NATO members to prevent Turkey from carrying out any intervention. It added that Syria's Kurds want good relations with their neighbors and have no intention to set up an independent state.

Turkish President Recep Tayyip Erdoğan chaired a National Security Council meeting Monday which covered developments in Syria. The meeting came to the conclusion that actions to change the demographic structure through terrorist attacks targeting the civil population in northern Syria were worrisome. Turkey has frequently raised its concerns over a possible demographic change committed by Syrian Kurdish Democratic Union Party (PYD) forces in Syria's Tal Abyad where intense clashes with Kurds and ISIS have taken place.

Over 10,000 Turkmen and Arab Syrians, escaping the clashes between the two groups, have taken refuge in Turkey. Turkish officials have said that Arabs in the region have been pushed away as Kurds have flown in the area.

The rules of engagement regarding Syria have also been regulated accordingly for a cross-border operation against ISIS to give Turkish troops a freer hand to fire into Syria, which disintegrated after the outbreak of civil war in 2011.

The PYD statement said YPG fighters "are ready to repel any aggression by any party."