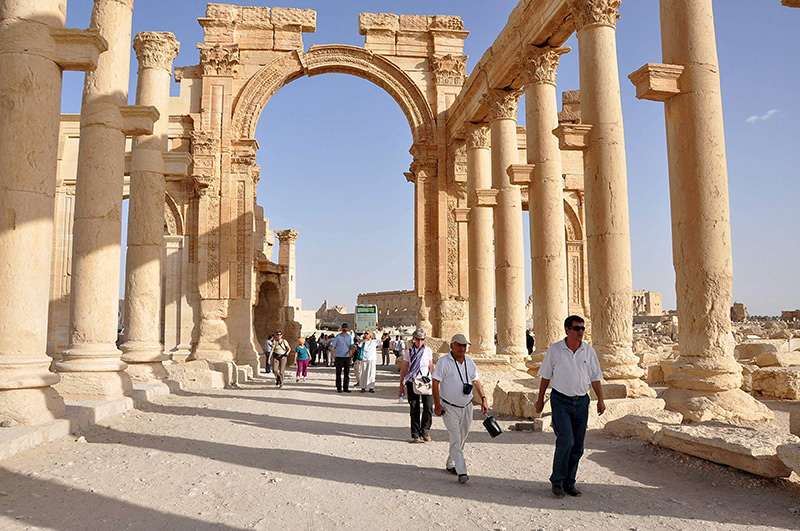 Tourists walk in the historical city of Palmyra, September 30, 2010. ISIS militants in Syria have entered the ancient ruins of Palmyra after taking complete control of the central city (Reuters Photo)
by Jul 02, 2015 12:00 am
The self-proclaimed Islamic State of Iraq and al-Sham (ISIS) militants are looting ancient sites across Iraq and Syria on an industrial scale and selling on treasures to middlemen to raise cash, Irina Bokova, the head of the U.N. cultural agency UNESCO said on Thursday.

One fifth of Iraq's about 10,000 official world-renowned sites were under ISIS control and heavily looted, and it was unclear what was happening in "thousands more" areas, Bokova told a meeting of experts in London.

Some sites in Syria had been ransacked so badly they no longer had any value for historians and archaeologists, and UNESCO was also increasingly worried about Libya, she said.

ISIS's self-declared caliphate contains some of the richest archaeological treasures on earth in a region where ancient Assyrian empires built their capitals, Graeco-Roman civilization flourished, and Muslim and Christian sects co-existed for centuries.

The militants deem the veneration of tombs and non-Islamic vestiges to be idolatrous and have posted videos of themselves destroying artefacts.

"The deliberate destruction, what we are seeing nowadays in Iraq and Syria, has reached unprecedented levels in contemporary history," Bokova told the Royal United Services Institute (RUSI) in London.

"This deliberate destruction is not only continuing, it is happening on a systematic basis. The looting of archaeological sites and museums, in Iraq particularly, has reached an industrial scale of destruction."

Such "cultural cleansing" was aimed at destroying humanity's common roots, she said, but was also a source of financing for militants who she said were charging local farmers to excavate sites and smuggling out artefacts which eventually made their way to private collectors around the world.

"Daesh (an acronym for the Arabic variation of ISIS) knows there's a financial upside of this activity and they are trying to gain from it. We know also that parties in the conflict are selling to certain dealers and to private collectors and to market end buyers."