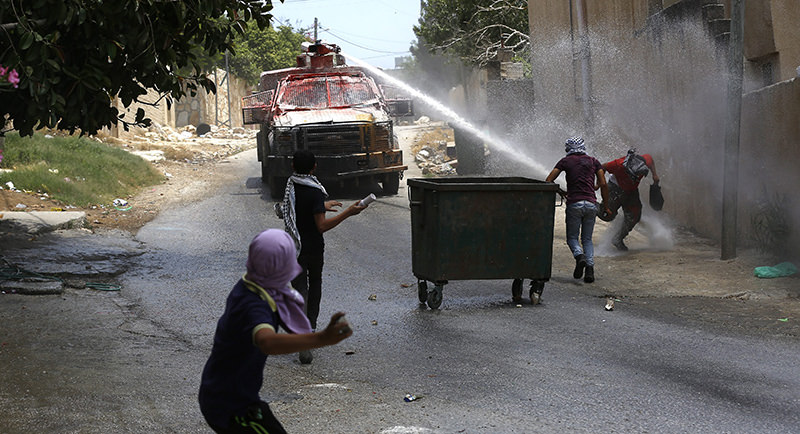 Palestinian protester hurl stones at Israeli Army water canon during clashes which following a protest against Israeli settlements in Qadomem, Kofr Qadom village, near the West Bank city of Nablus, 05 June 2015 (EPA Photo)
by Compiled from Wire Services Jul 03, 2015 12:00 am
Israeli soldiers shot dead a Palestinian teenager in the West Bank on Friday after he threw stones at their patrol, Palestinian medical and security sources said.

Mohammad Kosba, 17, was killed by two bullets after launching the stones at an Israeli military vehicle close to the Qalandia checkpoint, south of Ramallah, the sources said.

There were no clashes at the scene; two soldiers got out from their vehicle and one of them shot al-Ksbeh in the head, eyewitnesses said.

Ahmed al-Beitawi, director of the Ramallah Medical Center, told Anadolu Agency that Mohammad al-Ksbeh arrived at the hospital in critical condition after being shot.

An Israeli army spokeswoman said the soldiers had opened fire after their vehicle was damaged.

Thousands of Palestinians assembled Friday morning at a crossing point from the West Bank, trying to access Jerusalem for prayers in the Old City, according to Palestinian security sources.

The killing was the latest in a series of violent altercations since the start of Ramadan.