UN food agency cutting back on assistance to Syrian refugees 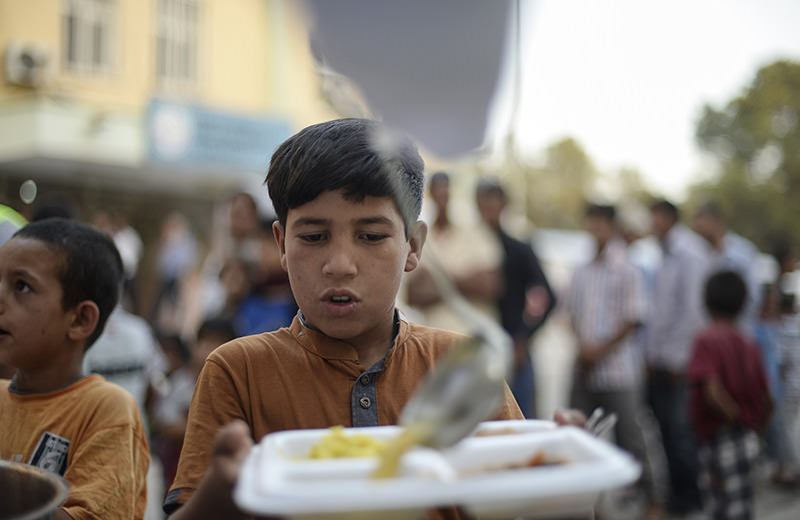 A young Syrian refugee lines up for food as Syrians break their fasting on June 20, 2015 in Aku00e7akale, in Turkeyu2019s u015eanlu0131urfa province, during the holy month of Ramadan (AFP Photo)
by Associated Press Jul 03, 2015 12:00 am
The United Nations' food agency is cutting back on assistance to thousands of Syrian refugees after an appeal for a ceasefire to enable Syrians feed themselves went unheeded, World Food Program Executive Director Ertharin Cousin said on Friday.

The WFP appealed in May for a humanitarian pause in fighting in Syria to let farmers harvest a bumper wheat crop in the country's northeast, an ISIS movement stronghold, and bring it to markets in Syria's west, including Aleppo and Homs.

Cousin said because there was no ceasefire, the wheat is being stored at the farming belt and will likely be sold in Turkey.

"We're very disappointed that the calls for a cease in the fighting to support the harvest was not heeded by the parties," Cousin told The Associated Press.

"That wheat that is harvested cannot be brought across lines of conflict into the area where it is needed most by people who are suffering now into a fifth year of this conflict," she added.

The WFP is grappling with a $193 million Syria-related funding shortfall in the next three months through September, including a $54 million shortage of donations for inside Syria, Cousin said.

WFP also supports refugees of conflict in Iraq, Turkey and Egypt. It had already reduced assistance to 1.6 million Syrian refugees in the five countries this year.

Cousin said the funding shortfall was a combination of increasing demand and waning generosity.

"Unfortunately what we are seeing is we have more people who are food insecure both inside and outside Syria because of the length of the conflict and we aren't receiving the resources that we received even last year at this time for the support of those refugees," she said.

In 2014, WFP globally received $5.4 billion in contributions, 27 percent more than in 2013. That was in response to an unprecedented number of emergencies in places including Syria, Iraq, South Sudan, Central African Republic and the West African countries affected by Ebola.

While the food shortage had improved in the Central African Republic, food insecurity in Yemen had this week been upgraded to crisis level, Cousin said.

"So we still have five major crises and 80 percent of those crises are directly related to conflict," she said.

Cousin said when she took the top WFP job in 2012, the focus was climate change-related crises such droughts and floods.

Cousin was speaking in the Australian capital of Canberra where Australia committed to donating 167.5 million Australian dollars ($128 million) over four year for the WFP to spend in the Indo-Pacific region. Cousin said that commitment was on par with a previous Australian agreement that it replaced.