Fighting between Syrian opposition, regime fiercest in Aleppo since 2012 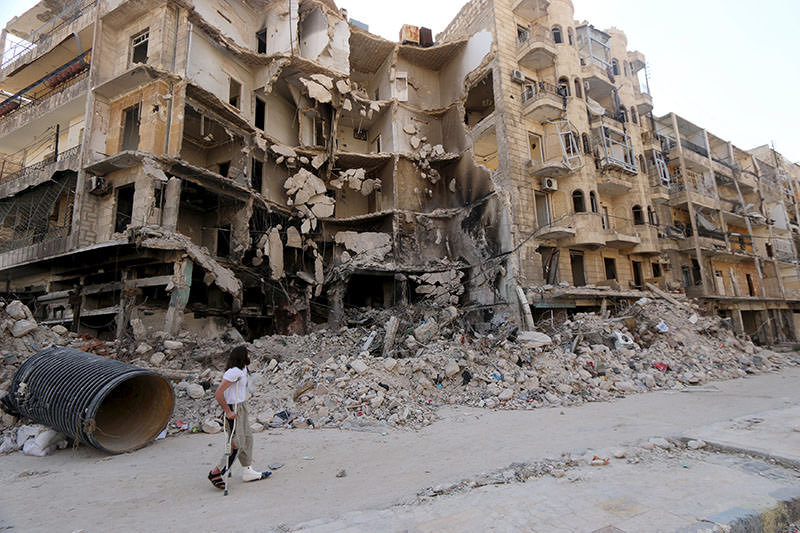 A man walks with the aid of a crutch past damaged buildings in the old city of Aleppo June 27, 2015 (Reuters Photo)
by Jul 04, 2015 12:00 am
Two coalitions of Syrian opposition forces battled to advance in government-held western Aleppo on Saturday, seizing an army barracks in one district but being pushed back in others.

The fighting in the country's former economic powerhouse is some of the fiercest since the Syrian conflict arrived in the northern city in mid-2012.

Elsewhere, government forces launched a major operation to recapture Zabadani, the last opposition-held town in the Qalamun region near Damascus.

It said fighters from the Conquest of Aleppo alliance of mostly moderate forces on Friday captured a former research center being used as a military barracks, opening up lines of attack against several nearby regime-held districts.

On Saturday, fierce clashes raged around the complex as regime forces backed by air strikes sought to recapture it.

Conquest of Aleppo and a second opposition grouping, Ansar al-Sharia began operations against government-held districts of Aleppo this week.

The attacks have prompted heavy fighting and bombardments, with opposition forces firing hundreds of rockets and the government launching dozens of air strikes.

The assault began Thursday, when Ansar al-Sharia attacked several neighborhoods including Zahra, where an air force intelligence facility is based.
The coalition initially made progress, but was pushed back by government forces Friday night, the Observatory said.

The monitor said regime warplanes carried out some 40 air strikes, and at least 29 Ansar al-Sharia fighters were killed on Friday.

There was no immediate toll for regime forces.

Thomas Pierret, a professor at the University of Edinburgh and a Syria expert, said the latest fighting could prove significant.

The recent progress of the opposition forces in and around western Aleppo "is the first real progress by the rebels in Aleppo since... July 2013," he said.

Control of the city has been largely divided between the government in the west and opposition forces in the east since shortly after fighting began there three years ago.

Front lines have remained fairly static since then, though both sides have at times sought to encircle the other by advancing in the countryside around the city.

Pierret said the loss of the barracks meant "the regime has lost an important line of defense, which leaves their control of west Aleppo more vulnerable".

But he said progress would not come easy for the opposition forces in west Aleppo, with its tall buildings ideal for regime snipers and its avenues wide enough for government tanks.

In the Qalamun region, government forces backed by Lebanon's Hezbollah began a battle to capture the last opposition-held town in the area, which lies north of Damascus on the Lebanese border.

The Observatory confirmed heavy fighting was under way between regime forces and their allies and opposition forces in the vicinity of Zabadani, which was one of the first towns to fall to the opposition in 2012.

It said at least 22 barrel bombs had been dropped on the town and its surroundings on Saturday alone, but had no immediate toll.

The battle was announced a day after opposition forces attacked an army outpost at the entrance to the town, which the regime responded to with some 90 air raids using barrel bombs and missiles.

Regime troops backed by Hezbollah have also recaptured most of the Qalamun region, which was once an opposition bastion.

In addition to Zabadani, opposition forces have bases in the mountainous part of Qalamun that spans the border, but Hezbollah has been gradually advancing in that region in recent weeks.

In nearby Damascus, opposition fire into the capital killed at least one person and wounded nine more, the official SANA news agency said.

Local residents said one of the rockets hit near the well-known Damas Rose Hotel, blowing out some of its windows but causing little damage otherwise.
Last Update: Jul 04, 2015 6:56 pm
RELATED TOPICS