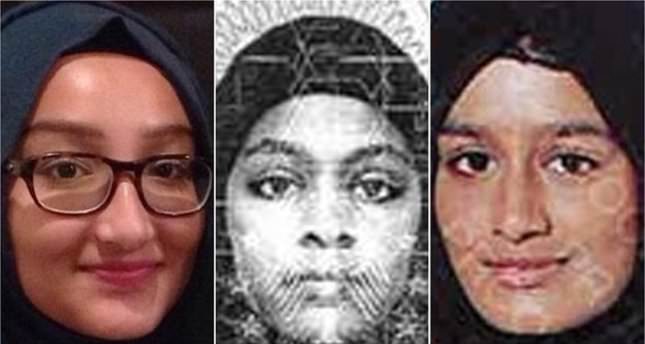 A handout combo photograph showing the three British schoolgirls who joined ISIS in February, 2015
by Daily Sabah Jul 04, 2015 12:00 am
The three British schoolgirls who left Bethnal Green Academy in east London in February for Syria reportedly to join the self-proclaimed Islamic State of Iraq and Sham (ISIS), have been spotted in the terrorist group's stronghold city of Raqqa while walking through the streets, the British daily Telegraph said in a news report published on Friday.

They were given a two-minute undercover video by Syrian activists, the daily reported, which shows that Shamima Begum, 15, Kadiza Sultana, 16, and Amira Abase, 15 were kept under close watch in an apartment in Raqqa and would soon be the militants' brides, once their loyalty to the movement was tested.

The video shows three women wearing niqab and hijab covering their bodies and faces, so it the activists' claim cannot be verified but the activists reportedly told the British daily that they had reliable 'tips'.

Since the incident of the British girls' leaving London to join ISIS has become public, Britain has come under fire for failing to spot the girls. Home Secretary Theresa May suggested that citizenship from Britons who fought for ISIS should be stripped. On 29 August 2014, the UK terror threat was raised from "substantial" to "severe".
Last Update: Jul 04, 2015 3:49 pm
RELATED TOPICS