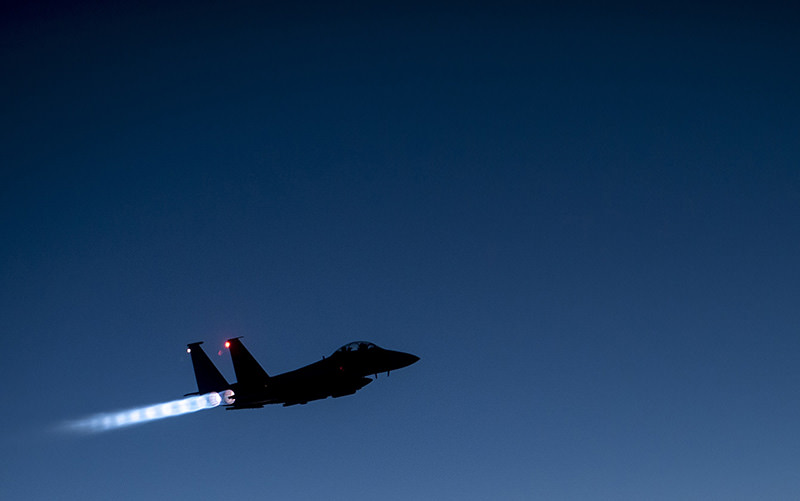 by Associated Press Jul 05, 2015 12:00 am
U.S.-led coalition aircraft unleashed a series of airstrikes targeting the self proclaimed Islamic State (ISIS) group's stronghold of Raqqa in eastern Syria in what the coalition said Sunday was one of its most sustained aerial operations carried out in Syria to date.

ISIS said at least 10 people were killed and many others wounded.

At least 16 airstrikes were reported late Saturday and early Sunday, triggering successive explosions that shook the city and created panic among residents, activists said. The U.S.-led coalition often targets ISIS-held towns and cities in Syria, but the overnight strikes on Raqqa were rare in their intensity.

In a statement issued early Sunday, the coalition said it had conducted 16 airstrikes throughout Raqqa, destroying vital ISIS-controlled structures and transit routes in Syria.

"The significant airstrikes tonight were executed to deny Daesh the ability to move military capabilities throughout Syria and into Iraq," said coalition spokesman Lt. Col. Thomas Gilleran, using the Arabic acronym for the ISIS group.

"This was one of the largest deliberate engagements we have conducted to date in Syria, and it will have debilitating effects on Daesh's ability to move" from Raqqa, he said.

Raqqa is the de facto capital of the so-called 'caliphate' declared a year ago by the ISIS terror group in territories it controls in Iraq and Syria. The sustained airstrikes add pressure on the militants in Raqqa, still reeling from last month's loss of the border town of Tal Abyad to Kurdish fighters. The town on the Turkish border was a major avenue for commerce and smuggling for the group.

A militant website said 10 people were killed and dozens of others wounded. An ISIS-affiliated Facebook page said one civilian was among those killed and 10 were wounded including women and children. It also said the bombing destroyed several bridges.

The ISIS-affiliated Aamaq news agency released a video of what it said was the effects of shelling Saturday by a U.S. drone on Raqqa. It showed several wounded men on a stretcher and at least three young boys being treated for wounds at what appeared to be a hospital.

A Raqqa-based anti-ISIS activist network reported eight civilians were killed by the coalition airstrikes, including a 10-year-old child.

The casualty figures could not be independently confirmed.

The network, called Raqqa is Being Silently Slaughtered, said at least one airstrike targeted a group of ISIS members in the city center. Another targeted an ISIS checkpoint while a third destroyed large parts of an ISIS-held brick factory in the city.

In the remote northeastern city of Hassakeh, ISIS suicide bombers detonated an explosives-laden truck near a main power plant Sunday. State-run news agency SANA reported casualties and damage in the plant on the southern edge of the city.

Fighting has raged in Hassakeh since the ISIS group attacked several southern neighborhoods held by government troops earlier this month. The violence has forced tens of thousands of residents to flee. The predominantly Kurdish city was split between government forces and Kurdish fighters, who have been fighting the ISIS group separately.

In Iraq, a Defense Ministry statement said government forces repelled an ISIS attack Sunday morning on the town of Haditha and the nearby Haditha dam in Anbar province. At least 20 militants were killed in the failed attack, said the statement, which did not provide any further information.

Iraqi forces, backed by Shiite militias, have been struggling to recapture areas lost to the ISIS group in the country's west and north.

In May, the militant group scored a stunning victory, overrunning Ramadi, the provincial capital of western Anbar province. Yet, Haditha and some other towns remain under control of government forces and allied Sunni tribal fighters.

In Lebanon, some 200 Kurdish nationals staged a demonstration in downtown Beirut in solidarity with their brethren in Syria who are fighting against ISIS militants.