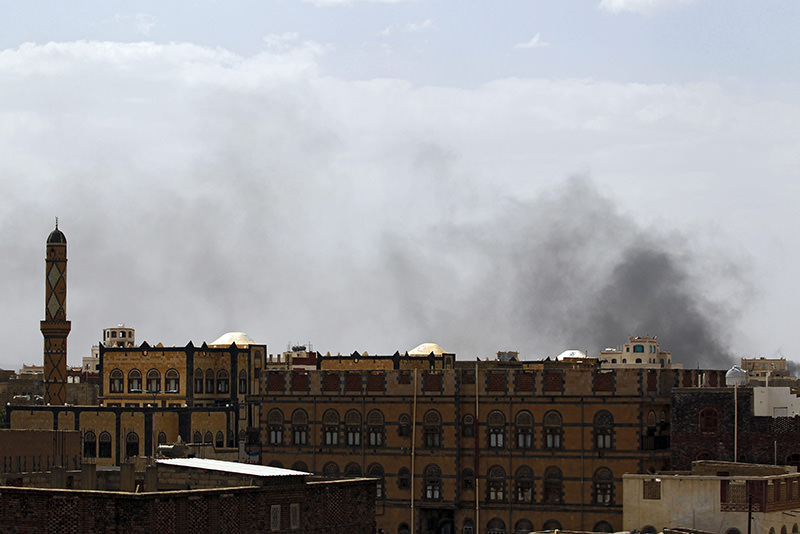 Smoke rises above the city after airstrikes allegedly carried out by the Saudi-led coalition hit positions held by the Houthis in Sana'a, Yemen, 05 July 2015 (EPA Photo)
by Jul 05, 2015 12:00 am
Fighting gripped in Yemen's second city Aden on Sunday as the UN envoy was expected in the rebel-held capital Sanaa to press his efforts to broker a ceasefire.

Aden was the last refuge of President Abedrabbo Mansour Hadi before he fled to Saudi Arabia in March and has been a key battleground ever since.

UN envoy Ismail Ould Cheikh Ahmed was due in Sanaa for talks with the rebels and their allies on his ceasefire plans.

After talks in Riyadh with the exiled government, he expressed optimism on Wednesday that a humanitarian truce could be agreed.

The same day, the United Nations declared Yemen a level three emergency, the highest on its scale.

More than 21.1 million people -- over 80 percent of Yemen's population -- are in need of aid, with 13 million facing food shortages.

More than 2,800 people have been killed in the impoverished Arabian Peninsula country since March, according to UN figures.
Last Update: Jul 05, 2015 3:54 pm
RELATED TOPICS