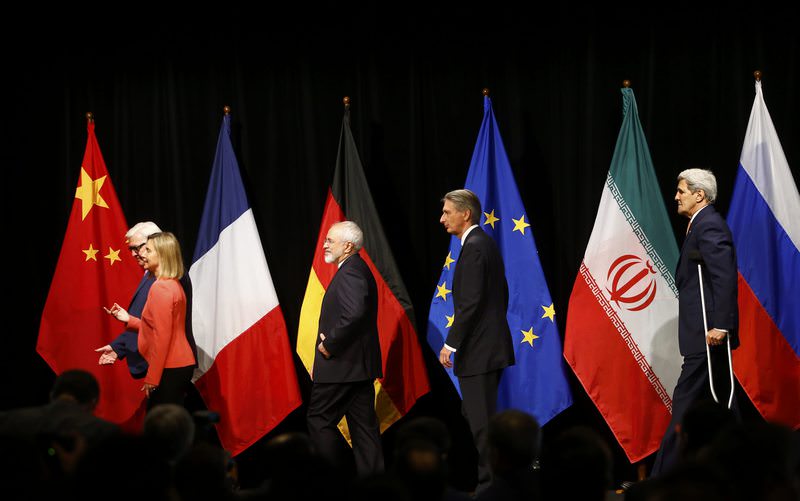 | REUTERS Photo
by Compiled from Wire Services Jul 14, 2015 12:00 am
Reactions from all around the world to the long-awaited Iran nuclear deal are pouring in. The world has almost split into two about the 12-year overdue deal: the majority says it is a historic deal, but some consider it a historic mistake.

European Union foreign policy chief Federica Mogherini who formally announced that Iran and six major powers had reached an agreement to curb the Iranian nuclear program in exchange for economic sanctions relief said in a news conference that "It is a great honor for us to announce that we have reached an agreement on the Iranian nuclear issue. This is a historic day ... because we have created the conditions for building trust and opening a new chapter in our relationship."

The British Prime Minister David Cameron hailed the deal and said "After persistent diplomacy and tough sanctions, the international community has delivered a historic deal with Iran, a deal which secures our fundamental aim to keep Iran from developing a nuclear weapon and that will help to make our world a safer place."

President Barack Obama also thanked European leaders for their help in reaching the nuclear deal with Iran. The White House stated that the agreed deal represents a historic solution that will verifiably cut off all the pathways Iran has to develop a nuclear weapon.

German Chancellor Angela Merkel, who was a party in the negotiations, also made positive remarks on the deal saying that the agreement provides a "realistic chance of overcoming one of the most difficult international conflicts through diplomatic means."

Meanwhile, the French President Francois Hollande also praised the deal and said that it shows the "world is moving forward" and added that "Iran must show that it is ready to help us end the (Syrian) conflict."

Syrian President Bashar al-Assad congratulated its regional ally Iran on the nuclear deal with world powers on Tuesday as well.

Perhaps the biggest welcome of all was from Iran, the home-country of the deal. "Today is a historical day ... the deal will help building confidence between Iran and the powers," said Iranian foreign minister Zarif. He emphasized that the agreement shows Iran's peaceful approach and Iran under no circumstances is trying to make nuclear weapons.

Iranians also poured onto the streets of Tehran after the Ramadan fast ended at sundown Tuesday to celebrate the historic nuclear deal agreed earlier with world powers in Vienna.

Hundreds of people taking to the capital's main throughfare, Vale-Asr Avenue, were seen happily cheering along the streets.
Egypt also agreed with the EU leaders and called the deal an important development that could lead to regional stability and head off an arms race.

The United Arab Emirates welcomed the agreement and stated that hey had been deeply skeptical of Iran's ambitions in the region, before the deal.

On the opposite end of the spectrum there is Israel who greeted the deal with horror. Israeli Prime Minister Benjamin Netanyahu blasted that the deal was a "stunning historic mistake" and pointedly noted that his country is not bound by the agreement. Netanyahu's comments have gained criticism from many, Germany in particular.

Earlier on Tuesday, Iran and the world powers reached a deal in the Austrian capital after marathon talks on Tehran's controversial nuclear program that has poisoned international relations for 12 years.

The agreement makes it almost impossible for Iran to build an atomic bomb for several years, in exchange for a gradual lifting from 2016 of international sanctions that have been suffocating the country's economy.