Iran nuke deal elicits relief and objection from around the world 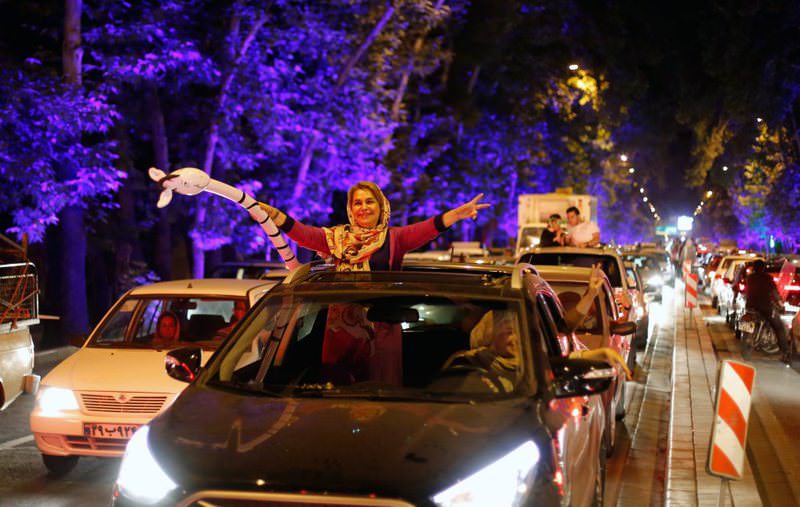 Iranians celebrate in the streets of Tehran, Iran, after nuclear talks between Iran and the six powers ended in Vienna.
by Daily Sabah with Agencies Jul 16, 2015 12:00 am

Following the long-awaited Iran nuclear deal, reactions from all over the world started to pour in. While the majority have called it a historic deal, Israel and Saudi Arabia say it is a historic mistake

As Iran and six major powers reached an agreement on Tuesday to curb the Iranian nuclear program in exchange for economic sanctions relief, reactions from around the world to the long-awaited Iran nuclear deal are pouring in. The world is almost split in two over the deal: The majority says it is a historic breakthrough, but some consider it a historic mistake.

After the announcement, Iranians poured onto the streets of Tehran to celebrate the historic nuclear deal agreed on earlier with world powers in Vienna. Young Iranian men and women danced in the streets in parts of Tehran, and motorists honked car horns to cheer the historic nuclear accord with world powers they hope will end years of economic sanctions and decades of international isolation. Millions of Iranians had followed the talks closely for months, anticipating that Tuesday's deal would allow the economy, battered by years of sanctions, to stabilize and make their daily lives easier. In the capital's affluent north, motorists played loud music from car stereos, and young people blew South African-style "vuvuzela" horns, scenes that Tehran normally witnesses only when the country qualifies for the football World Cup. "If you look at the street tonight, it's because we are happy," enthused Giti, a 42-year-old woman who has lived in Canada and the United States and who had been thinking of going back to North America before the deal was struck. "Maybe the economy is going to change, especially for the young people. I was thinking about leaving, but now I will stay to see what happens," she said.

While Iranians continue to celebrate the deal, Iran's supreme leader Ayatollah Ali Khamenei warned President Hassan Rouhani that "some" world powers are not to be trusted in implementing it. In a letter to Rouhani, Khamenei, who had the final word on the agreement, congratulated Iran's negotiators for "their tireless efforts."

Bringing the talks to a close was a "milestone," Khamenei said, but the agreement requires "careful scrutiny" before it is approved.

Meanwhile, Israel and Saudi Arabia have united over the deal. Saudi Arabia's Prince Bandar bin Sultan, a former head of the kingdom's intelligence services and its veteran ambassador to Washington, said on Thursday that Iran's nuclear deal will allow it to get an atomic bomb and "wreak havoc in the region, which is already living in a disastrous environment, whereby Iran is a major player in the destabilization of the region."

"The strategic foreign policy analysis, the national intelligence information and America's allies in the region's intelligence all predict not only the same outcome as the North Korean nuclear deal but worse," he said. Riyadh's public response to the deal was a short statement late on Tuesday that said it backed any agreement that would stop Iran getting an atomic bomb, but stressed the importance of strict inspections and the ability to re-impose sanctions.

On the other hand, Netanyahu, who suffered a major defeat in failing to stop a nuclear deal with Iran, called the deal a "historic mistake" and stressed that Israel would not be bound by the deal. On Wednesday, he declared that the agreement was "not the end of the story." "We are going to continue to denounce the danger in reaching an agreement with a dictatorial regime," he said. Netanyahu argues that the deal will not block Iran's path to nuclear weapons that could be used to target Israel and says the lifting of sanctions will allow it to further support proxy militants in the Middle East. Netanyahu, perhaps the fiercest critic of Obama's overtures to Iran, showed no sign he could be persuaded to even tolerate the agreement.

The deal also split the U.S. Congress in two. Facing the criticism of Republicans, U.S. President Barack Obama launched an aggressive and detailed defense of the landmark Iranian nuclear accord, rejecting the idea that it leaves Tehran on the brink of a bomb and arguing the only alternative to the diplomatic deal is war. "Either the issue of Iran obtaining a nuclear weapon is resolved diplomatically through a negotiation or it's resolved through force, through war," Obama said. "Those are the options." He also said that 99 percent of the world community and the majority of nuclear experts back the deal.

In Congress, resistance comes not only from Republicans, but also Obama's own Democratic Party. The president said he welcomed a "robust" debate with Congress, but showed little patience for what he cast as a politically motivated opposition. Lawmakers can't block the nuclear deal, but they can try to undermine it by insisting U.S. sanctions stay in place. London also started to seek to ease concerns over the deal on Thursday after Khamenei's warning that major powers are not to be trusted over its implementation. As part of an international charm offensive, British Foreign Secretary Philip Hammond was to meet Israeli Prime Minister Benjamin Netanyahu. After Hammond, U.S. Defense Secretary Ashton Carter is due in Israel next week. Israeli opposition leader Isaac Herzog is also due to visit Washington, partly to push for security guarantees.

In Washington, Secretary of State John Kerry was to hold talks Thursday with Saudi Foreign Minister Adel al-Jubeir, whose government has also been alarmed about the deal with its regional rival.
Last Update: Jul 16, 2015 8:29 pm
RELATED TOPICS