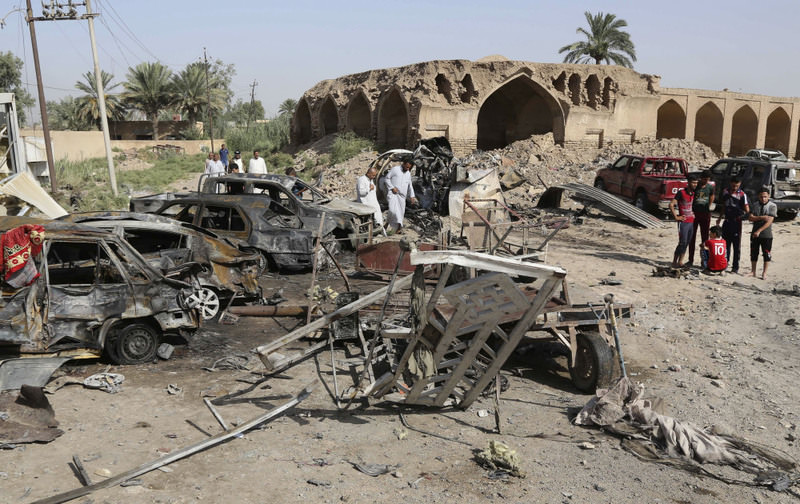 Civilians inspect the scene of a deadly Friday night suicide car bombing at a busy market in Khan Beni Saad, Iraq.
by Daily Sabah with Wires Jul 19, 2015 12:00 am

Suicide attacks by the ISIS left hundreds dead in Iraq and Gaza, overshadowing Eid-al Fitr, the feast that ends the Islamic fasting month of Ramadan

Different terrorist attacks targeted Gaza and Diyala province in Iraq on Friday and Sunday as people marked Eid-al Fitr, the feast that ends the Islamic fasting month of Ramadan. Iraq mourned its dead Saturday after one of the deadliest car bombs in its bloody history ripped through a busy market north of Baghdad and killed at least 115 and wounded 120 people. The suicide attack by the Islamic State of Iraq and al-Sham (ISIS) came as the country marked Eid al-Fitr. Residents recounted scenes of horror in the aftermath of Friday's attack, in which officials said at least 15 children were among the dead.

The blast left a huge crater in the main street of Khan Bani Saad, only 20 kilometers from Baghdad's northern outskirts in Diyala province. Several collapsed buildings were still smoldering 12 hours after the attack. "What we witnessed yesterday cannot be described. Fire, bodies, wounded, women and children screaming ... Khan is now a disaster zone," said Salem Abu Moqtada, 34, who sells vegetables in a market.

Iraqi Prime Minister Haider al-Abadi vowed to punish the "terrorist" perpetrators. "The terrorist gangs will have no place in our country," Abadi said. "They will not escape punishment. Their crimes increase our determination to hunt them." Local television footage showed bodies lying amid the rubble of devastated buildings and cars in flames. At least 50 stores and 75 cars were destroyed in the blast, said Mohammed al-Hamadani, a provincial council official. "What happened in the Bani Saad market is a massacre against innocent people," Hamadani said.

Local authorities canceled eid celebrations and declared three days of mourning. "We do not have an eid," said Hussein Yassin Khidayyer, a 45-year-old shop owner. The force of the blast threw him to the back of his shop but he escaped unscathed. "No one wished each other a happy holiday," he said.

Eid al-Fitr is one of the most important dates in the Islamic calendar and traditionally sees families gather to celebrate the end of a month during which many fast from dawn to dusk. ISIS said the attack targeted Shiite militias, a claim it often makes even when most of the victims are civilians. Iraqi government forces have in recent months stepped up their fight to dislodge ISIS from the country. Baghdad announced in January that Iraqi forces had liberated Diyala, significant parts of which had been overrun by ISIS after the group launched a brutally effective offensive in June 2014. They no longer have fixed positions in the province but have reverted to their old tactics of planting car bombs and carrying out suicide operations or hit-and-run attacks.

The United States condemned the attacks as "abhorrent." The bombing was "yet another painful example of the atrocities that the terrorist group ... continues to perpetrate against the people of Iraq," National Security Council spokesman Ned Price said in a statement Saturday. Outrage and grief poured in from countries supporting Baghdad's war against ISIS, with the United Nations' top envoy in Iraq, Jan Kubis, calling the attack "outside all boundaries of civilized behavior." Russian President Vladimir Putin also called it an "inhuman act of terrorism" while the British Foreign Office said it was a "heinous act."

On Saturday, the Iraqi military said its troops retook full control of a major university from ISIS in the volatile western Anbar province. "The troops, backed by Iraqi warplanes, were able to impose full control on Anbar University after fierce battles," an army officer told dpa. The officer, speaking on condition of anonymity, said that dozens of extremists were killed in the fight. But ISIS still controls large parts of mostly Sunni Anbar, about 118 kilometers west of Baghdad.

The extremist group also said in a statement on a social media site that it carried out an attack in north Sinai on military checkpoints that killed five members of Egyptian security forces on Saturday. The deaths occurred when several mortar rounds hit two checkpoints, security sources said earlier.

Only two days after the bloody attack in Iraq, at least four explosions rocked Gaza City, targeting cars belonging to members of Hamas. Police have not yet commented on the explosions in different areas of Gaza City. Even though the reports said that two people were injured in the attacks, casualties have not been officially confirmed. The charred vehicles were parked outside the houses of local officials in the Sheikh Radwan neighborhood. There was no immediate claim of responsibility, but witnesses said a freshly painted ISIS flag was seen at the site of the explosions. Hamas recently launched a fierce crackdown on alleged ISIS supporters in the tiny coastal enclave.
Last Update: Jul 19, 2015 9:50 pm
RELATED TOPICS