Aleppo struggles with war, all parts of city devastated 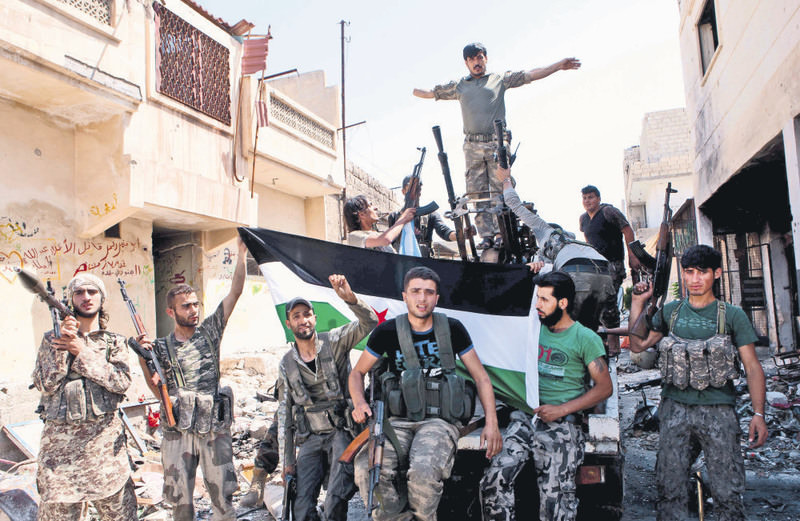 Members of the Free Syrian Army fighting against the Assad regime under harsh conditions show their strength in captured areas.
by Uğur Yıldırım Jul 20, 2015 12:00 am

As Aleppo is trapped between multiple battle fronts, Turkmens fight against the Syrian regime under harsh conditions on fronts hit with barrel bombs and artillery

The Aleppo Operation, which should have been conducted months ago by opposition forces under the Free Syrian Army, was postponed after President Bashar Assad's forces withdrew from the south and confronted opposition forces with the Islamic State of Iraq and al-Sham (ISIS). The "Conquest of Aleppo" operation, declared by the Syrian opposition with 20,000 fighters from 32 opposition groups on July 2 in order to completely remove regime forces from Aleppo, also failed to achieve its objective after ISIS attacked the opposition forces from behind. The Free Syrian Army captured the strategically important Scientific Research Center in Aleppo's important Jamiat al-Zahra neighborhood, on the first day of the operation. Preparing for a more massive attack, the Free Syrian Army had to dislocate the majority of its fighters to this region after ISIS attacked them from behind. Many opposition groups, particularly consisting of Turkmens, continue to fight against regime forces in Jamiat al-Zahra in the west, in Handarat in the north and in Suleiman Aleppo in the northeast. Amid failing clashes, which are still ongoing in the streets of Aleppo, the Assad regime continues to drop bombs on the city.

Around 55 percent of Aleppo is under the control of the Syrian regime, while 45 percent is under the control of opposition groups. Most of the center is under the control of regime forces, the north and west is under opposition control and the east and southeast is under ISIS control, while the Sheikh Maksut region is dominated by Democratic Union Party (PYD) forces. Strategic regions in central Aleppo such as Aleppo Castle, al-Qasr, al-Baladi, Azaziya, Nubbul-Zehra and Sehet Sadullah are controlled by regime forces. The neighborhoods where many Turkmens reside such as Holluk, Haydariya, Sheikh Feriz, Sheikh Hıdır and Saladdin are under the control of the Fatih the Conqueror Brigade and the Sultan Murad Brigade. Clashes between the Free Syrian Army and Syrian regime forces continue incessantly at strategic military points in the north of the city center such as Leyramun, Ashrafiya, Jamiat al-Zahra, Khalidiya, Saladdin Aleppo and Rashidin. The opposition fought against Iranian and Lebanese Hezbollah militants, who were deployed at vulnerable points in Aleppo in order to provide support to the Syrian regime, and has managed to capture many military bases and vulnerable points since July 2 when the operation was launched.

Turkmen Brigades, who initiated the first attempts to capture Aleppo from the Syrian regime in 2012 and still fight together with the Free Syrian Army on the front line against the regime, struggle to survive. Turkmens fight on three fronts in Syria: Against the Syrian regime, against ISIS who persecutes people living in Turkmen villages and the PYD. In Handarat and Suleiman Aleppo in the north and Rashidin in the west of Aleppo, clashes between regime forces and Turkmen fighters have continued for 24 hours. Struggling under harsh and insufficient conditions on the fronts ruined by barrel bombs and artillery fire, Turkmens can sometimes be as close as 50 meters away from the Syrian Regime. Clashes sometimes occur from one street to another and sometimes from one building to another. Fighters dig tunnels under the buildings constructed next to each other and dig holes through the walls so that they can advance step-by-step.

As the war continues on almost every street in the city, Aleppo residents struggle to survive in fear. People's biggest fears are sharp shooters and barrel bombs, which the regime forces drop randomly on civilians. People cannot go to places like mosques or bazaars out of fear of barrel bombs, as the warplanes drop bombs on every point where a crowd gathers. People who continue to live in war-torn Aleppo cannot run away from the barrel bombs, but they do find different solutions to get rid of the sharp shooters. They try to avoid sharp shooters by putting buses one on top of the other. To add to the ever-worsening conditions, a strike by regime forces cut the city's power and some neighborhoods have not been able to access water for 15 days. Residents try to get drinking water from wells and fountains as the temperature hits 40 C.
Last Update: Jul 22, 2015 3:45 am
RELATED TOPICS