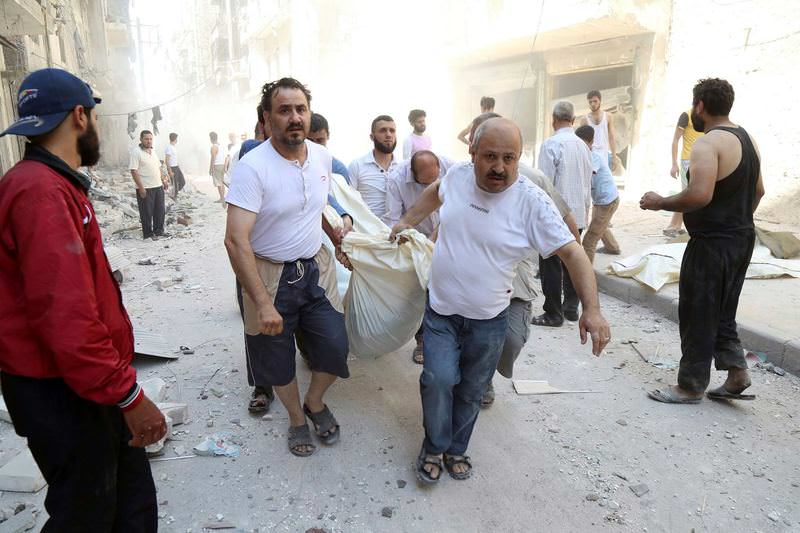 Syrians carry the dead bodies of their relatives in Aleppo after a barrel bomb was dropped by regime.
by Daily Sabah Jul 22, 2015 12:00 am

The Syrian people faced continuous Assad attacks during Eid al-Fitr. At least 68 people were killed by barrel bombs dropped from Syrian army helicopters in the last three days in Aleppo. A report released by the Syrian Network for Human Rights (SNHR) said that 157 people were killed in Syria during Eid al-Fitr between July 17 and July 19. According to the SNHR report, 124 of the casualties were civilians. Anadolu Agency reported that 63 people died in aerial attacks on Monday alone. The percentage of women and children killed was 48 percent, a strong indicator that Assad's forces are deliberately targeting women and children, the report said. According to the SNHR, Assad's forces committed five massacres in three days. The report said that 36 children and 24 women were killed by barrel bombs and air strikes that targeted residential areas in Syria. Also in the attacks, 19 fighters were killed. According to the four-page SNHR report, the Syrian opposition also attacked. The SNHR said that both the Islamic State of Iraq and al-Sham (ISIS) and the al-Nusra Front were responsible for killing civilians. ISIS killed four civilians, including two women and one child. In addition, the al-Nusra Front killed two children, report said.

The SNHR is a London-based independent organization. The organization consists of about 120 members that work both inside and outside Syria. The SNHR issues daily reports on human rights violations and documented deaths.

As the war continues on almost every street in the city, Aleppo residents are struggling to survive. The Syrian people's biggest fears are sharp shooters and barrel bombs, which regime forces drop randomly on civilians. People cannot go to places like mosques or bazaars out of fear of barrel bombs, as the warplanes drop bombs anywhere a crowd gathers. People who continue to live in war-torn Aleppo cannot run away from the barrel bombs, but they do find different solutions to deal with sharp shooters. They try to avoid sharp shooters by putting buses one on top of the other.

In March 2011, Syrians were emboldened enough to raise their voice against the dictatorship of Bashar Assad. However, the regime's response was not as peaceful as the protests, and the country was subsequently dragged into a deadly civil war after opposition groups took up arms against the government. The Syrian civil war has now entered its fifth year and has caused the deaths of more than 200,000 people with at least 60,000 missing. The war has also displaced nearly 10 million people. While international and regional powers continue endless discussions, reportedly, the Syrian regime continues to use chemical weapons. About 13.6 million people, equivalent to the population of London, have been displaced by conflicts in Syria and Iraq, many without food or shelter, the UN refugee agency said. The 13.6 million include 7.2 million displaced within Syria – an increase from a long-held UN estimate of 6.5 million – as well as 3.3 million Syrian refugees abroad, 1.9 million displaced in Iraq and 190,000 who have left to seek safety. The vast majority of Syrian refugees have fled to Lebanon, Jordan, Iraq and Turkey. Western countries have frequently been criticized by aid agencies and the UN for not opening their borders to Syrian refugees, as the most developed countries have received the least number of refugees.
Last Update: Jul 22, 2015 1:17 am
RELATED TOPICS