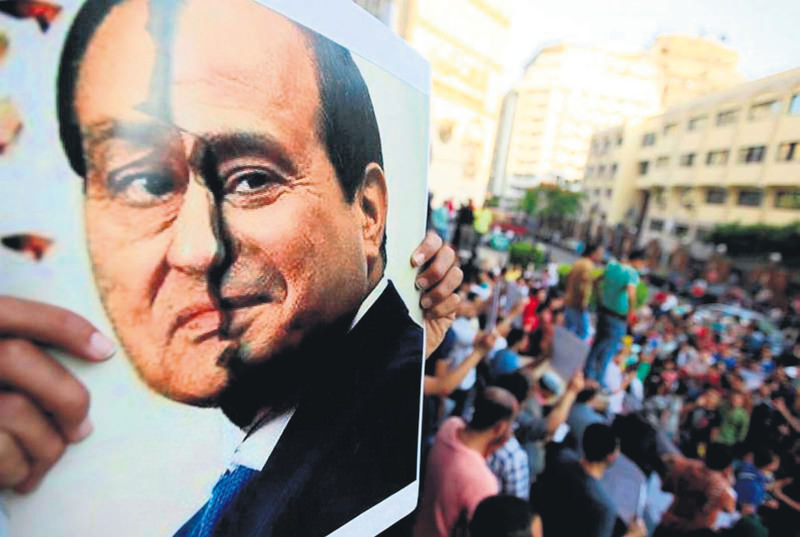 One of the thousands of Egyptians who protest el-Sissi and the coup almost every Friday across the country holds a sign.
by Cihangir Yıldırım Jul 23, 2015 12:00 am

After the coup in July 2013, Egyptian President Abdel-Fattah el-Sissi continues to gain legitimacy with international visits despite reported human rights violations. Sissi avoids answering questions over human rights abuses and attempts to legitimize human rights violations under the pretext of combatting terrorism, as the Muslim Brotherhood has been labeled a terror organization. In July 2011 before Mohammed Morsi's election and the bloody military coup, people were hopeful, and a few, including Muslim Brotherhood members, expected a coup by the military in the coming years. However, Morsi was not welcomed by the U.S., Israel or the oil-rich Gulf countries. Sissi, who was a general at the time serving as the Chief of the Armed Forces, enjoyed the unconditional support of the Gulf countries and the silence of world powers, including the EU, the U.S. and Russia while ousting Morsi. Turkey was the only country that rejected Sissi's rule. U.S. Secretary of State John Kerry said that the Egyptian army was restoring democracy by overthrowing the democratically elected president. Gulf countries, especially Saudi Arabia, which were afraid of seeing a similar picture in their countries of a popular uprising demanding democracy, welcomed the coup as well. After Sissi took power, the international community weakly voiced its concern about human rights violations, mass death sentences, arbitrary detentions and the suppression of opposition groups, despite repeated warnings from rights groups.

Last week, Egypt received a delivery of three Rafale fighter warplanes, ordered as part of a $5.6 billion dollars deal with France. Ehab Badawi, the Egyptian ambassador to Paris, and Dassault Aviation CEO Eric Trappier attended the official ceremony in the Dassault Aviation test center in the Istres Air Base in southeast France. Egypt ordered 24 warplanes in a deal announced by French President François Hollande last February. Egyptian pilots have been trained by the French special air force. The deal also included an advanced naval frigate and military equipment including antiballistic missiles and surface attack capabilities. Cairo hopes to boost its military armaments due to threats from the Islamic State of Iraq and al-Sham (ISIS) militants in its Sinai Peninsula, armed groups from Libya and the Hamas-controlled Gaza Strip. French Defense Minister Jean-Yves Le Drian said that the warplanes were delivered rapidly in order to ensure the safety of the Suez Canal, which is an important point of world trade connecting the Mediterranean Sea and the Red Sea.

Ties between the U.S and Egypt were suspended after Morsi's ousting. The impaired relations with the administration of the U.S. President Barack Obama were restored with a new military assistance deal. Obama announced that the U.S. will provide $1.3 billion dollars of military aid to Egypt per year. Also the U.S. military aid packet for Egypt included 12 F16 warplanes, replacement kits for 125 Abram tanks and 20 Boeing Harpoon missiles. On the restored ties between Egypt and the U.S., Bernadette Meehan, the National Security Council spokeswoman, said in a statement that Egypt will remain the second-largest recipient of U.S. foreign military financing following Israel. Meehand also underlined that the military assistance to Egypt is "in the interest of U.S. national security."

Saudi Arabia and other Gulf countries remained silent as they did before over mass human right violations in Egypt under Sissi's rule as the countries had supported the coup, pledging billions of dollars in aid. The Gulf, especially Saudi Arabia, was afraid of a similar popular uprising in their own countries that could bring their dynasties to an end and replace them with an Islamist government like that of the Muslim Brotherhood of which Morsi was a member. After Morsi was ousted, the United Arab Emirates (UAE) provided mass economic aid to Egypt. The UAE gave $6 billion and more than 22 billion dirhams ($80.8 billion) in cash and interest-free loans to guarantee fuel supplies and fund projects in health care, education, food, housing and transport. Last year the UAE contractor Arabtec began talks with Egyptian officials to build one million low-cost homes, one of Egypt's most pressing needs. Egypt in our Hearts, a campaign established by Emirates Red Crescent in mid-July 2013 on the orders of UAE President, Khalifa bin Zayed al-Nahyan, has provided aid in the form of food, medicine and educational assistance to thousands of needy Egyptians. Last December, the UAE also approved 78 health centers, 25 grain silos, railway crossings, 1,488 housing units and hundreds of schools to be built in a few years. The project coordination office for UAE development projects has begun a campaign that aims to train at least 100,000 Egyptians for employment. According to the office, 25,000 Egyptians have been trained so far and 10,000 of them have found jobs.

Russian President Vladimir Putin also announced deals worth $3.5 billion between Egypt and Russia in February 2015 including the building of the first nuclear power plant in Alexandria. Boosting the natural gas trade, creating a Russian industrial zone along the Suez Canal and purchasing Russian arms were included in the deals. Russian Rostvertol Mi-35 attack helicopters are also part of the package. Egypt already has nearly 100 aircraft and the older Soviet-era Mi-8 helicopters, which have troop-transport, cargo, signals-intelligence and attack variants, the latter equipped with 23 mm guns and a 500 kg capacity for bombs and antitank guided missiles.

Turkey had backed Morsi, and along with Qatar, is the only country that opposed the coup and Sissi's rule. Both countries are known for their support of the Muslim Brotherhood, and especially President Recep Tayyip Erdoğan has harshly criticized the coup and Sissi and declared support for Morsi. The Gulf countries, except Qatar, have explicitly supported Sissi as they considered Muslim Brotherhood rule a threat.

Morsi and many other prominent political figures who were members of the Muslim Brotherhood were arrested after the coup. Sissi claimed protesters were threating national security and finally gave the order to disperse demonstrators, resulting in the death of 817 in Rabaa Square, which has become a symbol for Morsi supporters. Thousands of people have been arrested and tortured according to reports published by rights groups such as Human Rights Watch. Over 1,400 people have been killed and 16,000 others have been detained in the crackdown since Morsi was overthrown by the Egyptian army, the U.K.-based Arab Organization for Human Rights reported.
Last Update: Jul 23, 2015 9:33 pm
RELATED TOPICS