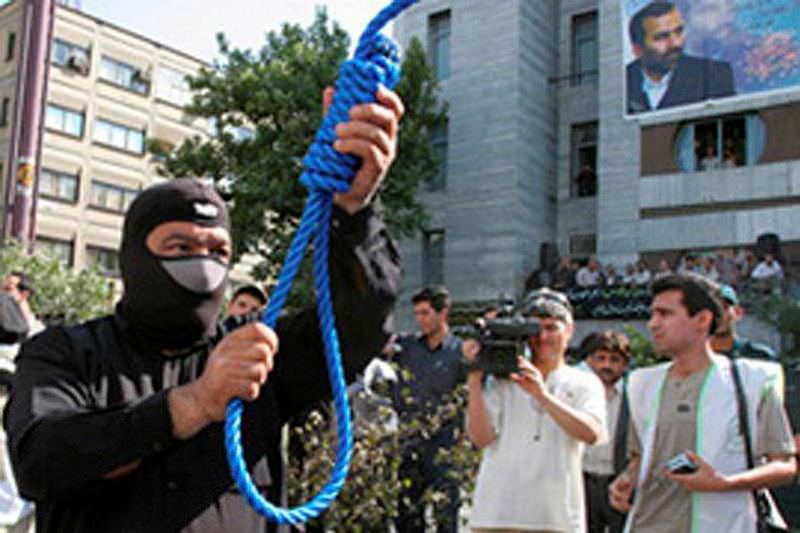 A hangman is preparing noose for a public execute in Iranian capital, Tehran.
by Daily Sabah with AFP Jul 24, 2015 12:00 am

Amnesty International a human rights group, has criticized Iran for its continuous executions. Statistics indicate that three people are currently being executed every day. The death penalty is also frequently applied in Saudi Arabia, which statistically follows Iran

Prominent London-based human rights group Amnesty International protests what it calls a "staggering execution spree," with almost 700 executions taking place in the last six months in Iran. "Iranian authorities are believed to have executed an astonishing 694 people between Jan. 1 and July 15, 2015. At this shocking pace, Iran is set to surpass the total number of executions in the country," Amnesty International said. It is estimated that more than 1,000 people will be executed in 2015. Also, Amnesty describes the judicial system in Iran: "Deeply flawed, detainees are often denied access to lawyers, and there are inadequate procedures for appeal, pardon and commutation." According to Amnesty, executions in Iran did not stop during the Muslim holy month of Ramadan. At least four people were executed during Ramadan.

Also, Saudi Arabia ranked in the top five countries worldwide for the number of executions in 2014, Amnesty said. Saudi officials reported the 100th execution for 2015 in June in Saudi Arabia, with 51 of those executed being Saudi citizens, while others were from Yemen, Pakistan, Syria, Jordan, India, Chad, Eritrea, Sudan and Burma. The escalation of death sentences causes concerns that trials are not conducted lawfully. According to AFP, 87 people were executed in Saudi Arabia in 2014. According to Amnesty, the record execution number was 192 in 1995.

But unlike in Saudi Arabia, executions in Iran "did not even stop during the Muslim holy month of Ramadan," when at least four people were put to death "in a departure from established practice," Amnesty said. It said death sentences in Iran were "particularly disturbing because they are invariably imposed by courts that are completely lacking in independence and impartiality." Trials in Iran are "deeply flawed, detainees are often denied access to lawyers, and there are inadequate procedures for appeal, pardon and commutation," Amnesty said. "Iranian authorities should be ashamed of executing hundreds of people with complete disregard for the basic safeguards of due process," said Boumedouha. Amnesty said the reasons for this year's "shocking surge in executions is unclear, but the majority of those put to death in 2015 were convicted on drug charges."
Last Update: Jul 24, 2015 10:03 pm
RELATED TOPICS