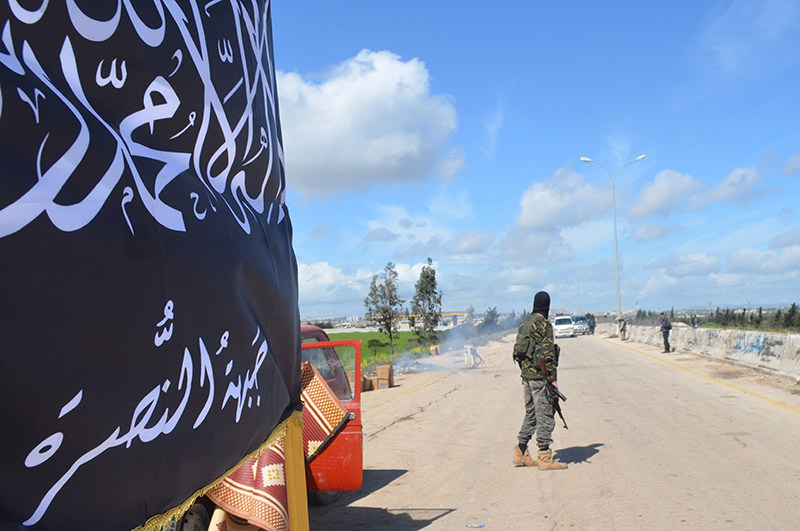 Members of al-Qaida's Nusra Front man a checkpoint in Idlib (March 2015) (Reuters Photo)
by daily sabah
Jul 29, 2015 12:00 am
Reports have claimed that the al-Qaida linked Al-Nusra Front has detained 18 U.S. trained Syrian rebels, including Syrian Turkmen Colonel Nedim Hassan, -who is allegedly the leader of the U.S train-and-equip program-, and field commander Farhan Jasim near the Syrian city of Aleppo on Wednesday.

Pentagon said on Wednesday that the Al-Nusra abductees are not members of U.S. train and equip program.

"While we will not disclose the names of specific groups involved with the Syria Train and Equip program I can confirm that there have been no New Syrian Force personnel captured or detained." Pentagon spokeswoman or Cmdr. Elissa Smith told Daily Sabah.

One Turkish senior official speaking to Daily Sabah on Thursday also confirmed that there was no detention or abduction of US-trained Syrian rebel forces. "Those detained by Al-Nusra are not part of train and equip program", the official said.

It was claimed that the Syrian opposition members who were returning from the train-and-equip program from Turkey were cut in by the Nusra militants, and were allegedly detained on the grounds that they are cooperating with the U.S.

The first group of (FSA) soldiers, who trained in the central Anatolian Kırşehir province as part of the train-and-equip program, completed their training and crossed into Syria on July 12. The convoy of 30 vehicles and 54 men crossed the Turkish border and were expected to join opposition forces to fight ISIS at the Savran front in northern Aleppo.

The 30th Division, established by nine opposition groups from the Free Syrian Army (FSA), was commanded by Colonel Nedim Hasan, a Turkmen defector from the Syrian army, who is aided by the Syrian Group Captain Sahir Mustafa.

The U.S. and Turkey signed an agreement in February to train and equip moderate Syrian opposition forces and after months of delay due to logistical issues the program started in Kırşehir in May. The program was to take place in Turkey, Jordan, Saudi Arabia and Qatar, but so far it has taken place in Turkey and Jordan only. A total of 154 men were trained by both Turkey and Jordan under the 30th Division, which was established by the U.S. to specifically fight ISIS. One-hundred men completed the 54-day training in the camp in Jordan and returned to their country 20 days ago. Fifty-four men who completed their 74-day training in Turkey were granted permission to cross into Syria on July 12. The U.S. equipped the men with 30 pick-up trucks, middle range weapons such as DShK, along with M16 assault rifles and a vast quantity of ammunition.

According to the agreement between the U.S. and Turkey, groups of 300 to 2,000 FSA soldiers were planned to be trained, but only 54 have been trained. Pentagon officials recently reported the program is moving slower than expected due to complications in vetting volunteers and transporting them from Syria for training. Moreover, Turkish media outlets recently reported that dozens of moderate opposition fighters have withdrawn from the program after they refused to sign a contract assuring that they would not fight against the Syrian regime. Many Syrian volunteers prefer to use their training to fight both ISIS and forces loyal to Syrian President Bashar Assad, which was the original aim of the revolution before it got complicated.