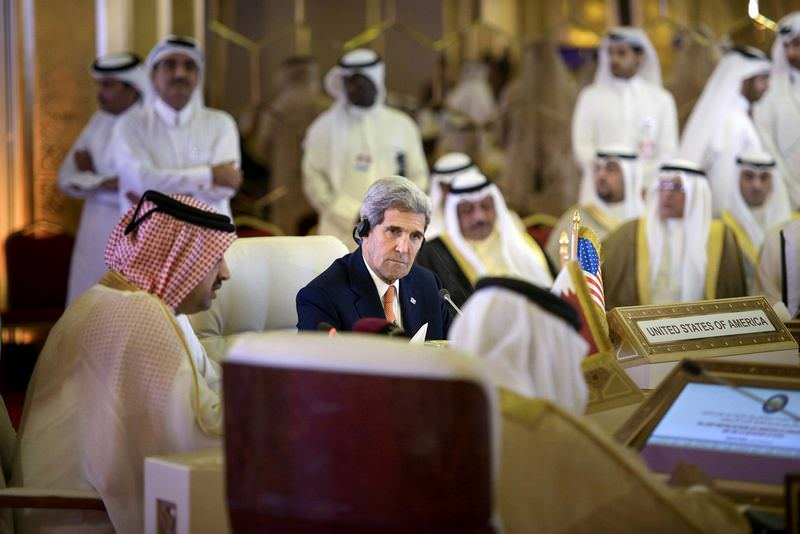 John Kerry visited Doha to convince Gulf countries, especially Saudi Arabia, that the nuclear deal with Iran does not pose a threat to their political and economic interests

U.S. Secretary of State John Kerry brought the Obama administration's case for the Iran nuclear deal to wary Arab officials in Qatar on Monday. Kerry was meeting with the foreign ministers of the Gulf Cooperation Council, the six-member bloc of Sunni-ruled Gulf Arab nations that fear Shiite Iran's increasing assertiveness in the region and the implications of the agreement. In addition to Iran, the ongoing conflicts in Syria, Iraq and Yemen were high on the agenda. Opening the meeting, Qatari Foreign Minister Khalid al-Attiya said the gathering was being held in "very exceptional circumstances and challenges that have been unprecedented." "We are facing many challenges in our communities and we are aiming to achieve peace and security and stability with the help of the United States," he said. He stressed the importance of keeping the region free "of any threats of nuclear weapons" and "the importance of the use of nuclear energy and technology for peaceful purposes" only.

Al-Attiya spoke of the urgency of resolving the crises in Syria, Yemen and Iraq, but also complained that "the Middle East is suffering from the failures of the peace process due to the Israeli occupation" of Palestinian land. He accused Israel of "intransigence" in dealing with the Palestinians and said it must end its "illegal blockade of Gaza." "We call on the United States of America to exert more efforts to go back to the peace process," he said before journalists were ushered out of the room.

Kerry, who did not speak while reporters were present, is not traveling to Israel on this trip and U.S. leverage with the current Israeli government is limited, given Prime Minister Benjamin Netanyahu's vehement and vocal opposition to the Iran deal. U.S. officials rejected suggestions that Kerry was not visiting Israel this week because the administration has given up hope on convincing Netanyahu of the merits of the agreement. Kerry's main goal, however, is to follow up on a May meeting that President Barack Obama hosted for Arab leaders at Camp David. At that meeting, Obama promised Bahrain, Kuwait, Oman, Qatar, Saudi Arabia and the United Arab Emirates enhanced security cooperation and expedited defense sales to guard against a potential Iranian threat.

Just last week, the State Department authorized the sale to Saudi Arabia of $5.4 billion in Patriot missiles and related equipment along with $500 million in ammunition. Saudi Arabia is the largest and most influential member of the council and has been publicly supportive of the Iran deal, albeit with reservations. Kerry has acknowledged concerns about Iran's behavior in the Middle East but says it would be easier to deal with if Iran does not develop a nuclear weapon. He said the agreement struck by world powers with Iran in Vienna last month is the best way to do that. "Iran is engaged in destabilizing activities in the region and that is why it is so important to ensure that Iran's nuclear program remains wholly peaceful," he said on Sunday in Egypt before flying to Qatar. "There can be absolutely no question that the Vienna plan, if implemented, will make Egypt and all the countries of this region safer than they otherwise would be."

Kerry's visit to Qatar follows one last week by Iranian Foreign Minister Mohammad Javad Zarif, who also stopped in Kuwait and Iraq to present Tehran's side of the nuclear deal. In a column published Monday in Lebanon's Arabic daily As-Safir, Zarif called on Arab countries to work with Tehran for the good of the region. He said the Vienna agreement "does not hurt our neighbors but is rather a gain for all our region by putting an end to needless tensions that lasted 12 years." "Permanent security cannot be achieved by endangering the security of others," he wrote, proposing setting up a regional gathering for dialogue whose aim would be to respect each country's sovereignty and independence.

After intense and tense negotiations, Iran and the P5+1 reached a final agreement to curb Iran's so-called nuclear program and removing the international sanctions that cost Tehran billions of dollars every year. While Iran and the world powers involved in the negotiations were happy with the result, Israel aggressively called the deal "a historic mistake." The Gulf countries, especially Saudi Arabia, remained silent, but the silence is believed to be a show of displeasure. Considering Iran as the biggest threat in the region, the nuke deal worries Saudi Arabia and other tiny Gulf countries. Kerry's visit aims to convince the Gulf countries to the idea that the nuclear deal with Iran does not pose any threat to these countries' national security or economic benefits from oil sale. However, Iran and Saudi Arabia are at a proxy war in both Yemen and Syria over supporting different actors. Since the nuke talks started, Saudi Arabia has always expressed its concerns.
RELATED TOPICS