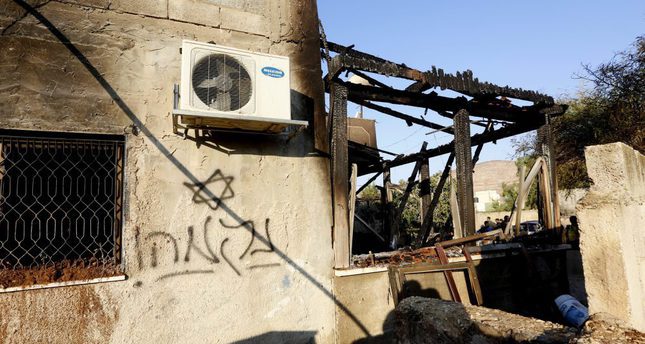 by Mehmet Çelik Aug 05, 2015 12:00 am
The arson attack in the West Bank Palestinian home, where an 18-month-old baby was burned to death, was committed by the extremist Jewish settler group, moved by religious motivations to accelerate the coming of Messiah, Israeli Yaridoth Ahronoth (YnetNews) reported.

The attack was committed by 'hilltop youth', a youth branch of the extremist group 'Price Tag', which wrote 'revenge' on the wall of the home burned down. The 'hilltop youth' has recently been formed across West Bank and commits attacks for the 'Price Tag', the report has said.

The extremist group seeks to increase the crisis in the Middle East and trigger new attacks which will 'bring redemption and the coming of the Messiah closer.' The group aims to form a Jewish state on the occupied Palestinian territories based on Jewish moral values that are derived from Jewish religious sources.

In last week's attack on a Palestinian home, a baby was burned to death and three other members of the family were injured. The attack has been condemned by the international human rights groups, Palestinian and Israeli politicians.

In the occupied West Bank territories, nearly 60 percent has been under full control of the Israeli military. Although Israeli settlements are considered illegal under international law and international community's continuous pressure on Israel against the illegal settlements, The Israeli government has been approving projects to construct new settlements as the extremist Jewish group put pressure on the government. The conflict between Israel and the Palestinians have been ongoing since the occupation began as a result of the Six-Day War of 1967. The occupied territories include the West Bank, East Jerusalem, parts of Golan Heights and the Gaza Strip,

Israel launched an offensive military attack against the Gaza Strip in July 2014, which according to official United Nations figures killed 2,104 Palestinians, including 1,462 civilians of whom 495 were children and 253 women.

During the Israeli war on Gaza, 69 Israelis, including four civilians, were also killed. The Israeli Defense Forces launched Operation Protective Edge on July 8, 2014, and the war continued for 50 days, during which 108,000 people had their homes destroyed or severely damaged as a result of thousands of artillery and tank shells fired into mostly residential areas of Gaza. In addition, public buildings such as schools and hospitals were also among the places attacked by Israeli airstrikes.
RELATED TOPICS