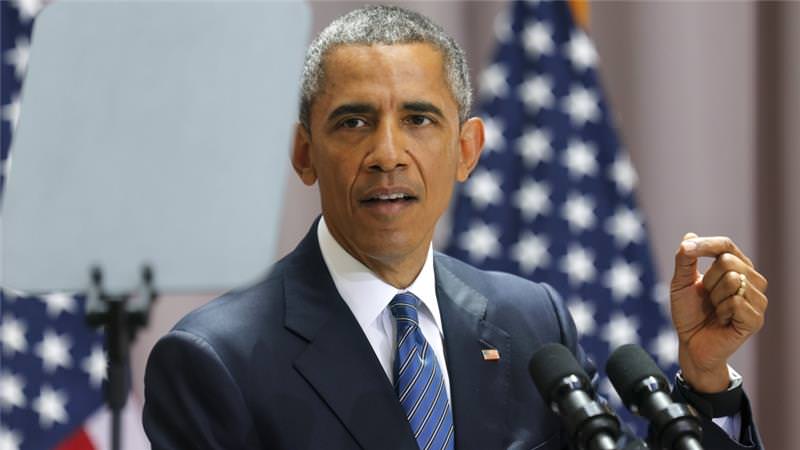 Obama said every nation in the world that has commented publicly, with the exception of Israel, had expressed support.
by Daily Sabah with Wires Aug 07, 2015 12:00 am

Following a call by Israeli Prime Minister Netanyahu on the Jewish lobby to block the nuclear deal with Iran, U.S. President unprecedentedly slammed the PM, saying ‘he is wrong,' and warned of consequences of abandoning the deal

President Barack Obama told U.S. Jewish leaders it was likely rockets would fall on Tel Aviv if a nuclear deal with Iran was blocked and military action ensued, one of them said on Wednesday. In a separate appeal to American Jews, Israeli Prime Minister Benjamin Netanyahu, a fierce opponent of the July 14 accord, pushed back in a webcast on Tuesday against the Obama administration's argument that the agreement was the only way to avoid eventual war with Iran. The Republican-led U.S. House of Representatives will vote on whether to reject the agreement when lawmakers return to Washington in September, party leaders said on Tuesday, setting up a showdown with the president. Greg Rosenbaum, one of 20 Jewish leaders who met Obama at the White House on Tuesday, said on Israel Radio that the president spelled out what exercising a U.S. military option to strike Iran's nuclear facilities would mean if the deal between world powers and Tehran was scrapped. "He said military action by the United States against Iran's nuclear facilities is not going to result in Iran deciding to have a full-fledged war with the United States," Rosenbaum, of the National Jewish Democratic Council, quoted Obama as telling the forum. "'You'll see more support for terrorism. You'll see Hezbollah rockets falling on Tel Aviv.' This is what he said would happen if the U.S. had a military strike on Iran," Rosenbaum said, referring to the Iranian-backed Lebanese guerrilla group and its long-range missile arsenal.

In another speech, Obama said "It is a very good deal. Every nation in the world that has commented publicly with the exception of the Israeli government has expressed support. I recognize Prime Minister Netanyahu disagrees, disagrees strongly - I do not doubt his sincerity - but I believe he is wrong."

Israeli President Reuven Rivlin said on Thursday tensions between Prime Minister Benjamin Netanyahu and US President Barack Obama has him "worried" because "for the first time I see that we are in isolation." "Yes, I am very concerned about the front that has been opened up between Obama and Netanyahu [and its impact on] relations with the United States," Rivlin said. "The prime minister has waged a campaign against the US as if the two sides were equal," the president said. "And this is liable to hurt Israel itself. I must say that he understands the US better than I do, but, nonetheless, I must say that we are quite isolated internationally." "When you have a prime minister and a president of democratic countries such as the US and Israel turn into hawks, this concerns me greatly," Rivlin said. "I'm not an alarmist, but for the first time I see that we are isolated."

The relations between Israel and the U.S. are in an unprecedented era as it has become visible that the two countries are disappointed with each other's some policies. Netanyahu holds a hardliner position regarding the nuclear talks with Iran, whereas the Obama administration seeks diplomatic solutions. Furthermore, the U.S. administration continuously voices concerns over the construction of new settlements by the Israeli government in the occupied territories and invites Israel to engage in a two-state solution to the conflict between Israel and Palestine, though this seems unlikely given the recent formation of, perhaps, one of the most right-wing coalition governments in Israel's history. The rising tensions between the two historically allies' leaders, which have surfaced recently, have resulted from a serious of diplomatic confrontations which has contributed to the souring of the relations. In addition, it is no secret that Netanyahu and Obama have not been the closest friends, as one would expect from the leaders of the states that are such strong allies.
RELATED TOPICS