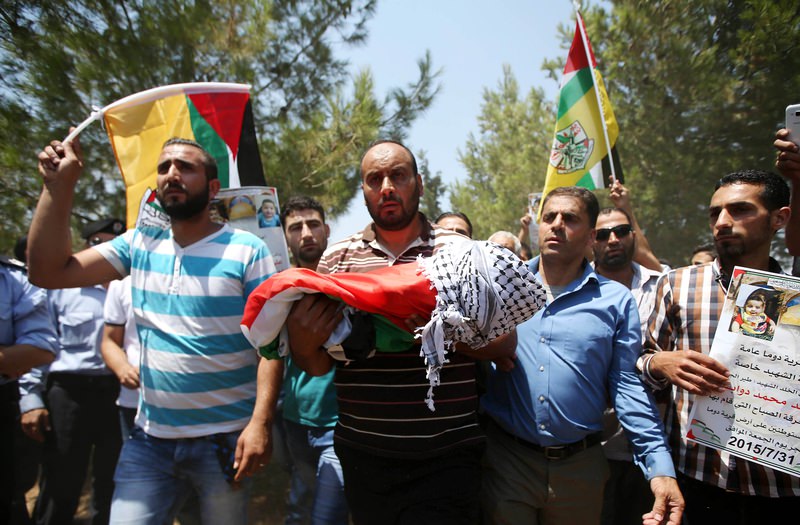 Palestinian man carrying killed baby's body
by Aug 08, 2015 12:00 am
The father of a Palestinian toddler killed when their home was firebombed by Jewish extremists last week died of his injuries Saturday, bringing a Hamas call for "confrontation" with Israel.

The arson attack in the village of Duma in the occupied West Bank triggered angry Palestinian protests and an international outcry over Israel's failure to curb violence by hardline Jewish settlers.

Saad Dawabsha died in hospital in the southern Israeli city of Beersheba where he was being treated for third degree burns, Palestinian official Ghassan Daghlas said.

Dawabsha's wife Riham and four-year-old son Ahmed are still fighting for their lives in another Israeli hospital after the arson attack which killed 18-month-old Ali on Friday of last week.

Israeli media reported that there had been signs of improvement in Ahmed's condition, although his life remains in danger.

They said that doctors at the Tel Hashomer hospital near Tel Aviv on Friday removed the respirator to which he had been attached for the previous week and that he opened his eyes and recognised those around him.

Neither Israeli hospital could immediately be reached for comment on the Jewish sabbath.

The family's small brick and cement home in the occupied West Bank village of Duma was gutted by the fire and a Jewish Star of David spray-painted on a wall along with the words "revenge" and "long live the Messiah".

"Nothing will stop these murderous settler attacks and... we cannot wait until they come into our villages and our homes," Hamas spokesman Hossam Badran wrote on Facebook from his base in Qatar on Saturday.

"Our people in the West Bank have only one choice: that of open and comprehensive confrontation against the occupation."
Israeli public radio reported that the army was on the alert for possible unrest in the West Bank and for "Palestinian revenge attacks."

The United Nations called on both sides to work together for calm.
"Political, community and religious leaders on all sides should work together and not allow extremists to escalate the situation and take control of the political agenda," UN Special Coordinator for the Middle East Peace Process Nickolay Mladenov wrote in a statement.

"I reiterate the secretary general's call for the perpetrators of this heinous terrorist act, which was universally condemned, to be brought swiftly to justice," he added.

Palestinian officials said that Saad Dawabsha was to be buried in Duma on Saturday afternoon after a post-mortem in the nearby city of Nablus.

One official told AFP that the pathologist's findings would be submitted in evidence to back up a complaint to the International Criminal Court (ICC) in The Hague.

The Palestinians on Monday submitted a request to the ICC to probe the firebombing and "settler terrorism".

At a meeting with Palestinian president Mahmud Abbas on Wednesday, Arab foreign ministers agreed to call on the UN to protect the Palestinians from "terrorist crimes" by Jewish settlers.

Israel this week used a controversial form of detention without trial normally invoked for Palestinians against one alleged Jewish extremist, following the outcry over the attack.

The domestic intelligence service named him as Meir Ettinger, a grandson of Meir Kahane, a rabbi who founded the racist anti-Arab movement Kach and was assassinated in 1990 in New York.
He was arrested in Safed in northern Israel "because of his activities in a Jewish extremist organisation", a Shin Bet spokesman told AFP.

Police said Ettinger, who is aged around 20, was suspected of "nationalist crimes" but did not accuse him of direct involvement in the firebombing.
Last Update: Aug 08, 2015 11:35 pm
RELATED TOPICS