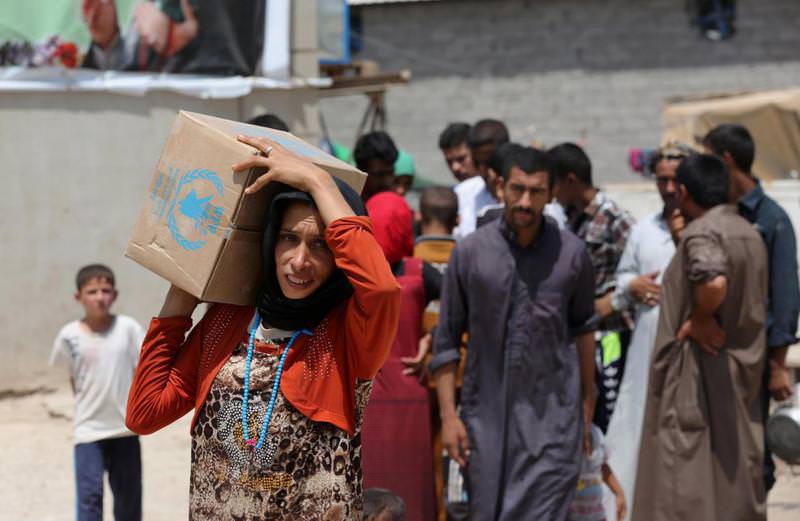 Suffering from the presence of ISIS and its terror activities, Iraqis now face the problem of food shortage despite the government's efforts to reverse the problem. Iraqis have called on the government to amend poor governance to increase the effectiveness of its policies

The U.N.'s humanitarian coordinator for Iraq said that a major shortage of aid funding for Iraq threatens food assistance relied on by more than 2 million people. Officials said the problem is caused by the Islamic State of Iraq and al-Sham (ISIS), which overran around a third of Iraq last year, sparking a conflict that has displaced millions of people and cutting food supply routes. "The food pipeline, which is keeping more than 2 million people alive, was broken in October. We've got about eight weeks before it breaks," Deputy Special Representative of the United Nations Assistance Mission for Iraq Lise Grande told Agence France-Presse (AFP) in Baghdad. "The food pipeline right now provides supplemental support to families that are food insecure. So what we would expect to see when that pipeline breaks is that food insecurity ... is going to increase, there's no question about this, dramatically," Grande said. "On June 4, the United Nations launched an appeal for half a billion dollars to tackle the spiraling humanitarian crisis in Iraq, where conflict has displaced more than 3 million people since the start of 2014," AFP reported.

"Of the $500 million that we asked for, more than $100 million has been received to date," and other countries have said they want to help, Grande said. "We're confident that tens of millions more dollars will be coming, but by our own calculation, we're still only halfway there," she said. And $500 million is the absolute bare minimum required: "We presented the most pared to the bone humanitarian appeal that had ever been launched in this region," Grande said. "We estimate that a million people who would have been receiving some kind of support are not going to be because we've had to close these programs. It's devastating," Grande said. "The lack of funds has already taken a toll on aid programs, causing 184 of 220 frontline healthcare programs to be shuttered," AFP reported.

Iraq has seen several problems including the terror activities committed by ISIS as well as corruption allegations as thousands of people have demonstrated against the government. Prime Minister Haider al-Abadi abolished three vice presidency and a deputy prime ministry positions on Sunday in the hope that poor governance will be amended and corruption will be prevented.

A June Wall Street Journal (WSJ) report said: "The United Nations Food and Agriculture Organization said that Iraq faces serious food-security concerns because of labor shortages and disruptions in transportation and marketing, which are expected to significantly impact harvests, domestic production and supply. The agency warned that lack of security is making food access more difficult for the poor and displaced – a problem that will only grow with food prices likely to rise." "Food already costs 58 percent more in Anbar than in Baghdad," the report added. "Government officials insist they had made efforts to modernize irrigation in southern Iraq to reverse output declines before ISIS began its campaign last summer," WSJ said, and quoted Mahdi Thamad al-Qaisi, the deputy minister of agriculture for technical affairs: "Iraq had a plan in 2014 to reach self-sufficiency in producing grain, mainly wheat."

The WSJ report also highlighted the water problem and said: "Water problems also predate the past year's fighting. The water situation became worse after ISIS's blitz through northwestern Iraq last June. The militants reduced the flow of water through a dam near Ramadi, the capital of Anbar province, on the Euphrates River. In April, the group opened a dam near the city of Fallujah, also in Anbar, to flood the surrounding desert in an effort to halt the advance of Iraqi security forces."

However, Iraqis say they suffer from corrupt governance and government promises are not fulfilled. Therefore, Abadi called for an end to sectarian and party quotas for government positions, the reopening of corruption investigations and the reassignment of officials' security details to the Ministry of Defense and the Ministry of the Interior.
RELATED TOPICS