Egypt beefs up security on anniversary of Rabaa massacre 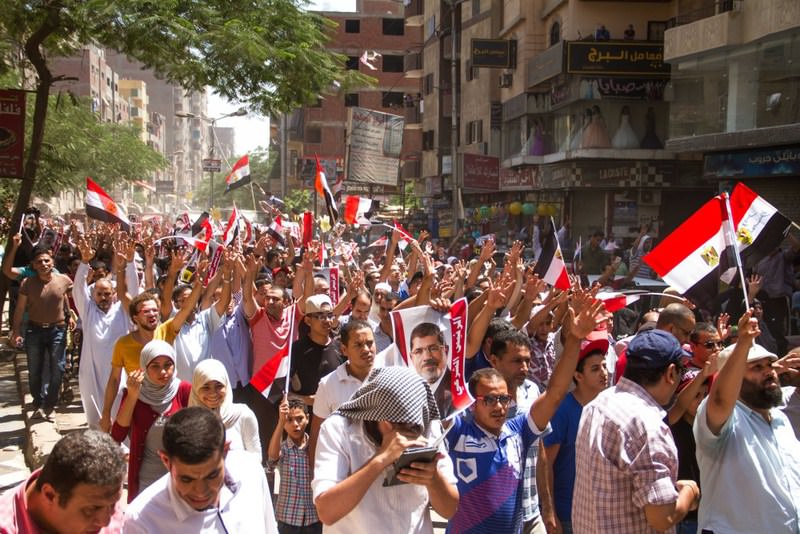 Members of the Muslim Brotherhood hold up pictures of their ousted President Mohammed Morsi during a protest two years after hundreds were killed in a single day by Egyptian troops.
by Daily Sabah with Agencies Aug 15, 2015 12:00 am

Two years after more than 1,000 pro-Morsi supporters were killed by Egyptian forces, police bolstered their presence in anticipation of protests to mark the second anniversary of the deadly event

Egyptian police had previously beefed up security in the capital in anticipation of protests on the second anniversary of the systematic and widespread killing of pro-Morsi demonstrators by Egyptian security forces in July and August 2013 in which hundreds died.

The Rabaa al-Adawiya mass killings, when police shot dead at least 1,000 Morsi supporters on Aug. 14, 2013, as they dispersed a protest camp, has remained a rallying point for the country's harried opposition and has been called one of the worst days in Egyptian history. Egyptian authorities had tightened security measures in main squares and around vital installations ahead of the anniversary. The Ministry of Interior has warned that security forces would use force to counter "any attempt to cause chaos." Police officials said they were deploying on the main streets and at government buildings amid calls for protests to remember the event, one of deadliest of the Arab Spring. Two years later, no policemen have faced trial over the incident, but leaders and members of Morsi's Muslim Brotherhood have.

On Thursday, the pro-Morsi National Alliance for the Defense of Legitimacy called on supporters to stage week-long protests as of Friday to mark the anniversary. The 6th of April Youth Movement called on the public to write their memories of the infamous day on social media so that the "murderous regime and its media do not fabricate it." "Even though we disagreed with the political demands of the protest camps, we cannot deny that what happened during the dispersal of the Rabaa and Nahda sit-ins was a massacre," the group said on Friday via its Facebook page. "A massacre that no one can deny [except] those who lack human values, a conscience and principles." Human Rights Watch (HRW) said in a report released on Tuesday based on a year-long investigation "probably amounted to crimes against humanity."

The New York-based group on Friday called on the United Nations Human Rights Council to launch an inquiry into the killings. "Washington and Europe have gone back to business with a government that celebrates rather than investigates what may have been the worst single-day killing of protesters in modern history," deputy Middle East director for HRW, Joe Stork, said. "The U.N. Human Rights Council, which has not yet addressed Egypt's dangerous and deteriorating human rights situation, is one of the few remaining routes to accountability for this brutal massacre," he added. The Paris-based International Federation for Human Rights also urged an independent investigation.

In Egypt, however, the government has always defended the dispersal. Morsi ruled for only a year before mass protests prompted the military to overthrow and detain him. He has since been sentenced to death. El-Sissi, the former army chief, had pledged to eradicate the Muslim Brotherhood. The group has been blacklisted and most of its leaders arrested, severely restricting its ability to mobilize followers in protests. Meanwhile, to mark the anniversary, hackers attacked the website of Cairo's International Airport, posting a message promising to pursue the culprits behind the deadly dispersal.

On Aug. 14, 2013, huge crowds gathered in Rabaa Square in Cairo to protest the Egyptian military coup and at around 6:00 a.m., protesters were praying in the square and in Adawiya Mosque, which was heavily damaged by government forces. Protesters in support of the country's first democratically elected president, Mohammed Morsi, and pro-democracy protesters did not leave the streets. They chanted slogans against coup leader and current President Abdel-Fattah el-Sissi and the coup. El-Sissi claimed that the protesters were threatening national security, and called on his supporters to hold counter protests in Tahrir Square, the epicenter of the Arab Spring protests in Egypt. El-Sissi finally gave the order to clear Rabaa Square, which had become the pro-Morsi protesters' main area.

The Rabaa massacre was considered to be the bloodiest so far, with death toll estimates ranging from 800 to more than 1,000. The HRW 188-page report titled, "All According to Plan: The Rab'a Massacre and Mass Killings of Protesters in Egypt," documents the way Egyptian security forces fired on crowds. "In Rab'a Square, Egyptian security forces carried out one of the world's largest killings of demonstrators in a single day in recent history," said Kenneth Roth, executive director of HRW. While the Muslim Brotherhood claims that the death toll was more than 1,500, the HRW report said there was a minimum of 817 deaths.
RELATED TOPICS