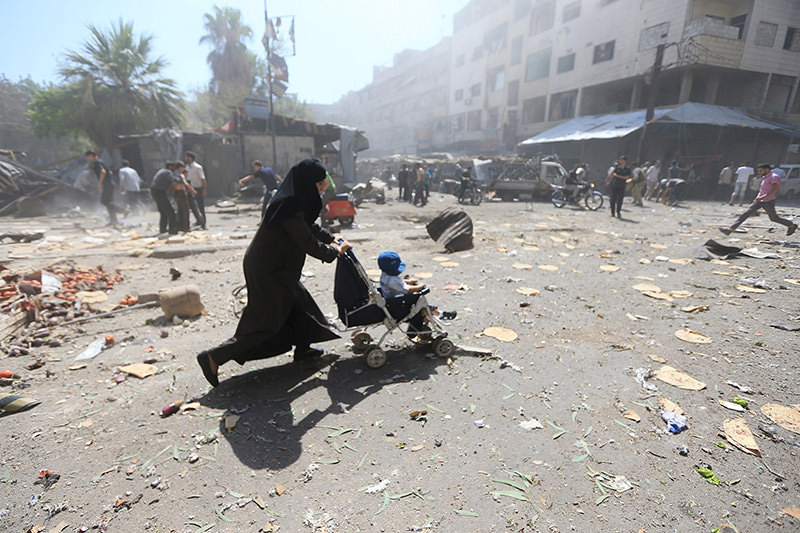 A woman pushes a baby stroller as she rushes away after what activists said were airstrikes by forces loyal to Syria's President Bashar al-Assad on a busy marketplace in Douma neighborhood of Damascus, August 12, 2015 (Reuters photo)
by Aug 16, 2015 12:00 am
Syrian government air strikes killed at least 82 people in an opposition-held town outside Damascus on Sunday, causing carnage in what the opposition called a "massacre".

In makeshift clinics in Douma, lifeless bodies were lined up on a bloody tile floor, waiting to be wrapped in makeshift shrouds, an AFP photographer said.

The deaths came as the UN's new humanitarian chief visited Syria for the first time since his appointment in May.

The Syrian Observatory for Human Rights, a Britain-based monitoring group, said regime warplanes had carried out at least 10 strikes on Douma, most of them hitting a marketplace.

The group said that at least 250 people were wounded, with civilians accounting for most of the dead.

Observatory director Rami Abdel Rahman said locals had gathered after a first strike hit the market to help evacuate the wounded when the additional raids hit.

At least six raids hit the market, with the others striking nearby in the Centre of town, Abdel Rahman said.

The AFP photographer described the attack as the worst he had covered in Douma, which lies in the rebel bastion of Eastern Ghouta.

In a makeshift clinic, whole sections of floor were covered with rows of dead bodies as medics worked nearby to treat the wounded, among them screaming children.

Frantic residents brought in waves of injured, who were treated on chairs, beds and the floor if necessary as the clinic overflowed with patients.

Eastern Ghouta is the regular target of government air strikes and has been under siege for nearly two years, with regime forces tightening the blockade since the start of 2015.

Amnesty International earlier in the week accused the government of committing war crimes in Eastern Ghouta, saying its heavy aerial bombardment of the area was compounding the misery created by the blockade.

The group also accused rebels in the area of war crimes for firing rockets indiscriminately at the capital.

Sunday's strikes on Douma came as new United Nations humanitarian chief Stephen O'Brien held talks with government officials in Damascus on his first trip to Syria since being appointed.

Official news agency SANA said O'Brien had expressed willingness to work with the government to alleviate humanitarian suffering in the country.

Close to 12 million people have been uprooted by Syria's conflict, with more than four million becoming refugees and another 7.6 million internally displaced.

On Saturday, O'Brien met the deputy foreign minister and visited the central city of Homs, which is now mostly under government control.

"We are committed to continuing to support humanitarian efforts in Syria. Equal access to all people in need (is) vital for our work," he added.

Elsewhere, the Observatory said at least 27 opposition fighters and 15 government forces had been killed in battles since Saturday around the village of Tasneen, in central Homs province.

The fighting there began after a truce involving two government-held villages in Idlib province and a rebel bastion near Damascus broke down.

The truce for the villages of Fuaa and Kafraya and the town of Zabadani crumbled on Saturday morning after negotiators failed to reach a broader deal.

Fighting in all three areas continued on Sunday, with rebels firing missiles into Fuaa and Kafraya and government and allied forces battling the opposition in Zabadani.

The group, known as Division 30, is among the units participating in a US-led programme in Turkey to train forces to fight ISIS.

But after the first 54 members of the force entered Syria in July, Al-Nusra kidnapped 13 of them, including a commander, and at least three more were killed in clashes with the group.

Al-Nusra accused the force of serving US interests and paraded several of the captives in a video.