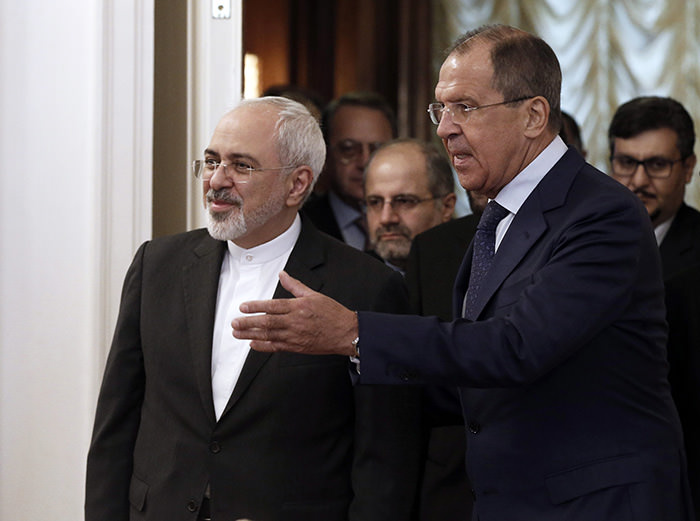 Iranian Foreign Minister Zarif met with Assad on August 12 in Syria's capital Damascus, discussing possible peace scenarios that would end the war in Syria, without Assad's removal despite the killings of more than 300,000 civilians by regime forces.

"Our states hold a common position on regulating the Syrian crisis," Zarif, speaking through a translator, said at a joint news conference with Lavrov and added that, "The Syrians must themselves decide their fate and their future, and foreign states should only make this easier," AFP reported.

"If some of our partners believe that we should necessarily agree in advance that at the end of an interim period the president will leave his post - this position is not acceptable for Russia," Lavrov also said.

On Sunday, in an air strike by Syrian government forces more than 100 civilians were killed in a town outside Damascus.

A Syrian opposition group termed the killings of more than a 100 civilians in Douma a 'massacre', as it was deliberately targeting the civilians in a market place.

The attack was condemned by The Syrian Observatory for Human Rights, a Britain-based monitoring group, that also said Assad forces carried out at least 10 strikes on Douma, which left at least 250 people wounded.

The group also said, "Seven victims including two children died after government warplanes missiles fired on the Salah Al Din neighborhood in Aleppo on August 17," on their website, in addition to Sunday's attack.

Iran and a group of six world powers known as the P5+1 – China, France, Russia, the United Kingdom and the United States plus Germany – reached an agreement to lift economic sanctions against Iran in return for monitoring its nuclear program on July 14. The deal has also initiated a series of diplomatic talks regarding the possibility of ending the civil war in Syria, which has been continuing for nearly five years. The deal also has prompted the possibility of further cooperation between Russia and Iran, two states which have been backing Assad's regime in Syria.

The support of Moscow and Tehran in keeping Assad in power leads to a diplomatic mass in solving the Syrian crisis with the United States, Gulf states such as Saudi Arabia and Qatar, and Turkey, as they believe that the political crisis and Assad's illegitimate demands of holding on to power are the root causes of regional turmoil and instability.
Last Update: Aug 17, 2015 4:34 pm
RELATED TOPICS