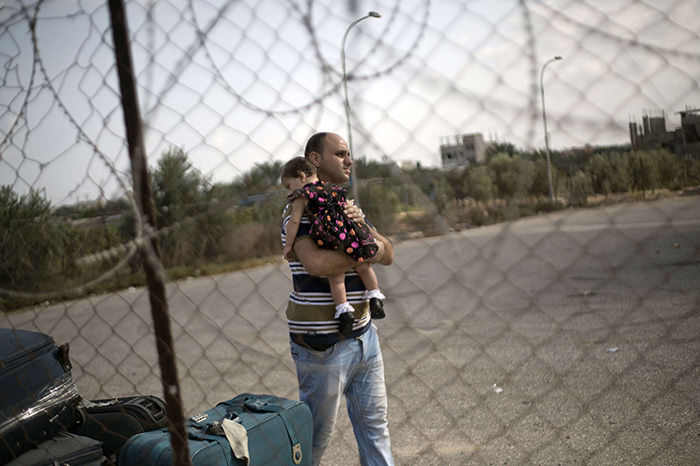 A Palestinian man carries a baby as he waits at the Rafah border crossing in the southern Gaza Strip for permission to enter Egypt on August 17, 2015 (AFP Photo)
by Anadolu Agency
Aug 18, 2015 12:00 am
The Rafah crossing, Gaza's only gateway to the world, has become a symbol of suffering and tragedy for tens of thousands of Palestinians in the Gaza Strip due to its frequent closures by Egypt.

Egyptian authorities rarely open the crossing, and when they do, it is only for humanitarian cases, students, medical patients and people who have residence permits abroad.

The opening of the Rafah crossing reveals the scale of the tragedy suffered by large numbers of Palestinians who have been waiting for months for their turn. Up to 20,000 Palestinians have registered on the lists of Gaza's Ministry of Interior.

Egyptian authorities opened the Rafah crossing on Monday morning in both directions to allow hundreds of the humanitarian cases in the Gaza Strip to travel abroad and ease the return of hundreds of stranded Palestinians inside Egypt.

This opening will close on Thursday and comes after a closure that lasted for fifty days.

Khaled al-Shaer, director of the Palestinian side of Rafah crossing, told Anadolu Agency that "dozens of humanitarian cases have started to leave the Gaza Strip since Monday morning, coinciding with the return of the stranded Palestinians from the Egyptian side."

Among the narrow corridors of the Rafah crossing's halls on the Palestinian side, Samira al-Astal, 50, her husband Kamal, 55, her daughter Noor, 20, and her son Mohammed, 18, found a place amid the huge crowds in order to wait their turn to travel.

Samira and her family were not lucky enough to travel on Monday and have been waiting their turn since early that morning.

Exhausted from standing, she told Anadolu Agency: "The numbers of people who are trying to travel are very large. I went to the officials here, but there are no helping hands being offered."

"My daughter has to travel to Jordan as soon as possible, her wedding will be held there next Wednesday," she said, adding that her daughter has been "registered on the travel list since April."

Samira hopes that the Egyptian, Palestinian and Jordanian authorities can facilitate her travel with her daughter as soon as possible through the Rafah crossing, so she can share her daughter's happiness on the day of her wedding.

Aziza Abdul Latif, 55, sits on the waiting seats at the crossing, fatigued because of the long waiting times.

"I've been married for 21 years in Jordan. I came here to visit my family in the Gaza Strip about three months ago. I only intended to stay here for two weeks but I could not return back to my home because of the closure of Rafah crossing," she told Anadolu Agency.

"I came today to the crossing and there is little hope for me to travel. My family has been waiting for me in Jordan for months and my time in Gaza has exhausted me financially and physically," she said.

Cairo has tightened its grip on the border with the blockaded Gaza Strip since 2013, following the ouster of Egypt's first democratically-elected civilian president Mohamed Morsi in a military coup on July 3, 2013.
Last Update: Aug 18, 2015 5:42 pm