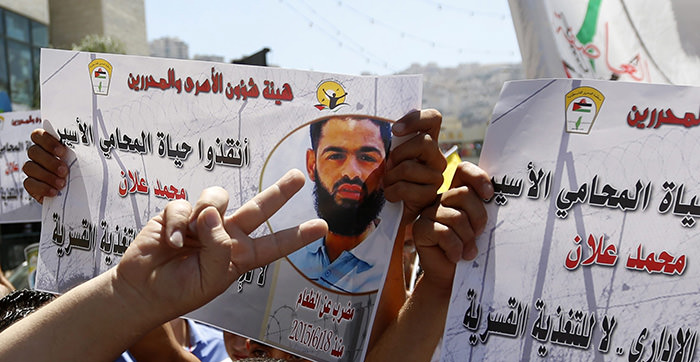 Protesters hold portraits of Palestinian prisoner Mohammad Allan, said to be held in an Israeli jail during a support rally calling for his release in the West Bank city of Nablus (EPA Photo)
by Aug 18, 2015 12:00 am
A Palestinian detainee on a two-month hunger strike emerged from a coma Tuesday but pledged to resume fasting if Israel did not resolve his case within 24 hours, a Palestinian group said.

Mohammed Allan, 31, "declared in front of his doctors that if there is not any solution to his case within 24 hours he will ask for all treatment to stop and will stop drinking water," the Palestinian Prisoners Club said in a statement.

Allan, held by Israel without charge since November, went on hunger strike in protest on June 18, taking only water. He fell into a coma last Thursday night.

Doctors have since been intravenously giving him water, vitamins and salts and he was connected to a respirator.

The prisoners club said that after regaining consciousness Allan "has agreed after detailed explanations about his condition situation to take some supplements for 24 hours while he waits for a resolution to his case".

Lawyer Jamil al-Khatib told AFP after visiting his client in hospital that Allan appeared determined to go all the way, although there was still hope the judiciary would find a solution.

Israel's High Court will on Wednesday continue hearing a petition by Allan's lawyers calling for his release on medical grounds.

At a hearing on Monday, one of the doctors treating Allan said that if he were to resume his hunger strike he was likely to go into a fatal decline.

The justice ministry released a statement ahead of Monday's hearing that included an offer to free Allan, a lawyer from the northern West Bank town of Einabus, "if he agrees to go abroad for a period of four years".

Tensions have soared in the Israeli-occupied West Bank in recent weeks in the wake of the firebombing of a Palestinian home in the village of Duma, attributed to Jewish extremists, which killed an 18-month-old child and his father.

Israeli opposition leader Isaac Herzog who met Palestinian leader Mahmud Abbas warned on Tuesday of the dangers of another intifada, or anti-Israeli uprising, unless the two sides resume a long-frozen peace negotiations.

There are fears of violence escalating if Allan dies from his hunger strike, and there have been clashes between his Israeli Arab and Palestinian supporters and Jewish opponents near the Israeli hospital where he is being held under guard.

On Monday, hundreds of Palestinians in Hebron staged a peaceful rally in the southern West Bank city's centre, waving Palestinian flags and holding Allan's picture while calling for his release.

Allan has been protesting against his internment under what Israel calls administrative detention, which allows people to be held without charge for six-month periods that can be renewed indefinitely.

Many Palestinian prisoners have staged hunger strikes, including those on administrative detention.

Allan's protest has also raised questions over whether Israel would seek to invoke a law passed last month allowing prisoners to be force-fed when their lives are in danger.

Doctors and activists strongly oppose the law, including those who say the practice amounts to torture and robs Palestinians of a legitimate form of protest.

The new law requires the authorities to seek a court order to allow force feeding, which they have not done.
Last Update: Aug 18, 2015 9:42 pm
RELATED TOPICS