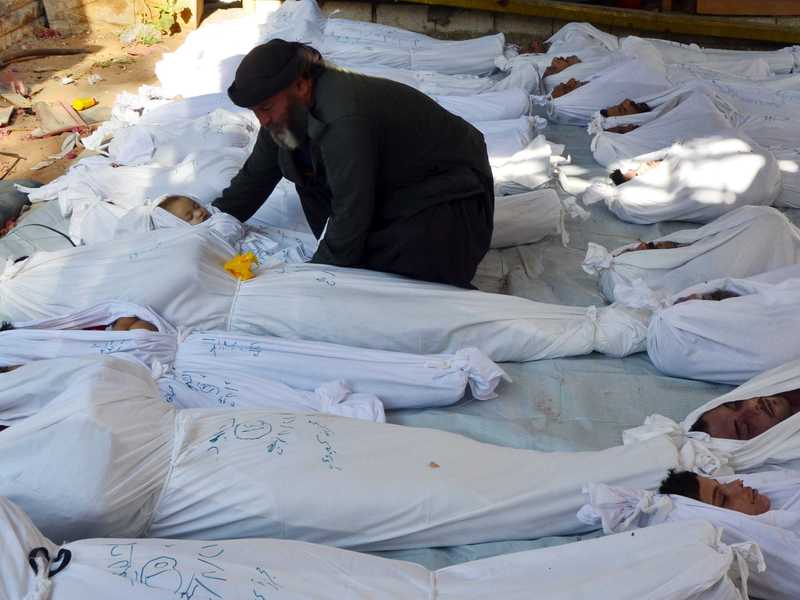 Two years ago, the Assad regime killed as many as 1,400 people with chemical weapons. Several reports indicated that the chemicals were sold to the regime by British and German companies under licenses of their respective governments

On Aug. 21, 2013, the Syrian regime killed at least 1,400 people in rebel-held areas of Damascus, by attacking with chemical weapons. The fired rockets were carrying the nerve agent sarin.

The U.N. described the attacks as the worst chemical weapon use in the 21st century. U.S. President Barack Obama threatened to carry out airstrikes against the Syrian regime eventually resulting in Assad accepting a U.S.-Russia brokered deal to relinquish his chemical arsenal.

The question of how the regime produced chemical weapons received a surprising answer as NATO member Germany was proved to be the main supplier of chemical substances with military potential to the regime between 2002 and 2006.

In March of 2011, Syrians were emboldened enough to raise their voices against the dictatorship. However, the regime's response was not as peaceful as the protests. And the country was subsequently dragged into a deadly civil war after opposition groups took up arms against the government. The opposition groups have also been divided internally. While moderate opposition groups like the Western-backed Free Syrian Army (FSA) were struggling for a democratic Syria where all religious and political groups would be free to exist, radical elements like al-Qaida's Syrian branch Nusra Front or the ISIS aimed to establish a new Syria, ruled by an extremist religious jurisprudence. While the war continued among the groups and the regime forces, and other groups loyal to the regime like Iran-backed Hezbollah, the U.S. established an international coalition against ISIS on last September after an American citizen was beheaded.

The Syrian civil war entered its fifth year five months ago and has caused the deaths of more than 200,000 people with at least 60,000 missing. The war has also displaced nearly 10 million people. About 13.6 million people, equivalent to the population of London, have been displaced by conflicts in Syria and Iraq, many without food or shelter, the U.N. refugee agency revealed. The 13.6 million include 7.2 million displaced within Syria – an increase from a long-held U.N. estimate of 6.5 million – as well as 3.3 million Syrian refugees abroad, 1.9 million displaced in Iraq and 190,000 who have left to seek safety. The vast majority of Syrian refugees have fled to Lebanon, Jordan, Iraq and Turkey. Western countries have been frequently criticized by aid agencies and the U.N. for not opening their borders to Syrian refugees, as the most developed countries have received the least number of refugees.

While the international and regional powers continue endless discussions, the regime does not only use conventional weapons but also chemical weapons. The Hague-based Organization for the Prohibition of Chemical Weapons (OPWC) says it has evidence of the use of chlorine gas in repeated attacks by regime forces in Syria. The OPWC said there had been a "spate of new allegations" of chlorine attacks. The regime agreed to destroy its chemical weapons following global outrage over a sarin gas attack in Ghouta. However, opposition groups claim the regime has not handed over all of its chemical stockpile and still uses chemical weapons against its people. Moreover, the regime is developing a new type of chlorine bomb and in the first months of this year investigators found new traces of chemical nerve agents after several regime attacks. A June Wall Street Journal report said U.S. intelligence officials believed that the regime will use the chemicals "on a large scale as part of a last-ditch effort to protect key Syrian government strongholds." Although the U.S. and other Western countries had attempted to prevent the regime from using chemical weapons last year and even considered military intervention, ISIS has changed the balances in the war. However, the diplomatic efforts to stop the Assad regime failed as the Damascus administration was unconditionally supported by Iran and Russia both economically and militarily.

The regime produces chemical weapons with the use of leftover chemicals that can be either used for civilian of military activities. Pharmaceuticals and medicines can even be turned into chemical weapons. Last year before leaving his post, British Foreign Secretary William Hague admitted that in the 1980s British companies sold these kinds of chemicals to Damascus. In the early 1990s the U.S. blocked the shipping of dual-use chemicals to Iraq, Syria and Iran. Yet, the U.K. and Germany have not prohibited such sales. Even 10 months after the unrest began in Syria, it was revealed that British companies sold chemicals to the regime.

While India, the U.K. and U.S. sold chemicals to Iraq and Syria, the main supplier has been Germany. "Germany exported 111 tons of chemicals to Syria between 2002 and 2006 that could be used in the production of sarin gas," Reuters reported in 2013, basing the claim on a report published by a German newspaper. "The chemicals sodium fluoride, hydrofluoric acid and ammonium hydrogen fluoride are classified as 'dual use' under European Union law, meaning they can be used for either civil or military purposes. They require special export permits," Reuters said. After a lawmaker asked the German government to respond to the claims, the government said the chemicals sold in 2002, 2003, 2005 and 2006 had a total value of $232,300 and were sold for civilian use. "Permits were granted after careful consideration of all possible risks, including of the goods' misuse or transfer into chemical weapons use. In all cases their planned civil use was considered to be plausible," the statement said. "The German government has no information to suggest that the delivered goods were later used for purposes other than the originally declared civilian purpose," it added. German Chancellor Angela Merkel told ARD television: "We are of course looking into all allegations on this, but from what we can see so far the export license was for civil use." Der Spiegel reported in January 2013: "Chancellor Angela Merkel's government has been in possession of a list containing the names of German companies thought to have helped Syrian dictator, [President] Bashar Assad and his father Hafis build up Syria's chemical weapons arsenal over the course of several decades. … Berlin immediately classified the list and has since kept it under lock and key." The paper also claimed that the German government protected the companies: "Documents suggest that successive German governments protected companies that, knowingly or unknowingly, colluded with mass murderers."

It is not known whether the companies continue to sell chemicals to Assad or any other regime that has the potential to turn them into weapons. Yet, the regime has killed thousands and may carry out chemical attacks again. Since the disarmament operation began after Syria acceded to the Chemical Weapons Convention in 2013, 92.03 percent of chemicals have been removed, according to the OPCW report on Syria. Norwegian and Danish ships traveling to Italy shipped Syrian chemicals out of the country in June 2014. The remaining 8 percent is packed and stored at a single site.