Lebanese PM says he might resign amid protests, political dysfunction 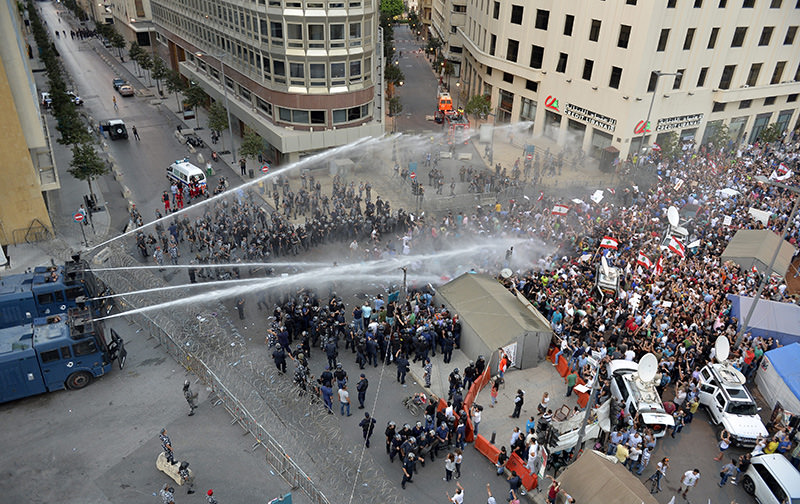 Lebanese police use water cannons to disperse activists trying to remove barbed wire blocking the entrance to the Lebanese Government Palace during a protest against the ongoing garbage crisis, downtown Beirut (EPA Photo)
by Associated Press Aug 23, 2015 12:00 am
Lebanon's prime minister hinted Sunday he might resign after violent protests against government corruption and political dysfunction triggered by a monthlong trash crisis in Beirut. Tammam Salam also pledged that security forces that used violence against demonstrators would be held accountable.

Salam said in a news conference at the government's headquarters that the right to demonstrate is protected by the constitution. Salam told the protesters he is ready to have a dialogue with them, while about 100 protesters outside the building chanted "leave, leave."

"Anyone who behaved in a way that harmed or caused damage to those people will be held responsible," Salam said.

His comments came a day after police firing tear gas, rubber bullets and water cannons battled thousands of protesters in downtown Beirut. Gunfire echoed through the streets into the night.

Lebanese Red Cross spokesman George Kattaneh told The Associated Press that 55 protesters and policemen were wounded during the protests Saturday and taken to hospitals. Another 70 people were treated on the spot by paramedics.

Salam said if next Thursday's Cabinet meeting is not productive, "then there is no need for the council of ministers."

Lebanon has a sectarian power-sharing system that ensures equal representation between the country's main religious sects. The arrangement often leads to complete paralysis.

Saturday saw the biggest demonstrations by far since garbage began piling up on the streets after the capital's main landfill was closed a month ago. Bickering politicians have been unable to agree on an alternative system for waste management.

Residents in this proud Mediterranean city have resorted to burning trash on the streets and dumping garbage into valleys, rivers and near the sea, leading to warnings of a health catastrophe.

An online group calling itself "You Stink!" and other civil society groups organized the rallies, urging others to join them in a revolt against a corrupt system. They said they plan to stay in downtown Beirut near the government building and parliament.

The activists were expected to give an official response to Salam's statements later on Sunday.

Despite Salam's hint about resignation, it is highly unlikely to happen as the move could create a total political vacuum and eventually plunge Lebanon into chaos.

Lebanon has been without a president since May 2014. Parliament has been paralyzed and unable to meet to elect a president because of lack of quorum.
Last Update: Aug 24, 2015 12:27 am
RELATED TOPICS