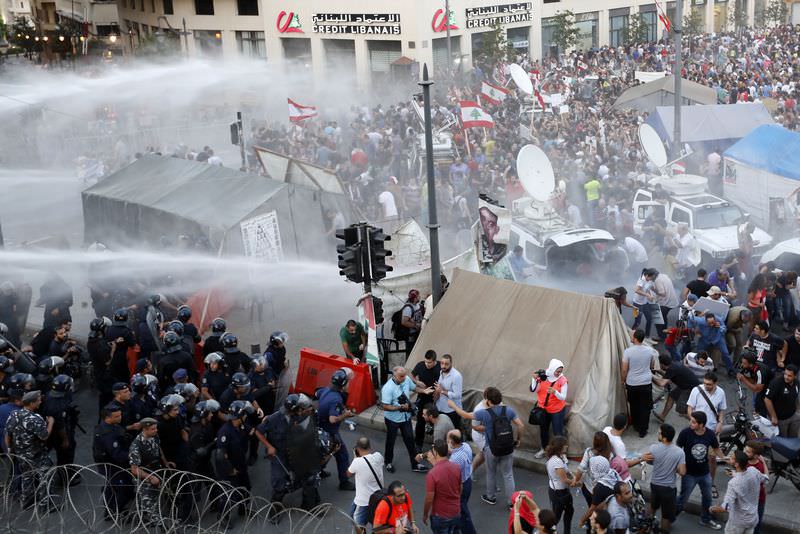 Lebanese police use water cannons to disperse ,You Stink, protesters campaigning against the trash crisis in Beirut on August 22, 2015. (AFP Photo)
by Aug 23, 2015 12:00 am
At least 16 people were injured on Saturday when clashes erupted in central Beirut between Lebanese security forces and demonstrators calling for a solution to weeks of uncollected rubbish.

Thousands of protesters rallied to protest against the government's inability to clean up the capital and other parts of Lebanon where the streets are overflowing with rubbish.

Organised by the "You Stink" campaign, the demonstrators gathered in Riad al-Solh Square near the parliament building and chanted slogans against the government and political leaders.

Some protesters threw water bottles and firecrackers at security forces who had set up barricades and barbed wire to prevent people from approaching parliament, an AFP photographer said.

Demonstrators tried to pull down the barricades in an attempt to storm parliament and security forces retaliated with tear gas and water cannons.

Some protesters were also beaten with batons.

"There are now at least 16 people who are wounded in total," a Red Cross official told AFP, speaking on condition of anonymity.
He could not specify how many were in critical condition or what types of injuries they had sustained.

Earlier, Red Cross spokesman Iyad Munzer said at least one person was in a critical condition, and that ambulances were responding to reports of more injured.

In an online statement, Lebanon's Internal Security Forces (ISF) said "more than 35 ISF members and a number of protesters were wounded during the dispersal of the protest".

Shots were heard in the city centre, but it was not immediately clear if this was live fire, blanks, or rubber bullets.

Most of the protesters left when the demonstrations turned violent, the AFP photographer said, but hundreds regrouped in central Beirut and continued chanting.

Protest leader and activist Assaad Thebian, speaking to Lebanon's LBC news network, called on protesters to remain in Beirut's central Martyrs Square until five demonstrators who had been arrested were released. 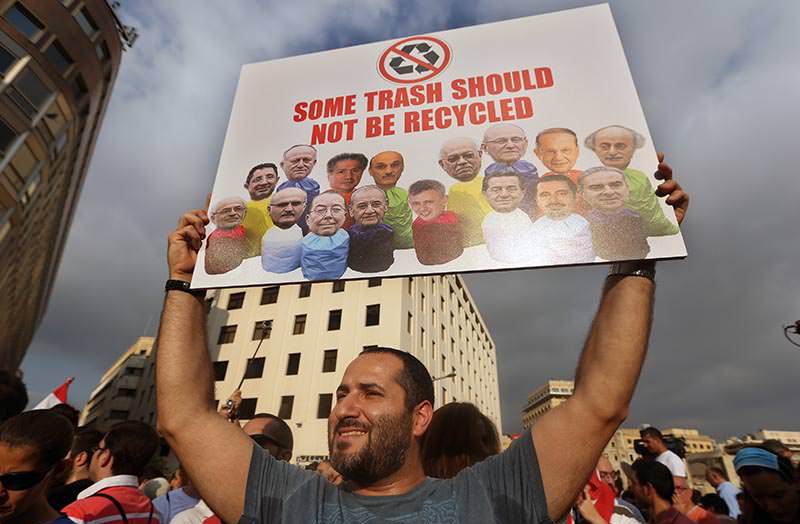 Lebanese police use water cannons to disperse "You Stink" protesters campaigning against the trash crisis in Beirut on August 22, 2015. (AFP Photo)

The ISF said in a later statement that it had released all those detained during the protests following a request by Interior Minister Nuhad Mashnuq. It did not specify how many had been held.

In comments to the Al-Jadeed television network, the interior minister said he had ordered security forces to hold their fire and pledged that those who had fired on protesters "would be held accountable".

The "You Stink" campaign has staged several protests calling for a comprehensive solution to the waste problem which erupted after Lebanon's largest landfill closed on July 17.

Since then, some municipalities have collected rubbish but then disposed of it at illegal dump sites.