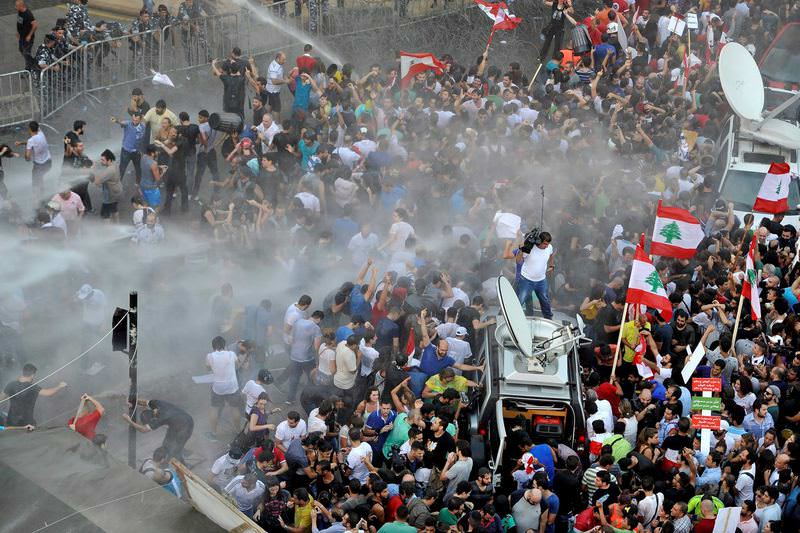 Police firing tear gas, rubber bullets and water cannons battled thousands of Lebanese protesters Saturday demonstrating against government corruption and political dysfunction amid a trash crisis, with the sound of gunfire echoing through the streets into the night. Lebanon's prime minister hinted Sunday he might resign after violent protests against government corruption and political dysfunction. Tammam Salam also pledged that security forces that used violence against demonstrators would be held accountable. Salam said in a news conference at the government's headquarters that the right to demonstrate is protected by the constitution. Salam told the protesters he is ready to have a dialogue with them, while about 100 protesters outside the building chanted "leave, leave." "Anyone who behaved in a way that harmed or caused damage to those people will be held responsible," Salam said. The interior ministry said it had ordered the release of protesters detained during the clashes, which saw youths hurling rocks at police during the attempt to storm a heavily protected security zone around the Saraya palace, the seat of government.

"The people want the overthrow of the regime," said protesters using the famous chants made by Arab protesters during the height of popular protests that swept the region after 2011 and toppled several longstanding rulers. Riot police used batons to beat back protesters among downtown Beirut's Ottoman-era buildings and lavish apartment complexes, while others were carried away, overcome by tear gas. Private television station LBC reported police attacked one of its crew. "The people want to topple the regime!" protesters cried out, a slogan used during the Arab Spring protests that swept through the region.

Lebanese Red Cross spokesman George Kattaneh told The Associated Press that at least 15 protesters were wounded, one of them in critical condition. He said the numbers likely would rise as security forces battled with protesters into the night. Police said 35 officers were wounded as they tried to disperse protesters trying to break into a security zone near parliament and the government building.

Saturday saw the biggest demonstrations by far since garbage began piling up on the streets after the capital's main landfill was closed a month ago. An online group calling itself "You Stink!" and other civil society groups organized the rallies, calling on Lebanese to join them in a revolt against the corrupt system. They said they plan to stay in downtown Beirut near the government building and parliament.

"We want to live in our country," read one poster carried by a protester. Another read: "Some trash should NOT be recycled," written in red above photos of Lebanese politicians. The government has been unable to find an alternative system for waste management, amid government paralysis and bickering among politicians. Some residents have resorted to burning trash on the streets, sending toxic fumes over the city's skyline and into homes. The health minister has warned of a catastrophe as some have started dumping trash in valleys, rivers and near the sea.

The protest began in Riyad Solh Square near the government building. Police fired tear gas and water cannons to beat back protesters after some of them tried to push through a security cordon. The protesters later moved to the nearby Martyrs' Square and pledged to stay the night.

Heavy gunfire could be heard as the clashes continued. Interior Minister Mohammad Machnouk, currently abroad, told the private Al-Jadeed television station that those who opened fire with live ammunition would be held accountable. He also pledged to resolve the trash crisis at next week's Cabinet meeting.

Lebanon has a sectarian power-sharing system that ensures equal representation between the country's main religious sects. That often means complete paralysis. Protesters called for the resignation of the government, blaming it for worsening the country's political paralysis. But government has been particularly poor since the eruption of the war in neighboring Syria. That conflict has exacerbated Lebanon's political divisions, often along sectarian lines that reflect the Syrian conflict. The presidency has been vacant for more than a year, and the parliament elected in 2009 has extended its own term and postponed elections until 2017 on the grounds of instability.

It was not clear whether the snowballing protest movement would turn into something bigger. Lebanese have rarely taken to the streets unless it was for a political cause backed by a political party. Those behind recent protests have urged more people to join them. The tiny, fragile country with a strong sectarian divide has managed to survive the Arab Spring uprisings that toppled Arab dictators, the onslaught by the Islamic State of Iraq and al-Sham in Syria and Iraq and the fallout from 1.2 million Syrian refugees now straining its economy. But political disputes have kept the country without a president for more than a year.

Meanwhile, heavy clashes broke out in the Palestinian refugee camp of Ein el-Hilweh near the port city of Sidon, which started when Islamists tried to assassinate a commander of the mainstream Fatah movement. Lebanese security officials said the clashes killed three people and wounded 20. The violence spread through large parts of the camp with exchanges of rocket and heavy machine gun fire. The officials, who spoke on condition of anonymity as they weren't authorized to brief journalists, said the clashes were some of the heaviest in a year. The camp is home to some 70,000 Palestinian refugees, as well as houses Islamists and criminal fugitives.
RELATED TOPICS