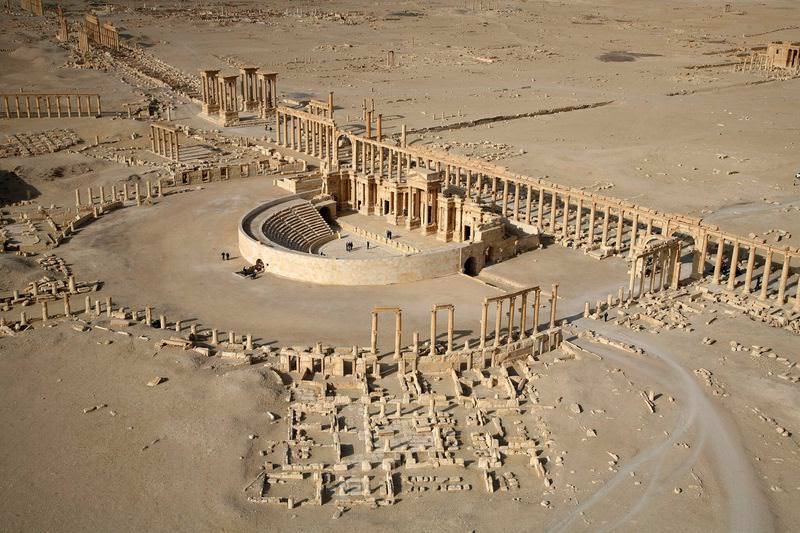 ISIS which has destroyed hundreds of historical buildings since seizing power in large swathes of Iraq and Syria, has demolished an ancient temple in Syria's Palmyra, which is one of the world's most unique archaeological sites

ISIS has blown a temple in Syria's ancient ruins of Palmyra, activists reported. It was the worst fears archaeologists had for the 2,000-year-old Roman-era city after the extremists seized it and beheaded a local scholar.

Palmyra, one of the Middle East's most spectacular archaeological sites and a UNESCO World Heritage Site, sits near the modern Syrian city of the same name. Activists said the militants used explosives to blow up the Baalshamin Temple on its grounds. The blast was so powerful it also damaged some of the Roman columns around it.

The U.K.-based Syrian Observatory for Human Rights said Sunday night that the temple was blown up a month ago. Turkey-based activist Osama al-Khatib, who is originally from Palmyra, said the temple was blown up on Sunday. Both said the extremists used a large amount of explosives to destroy it. Both activists relied on information from those still in Palmyra and the discrepancy in their accounts could not be immediately reconciled, though such contradictory information is common in Syria's long civil war. The fate of the nearby Temple of Bel, dedicated to the Semitic god Bel, was not immediately known. While ISIS sympathizers confirmed on Twitter that the ancient temple has been destroyed, they have not mentioned the other temples or ruins.

Khatib said the Baalshamin Temple is about 500 meters from Palmyra's famous amphitheater where the group killed more than 20 Syrian soldiers after the militants captured the historic town in May. The temple dates to the first century B.C. and is dedicated to the Phoenician god of storms and fertilizing rains. The head of UNESCO, Irina Bokova, said Friday that ISIS militants in Syria and Iraq are engaged in the "most brutal, systematic" destruction of ancient sites since World War II, a stark warning that came hours after militants demolished the St. Elian Monastery, which housed a fifth century tomb and served as a major pilgrimage site. The monastery was in the town of Qaryatain in central Syria. News of the temples destruction comes after relatives and witnesses said Wednesday that Khaled al-Asaad, an 81-year-old antiquities scholar who devoted his life to studying Palmyra, was beheaded by ISIS militants, his bloodied body hung on a pole. He even had named his daughter after Zenobia, the queen that ruled from the city 1,700 years ago.

The temple bombing would be the first time the militants, who control swathes of Syria and Iraq, damaged monumental Roman-era ruins. "We have said repeatedly the next phase would be one of terrorizing people and when they have time they will begin destroying temples," Abdul Karim told Reuters. "I am seeing Palmyra being destroyed in front of my eyes," he added. "God help us in the days to come."

Since ISIS has seized large swathes of Iraq and Syria, the countries' historical heritage has been under threat. The group has destroyed hundreds of mosques, shrines and sufi lodges as well as temples from ancient religions and churches. The world's only recourse is to try to prevent the sale of looted artifacts, thus cutting off a lucrative stream of income for the militants, UNESCO Chief Irina Bokova told the Associated Press. Recent attacks have stoked fears that ISIS is accelerating its campaign to demolish and loot heritage sites.
RELATED TOPICS