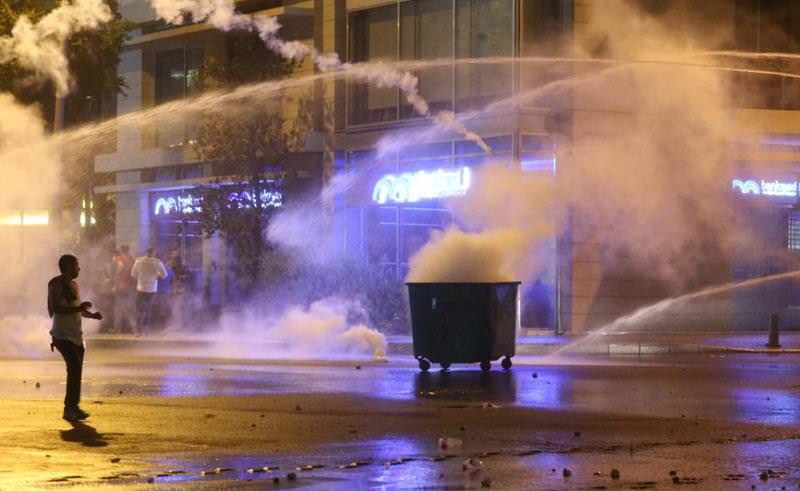 Protesters vowed to continue the anti-government demonstrations although police applied harsh measures to disperse them.
by Daily Sabah Aug 26, 2015 12:00 am

Despite the government's efforts to calm the angry masses in Lebanon, which had remained stable during the Arab Spring, mass crowds still occupy streets and protests have turned violent

Lebanon's cabinet held an emergency meeting over mass protests that started over a trash crisis and turned violent last week. Protests started over the closure of Beirut's main landfill site last month, and have spread to other sides of the country. Demonstrators had promised to continue protests this week, but over a second night of violence in which some shops were vandalized, they suspended rallies, accusing "infiltrators" supported by politicians of disrupting the protests and sparking clashes with police.

Many protesters accuse Prime Minister Tammam Salam and Interior Minister Nihad al-Machnouk of being responsible for "suppressing" the protests over injuries. Thousands of demonstrators took part in the protests, including a number of Lebanese artists and media personalities.

Protesters are urging the Lebanese government to resign over the trash crisis. The capital's ongoing sanitation crisis recently entered its second month in the absence of any concrete solutions on the part of government officials.

On Monday, gunfire was heard in the capital's commercial district as police fired in the air to disperse those who remained. A few protesters later set tire fires in Martyrs' Square, with some even pulling down trees, breaking windows and traffic lights.

On Sunday, the Lebanese Red Cross said that 402 people were treated over the use of tear gas in Sunday's protest, which saw more violence than the previous day. Most were treated for symptoms from tear gas. Furthermore, a protester, Rida Taleb, was killed during anti-corruption demonstrations in Beirut, after mass demonstrations began in the Lebanese capital on Saturday. Red Cross Lebanon said that 49 protesters and police officers were injured in Sunday's protests in the Lebanese capital. Some of those injured had suffered smoke inhalation, and at least 40 were hospitalized, Lebanese Red Cross said. According to local sources over 20,000 people joined the protests. Protesters chanted slogans against the politicians, while some of them threw water bottles and firecrackers.

Also on Saturday, at least 16 were injured during clashes with police, according to a Red Cross official, while the Internal Security Forces said more than 35 of its members were also hurt. Fed up with the situation, some residents burnt rubbish on the streets while hundreds joined a demonstration on Saturday calling on the government to resign over its failure to take action. According to local sources, rubbish collection has now resumed in only some parts of Beirut.

Joseph Moussalem, spokesman for the Lebanese Security Forces, said that 35 Lebanese policemen had been injured, one of them critically, by rocks and firecrackers hurled by protesters. Lebanon's army commander General Jean Kahwaji said that the armed forces protect any peaceful demonstrations but do not tolerate "security violators or infiltrators" who seek to sow "sedition and chaos." Also the U.N. special coordinator for Lebanon urged "maximum restraint" by all sides. David Hale, U.S. Ambassador to Lebanon, said he was "deeply troubled" by the reports of injuries and called for a thorough investigation and restraint on all sides.

A Beirut-based group calling itself "You Stink!" and other civil society groups organized the rallies, calling on the Lebanese to join them in a revolt against the corrupt system. "You Stink" leader Hassan Shams accuses "infiltrators" for the violence over the weekend. "We started peacefully, and we will continue peacefully," he said. "You Stink" members blame politics for the failure to resolve the crisis. Also Environment Minister Mohammad Machnouk announced the names of companies that won the bidding to manage Beirut's trash, and promises the process will be "transparent."

In addition, three Gulf countries Bahrain, Kuwait and Saudi Arabia have issued warnings over travel to Lebanon after anti-government demonstrations in Beirut turned violent over the weekend. Protests began over the country's uncollected rubbish escalated into mass protests over perceived government corruption, power and water shortages. Bahrain called on its nationals to leave Lebanon immediately and to avoid traveling there for their safety on Monday. The Kuwaiti embassy called on its citizens to remain vigilant for their safety at all times. "Under the current critical circumstances, the Kuwaiti nationals in Lebanon are advised to cancel any unnecessary plans and leave," the Kuwaiti embassy said in a statement. Saudi Arabia's foreign ministry urged all Saudi citizens in Lebanon to exercise caution and to check in with the embassy.

The cabinet and parliament are deadlocked and politicians have been unable to agree on a new president for more than a year. The Lebanese parliament has twice extended its term without elections, although it isn't working because some lawmakers insist on electing a president first. The presidency has been vacant for more than a year, and the parliament elected in 2009 has extended its own term and postponed elections until 2017 on the grounds of instability.

The government has been particularly poor since the eruption of the war in neighboring Syria. The conflict has exacerbated Lebanon's political divisions, often along sectarian lines that reflect the Syrian conflict.
RELATED TOPICS