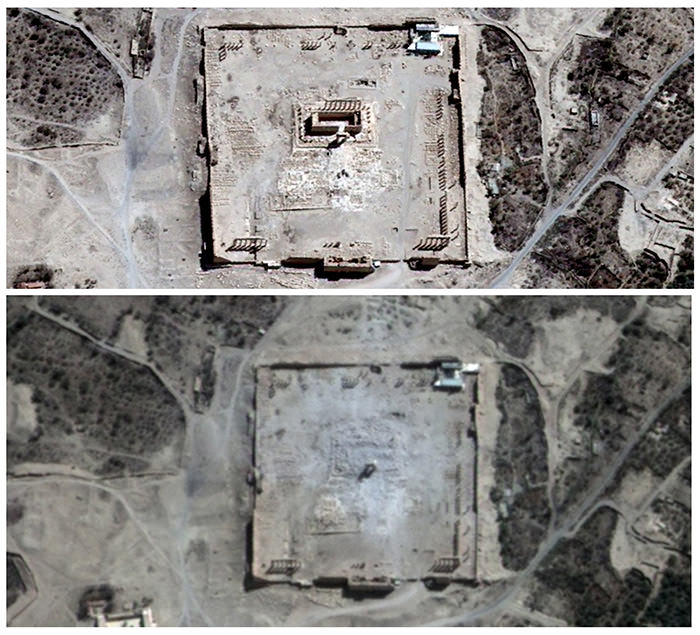 |Reuters Photo
by Daily Sabah Sep 01, 2015 12:00 am
Satellite images show the main temple in Syria's Palmyra has been flattened, confirming the worst fears for the ancient ruins held by the ISIS terrorist group.

The destruction of the Temple of Bel sparked outrage and international headlines, precisely the reaction the group may have been seeking, experts said.

Dozens of relics remain at risk in the ruins of Palmyra, which ISIS terrorists seized from regime forces in May as they pursued their campaign for territory in Syria and Iraq.

Satellite images taken before and after an explosion at Palmyra on Sunday "confirm the destruction of the main Temple of Bel as well as a row of columns in its immediate vicinity," UN training and research agency UNITAR said late Monday.

The 2,000-year-old temple was the centerpiece of Palmyra's famed ruins and one of the most important relics at the UNESCO-listed heritage site.

ISIS fighters seized Palmyra from Syrian regime forces on May 21, immediately sparking fears for the city's ruins and historic sites.

While antiquities staff evacuated most of the city's museum before ISIS arrived, the group destroyed an ornate lion statue outside the building and also mined Palmyra's ruins.

On Sunday, activists and a monitor reported a large explosion at the site had destroyed the Temple of Bel.

Abdulkarim said Palmyra's remaining ruins, which lie in the southwest of the city, include "dozens of the greatest grave markers, the amphitheatre, and the Temple of Nabu, which only has its foundations."

The city's grand Roman amphitheatre, which dates from between the second and third century, is not believed to have been damaged. 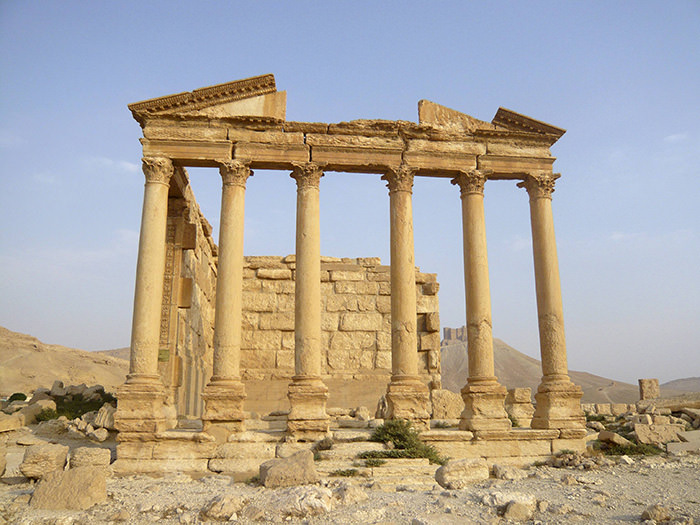 But it was the scene of a gruesome massacre shortly after ISIS seized Palmyra, with child members of the group executing 25 Syrian soldiers in the amphitheater.

"They have killed Palmyra. Now, they will terrorise it," Abdulkarim said. "It's the last warning before the complete destruction of Palmyra."

Cheikhmous Ali of the Association for the Protection of Syrian Archeology (APSA) described the razing of the ruins as "a way to pressure and torture the local population -- to suppress their history and their collective memory."

It was also an attempt to "remain in the headlines", he said, warning: "The more we give ISIS's savage actions media attention, the more they will repeat this."

Gruesome violence and the destruction of priceless artefacts have become hallmarks of ISIS as it expands its so-called "caliphate" across swathes of territory in Iraq and Syria.

The militants have used sophisticated media techniques to gain publicity and lure thousands of foreign fighters to join their ranks.
"The videos ISIS publishes of people being burned alive don't grab headlines anywhere near as much as headlines about Palmyra do," Winter said.

ISIS "has recognized the symbolic power of destroying these ruins.

"If there's anything ISIS revels in, it's condemnation" of its actions, he said.

Regime forces have launched an offensive to retake the ancient city and as they edge closer the group may be looking to sow as much destruction as it can.