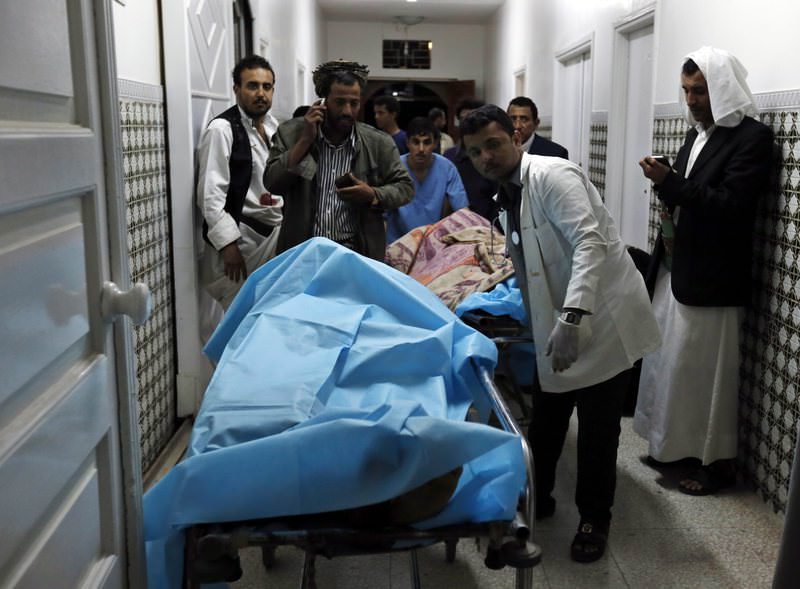 Yemenis gather around the bodies of the victims of ISIS' triple suicide attack targeting a mosque, lying on guerneys at a hospital in Sanau2019a, Yemen, 02 September 2015. (EPA Photo)
by Associated Press Sep 02, 2015 12:00 am

Medical officials say at least 20 people have been killed and at least 50 were wounded by ISIS' triple bomb attack that blew up at a mosque in the Yemeni capital, Sanaa.

Police officials say a suicide bomber blew himself up Wednesday inside the mosque during the evening call to prayers, while a car bomb exploded outside the mosque's door. Medical officials say the death toll may rise with people now in operating rooms in several hospitals.

Witnesses say the car bomb exploded while people were carrying out the wounded from inside the mosque.

Hamid Ali, a witness at the scene, says the explosion left body parts and bloodied floors in the mosque frequented by both Sunni and Shiite Muslims.

This is a breaking news update. The AP's earlier story follows below.

Gunmen shot dead two Yemenis working for the International Committee of the Red Cross on Wednesday as they were traveling from the northern Saada province to the capital, Sanaa, the group said.

Rima Kamal, an ICRC spokeswoman in Sanaa, says the two were killed in Amran province.

Yemen has been mired in violence since Shiite rebels, known as Houthis, swept down from their stronghold in Saada and captured Sanaa last September. Both Amran and Saada are fully controlled by the Houthis.

The Houthis are fighting alongside army units loyal to former President Ali Abdullah Saleh against forces loyal to exiled President Abed Rabbo Mansour Hadi as well as southern separatists and local militias. A Saudi-led and U.S.-backed coalition has been launching airstrikes against the rebels since March.

The conflict has killed over 2,100 civilians, according to the United Nations.

Saudi Arabia's civil defense said Tuesday that seven people were wounded when a missile fired from inside Yemen struck three vehicles in al-Tuwal village in the Jizan border province.

In Sanaa, a suicide bomber blew himself up Wednesday inside a mosque during the evening call to prayers, while a second bomb exploded outside the mosque's door, the Houthi's media office said.

20 people were killed and dozens others injured in the explosion, medical officials said. The death toll may rise further with more people now in operating rooms in several hospitals, they said.

Hamid Ali, a witness at the scene, said the explosion left body parts and bloodied floors in the mosque frequented by both Sunni and Shiite Muslims. Witnesses near the area saw ambulances carry away the wounded. Witnesses say the car bomb exploded while people were carrying out the injured from inside the mosque, raising the death toll.

Pro-government forces, who control the Marib province capital, are preparing for a large attack in the next two days, along with support from the Saudi-led coalition, anti-Houthi officials said. If they successfully clear the province of Houthi forces, the pro-government forces could then proceed to Jawf province, and then to Saada, the Houthis' stronghold in the north.

The officials spoke on condition of anonymity because they weren't authorized to brief reporters.

In a Wednesday report, Human Rights Watch says both sides committed serious abuses against civilians and fighters in their custody during fighting there, with southern militants killing at least seven Houthi prisoners since March.

"Southern forces that have regained control of Aden should end abuses against prisoners and do all they can to establish law and order in the city," said Sarah Leah Whitson, Middle East director for the U.S.-based rights group. "The Houthis need to release anyone wrongfully detained and account for everyone they are holding."
Last Update: Sep 02, 2015 9:21 pm
RELATED TOPICS