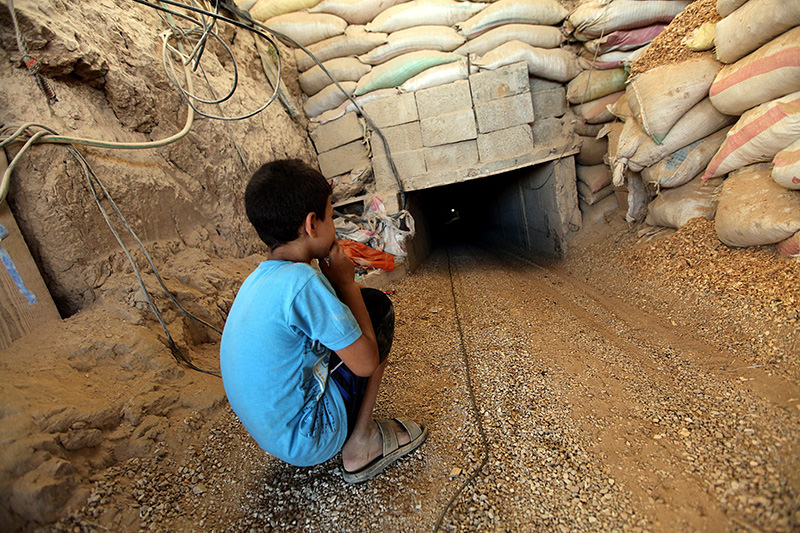 9-year-old Mohammed sits in front of a tunnel used between Gaza Strip and Egypt at Rafah border in the southern Gaza Strip, 26 August 2012. (EPA photo)
by Anadolu Agency Sep 02, 2015 12:00 am
Egypt's military will flood the area along the border with Gaza with water, in a new bid to destroy underground tunnels between Sinai and the Palestinian territory, a Palestinian security source told Anadolu Agency.

"The Egyptian army has begun to build huge pipelines along the border with the Gaza Strip," the source said.

He said the project "aims to destroy underground tunnels by filling the area with water."

There was no comment from Egyptian authorities on the report.

Blockaded by Israel since 2007, Gaza used to receive much-needed supplies through the network of smuggling tunnels on its border with Egypt's Sinai Peninsula.

Since the 2013 military coup against President Mohamed Morsi, Egyptian authorities have cracked down on the smuggling tunnels along the border with Gaza.

Egypt claims the tunnels are used in militant activities inside Sinai.

Last year, Egyptian authorities began to establish a buffer zone in North Sinai's city of Rafah along the border with Gaza following a spate of militant attacks against army and security forces.