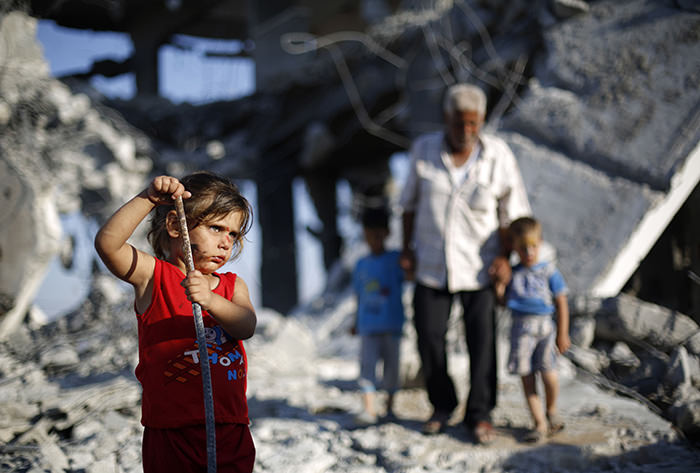 A Palestinian girl plays in the rubble of buildings destroyed during the Israeli airstrikes on Gaza in the summer of 2014 (AFP Photo)
by Cihangir Yıldırım Sep 02, 2015 12:00 am
A new report released by the United Nations Conference on Trade and Development (UNCTAD) on Tuesday indicates that Gaza could be "uninhabitable" by 2020 if current economic trends continue. According to the UN report, the war "has effectively eliminated what was left of the middle class, leaving almost all of the population destitute and dependent on international humanitarian aid." Gaza's GDP dropped 15 percent last year, and unemployment reached a record high of 44 percent. Some 72 percent of households are food insecure. "The wars have shattered Gaza's ability to export and produce for the domestic market and left no time for reconstruction," the UN report says. Because of the unstable political situation, reduced aid and the slow pace of reconstruction, the report calls the Palestinian territories "bleak."

The UN report highlights the severe crises in Gaza related to water and electricity, as well as the destruction of vital infrastructure during military operations in July and August 2014. The UNCTAD report finds that Gaza's 1.8 million inhabitants rely on coastal aquifers as their main source of freshwater, yet 95 percent of this water is not safe to drink. The UN estimates that in 2014, unemployment in Gaza reached 44 percent, the highest level on record. UNCTAD describes the economic wellbeing of Palestinians living in Gaza as being worse today than two decades ago.

Gaza has been under blockade by Israel and Egypt (except for the Mohammed Morsi era) since 2007. During the attacks on Gaza in 2014, more than 2,200 Palestinians, including hundreds of civilians, were killed and over 11,000 Palestinians were injured. More than 500,000 Palestinians were displaced in the conflict, the UN said. Moreover, at least 100,000 Gazans became homeless. The Gazan Health Ministry said that 2,310 Palestinians were killed, 70 percent of them civilians. According to the UN High Commissioner for Refugees (UNHCR), 65 percent of casualties were civilians. But the Israeli Ministry of Foreign Affairs claimed that 36 percent of the killings were of civilians. Also an independent UN commission of inquiry released a report last June that found evidence that Israel committed war crimes during the attacks on the Gaza Strip in 2014. The report accuses Israel of potentially breaching international law in multiple areas in the conduct of its war, including the precision targeting of residential homes, excessive use of artillery in civilian areas and the loosening of the rules of engagement.

After the war, restoring the city has not been successful, as aid promises made by international communities were not granted, resulting in an even bigger humanitarian crisis. Due to the blockade, the city has been left with no electricity, water, medicine, food and fuel. Children are in need of clothes, diapers and baby food, while families are in need of shelter, blankets, a heater and cleaning supplies.

The sea blockade by Israeli naval forces has caused damage to the Gazan fishing industry. Palestinian fishing was originally to be permitted up to 20 nautical miles offshore under the Gaza-Jericho Agreement in 1994. The agreement was not implemented, and Israel allows fishermen to travel only 3 nautical miles offshore. The UN Office for the Coordination of Humanitarian Affairs (UNOCHA) has estimated that Gazan fishermen need to journey at least 12–15 nautical miles from shore to catch larger shoals.

Israel continues its blockade of Gaza, stopping aid flotillas sailing from other countries. Last July, a Freedom Flotilla III vessel was stopped by Israel and prevented from breaking the blockade imposed on Gaza. The first Gaza Freedom Flotilla expedition in May 2010 ended in tragedy after Israeli commandos killed 10 Turkish nationals, including 19-year-old Furkan Doğan, an American of Turkish origin, in a bloody raid on the Mavi Marmara. The second Gaza Freedom Flotilla took place in 2012. It was forced to turn back.

Also, Egypt has started to build fish farms along the Gaza border in order to shut down the remaining tunnels. The Egyptian military is continuing its crackdown on the underground tunnels that connect the Sinai and Gaza and has launched a new project. According to Egyptian officials, the new project will effectively fill the border area with water and help to end smuggling from Egyptian territory to Gaza. Bulldozers have been digging along Egypt's border with Gaza in recent days, as part of a project billed as an Egyptian military-operated fish farm.

These tunnels are a lifeline for more than 2 million Gazans to get basic needs from Egypt. The tunnels are mainly located at Rafah on the border of the Gaza Strip and Egypt and used for various purposes. They have been used to transport people (in and out) and commercial materials like medicine, food and clothes and vehicle parts into Gaza. Ahead of the Islamic festival Eid el-Adha they were used to transport live cattle. The World Bank estimated in 2015 that the GDP losses caused by the blockade since 2007 was above 50 percent. Gaza's exports virtually disappeared since the imposition of the 2007 blockade. Now, Egypt is trying to finish off the tunnels for good.
Last Update: Sep 02, 2015 4:03 pm
RELATED TOPICS