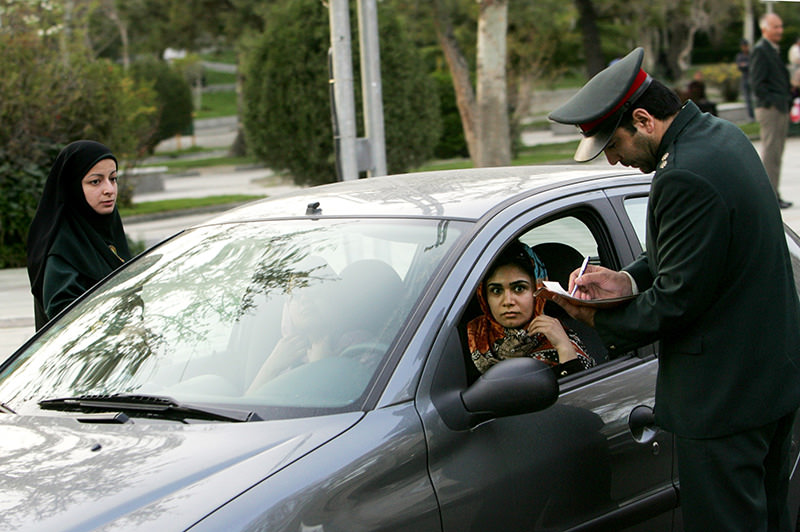 A file picture taken on April 22, 2007 shows Iranian police officers stopping a car during a crackdown to enforce the dress code in the north of Tehran (AFP photo).
by French Press Agency - AFP
Sep 02, 2015 12:00 am
Women drivers in Iran's capital could have their cars impounded by police if they are caught driving with a poorly fixed veil or without their heads covered, a police chief said Wednesday.

"If a (female) driver in a car is poorly veiled or has taken her veil off, the vehicle will be seized in accordance with the law," the head of Tehran's traffic police, General Teymour Hosseini, was quoted as saying by the official ISNA news agency.

He added that any woman who had her car seized would need to obtain a court order before getting it back.

Since the Revolution in 1979, wearing a veil in public has been mandatory for all women in Iran.

But recent decades have seen a loosening of the rules governing female dress and many women in Tehran dress in a way that is far removed from the strict clothing regulations in other countries such as Saudi Arabia.

"Unfortunately, some streets of the capital have come to resemble fashion salons," Iran's judiciary chief Ayatollah Sadegh Larijani said this week, questioning the "tolerance" that has led to "such a situation".

Iran's President Hassan Rouhani has since his June 2013 election overseen some political and social reform but much of the country's political establishment remains deeply conservative.