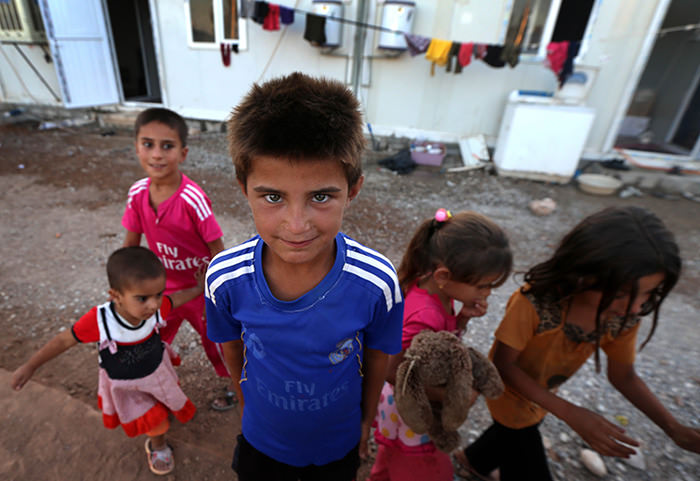 A young Iraqi boy who fled the violence in the northern city of Tal Afar poses for a photo (AFP Photo)
by Daily Sabah Sep 03, 2015 12:00 am
UNICEF has said that conflicts in the Middle East deprive more than 13 million children of an education. UNICEF's report titled "Education under Fire" said: "The killing, abduction and arbitrary arrest of students, teachers and education personnel have become commonplace" in the region. According to UNICEF, children also become combatants at a young age. About 13.7 million who are out of education represent about 40 percent of school-age children in Syria, Iraq, Yemen, Libya and Sudan, and the U.N. fears this figure could top 50 percent in the coming months. "With more than 13 million children already driven from classrooms by conflict, it is no exaggeration to say that the education prospects of a generation of children are in the balance," UNICEF said.

"The destructive impact of conflict is being felt by children right across the region. It's not just the physical damage being done to schools, but the despair felt by a generation of schoolchildren who see their hopes and futures shattered." Peter Salama, regional director for UNICEF in the Middle East and North Africa, said.

UNICEF said that more than 8,850 schools can no longer be used due to violence in the region. Last year, UNICEF documented 214 attacks on schools in Syria, Iraq, Libya, Palestine, Sudan, and Yemen. "The killing, abduction and arbitrary arrest of students, teachers and education personnel have become commonplace," the UNICEF report said.

In Syria, one in four schools have been closed since the conflict erupted, causing more than 2 million children to drop out and putting close to 500,000 in danger of losing their schooling. More than 52,000 teachers have also left their posts, saddling the country's crumbling education system with an acute skills shortage. "Even those Syrian teachers who have ended up as refugees in other countries have faced obstacles which prevent them from working," the report said. Of Syrian children out of school, 53 percent live as refugees in Turkey, Lebanon, Jordan, Iraq and Egypt. The remaining 38 percent are in formal and 9 percent are in non-formal schools.

In the Gaza Strip, the U.N. said at least 281 schools had been damaged and eight of them were completely destroyed. "My children were injured in a school. They saw people injured with missing hands or legs, with wounded faces and eyes. They no longer see school as a safe place," the report quoted a Gazan woman. The Defense for Children International's (DCI) Palestinian office independently verified the deaths of 547 Palestinian children, 535 of them as a direct result of Israeli attacks. Nearly 68 percent of the children killed by Israeli forces were 12 years old or younger.

In Sudan, UNICEF said that high numbers of internally displaced families fleeing violence in Darfur and South Kordofan, more than 2.9 million people have been displaced and 1.2 million children under the age of five are acutely malnourished. The country has also taken in approximately 50,000 refugee children from South Sudan who fled the violence that has raged in their country for the past 20 month.

In Libya violence has left more than 434,000 people internally displaced and disrupted basic services including education. In Benghazi alone, 65 of 239 schools are still functioning, UNICEF said.

In Yemen, 2.9 million children are not going to school, many of whom were not in education even before the conflict escalated in March. More than 3,500 schools, about a quarter of the total, have been shut down and 600,000 children have not been able to take their exams.
Last Update: Sep 03, 2015 3:59 pm
RELATED TOPICS