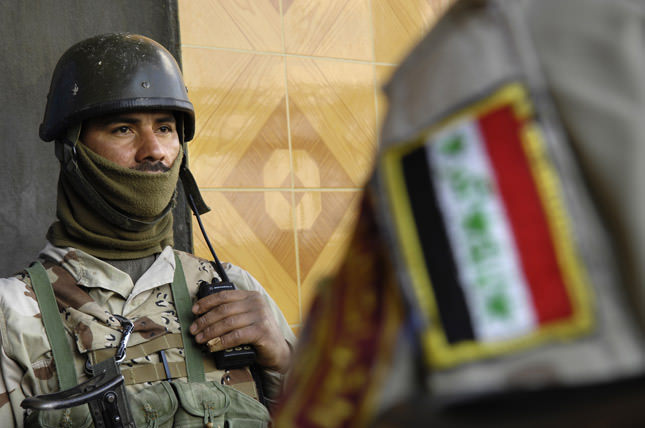 by Daily Sabah with Reuters Sep 04, 2015 12:00 am
Iraqi security forces raided the Baghdad headquarters of a powerful Iranian-backed Shi'ite militia overnight, security sources and officials said on Friday, following suspicions that Turkish hostages were being held in the area.

Gunmen in military uniform seized 18 Turkish workers on Wednesday from a sports stadium they were building in northeastern Baghdad, in what Ankara said appeared to have been a targeted kidnapping.

The militia, Kataib Hezbollah, did not immediately respond to requests for comment.

Baghdad has struggled to rein in Shi'ite armed groups, many of which fought the U.S. occupation and are now seen as a critical deterrent against the ISIS terrorist group which has vowed to march on the capital after seizing large swathes of the north and west last summer.

The city has also seen a proliferation in recent years of well-armed criminal gangs involved in contract killings, kidnappings and extortion.

Diplomats have said Turkey could suffer reprisals after abandoning months of reticence to launch air strikes against ISIS in neighboring Syria and open its bases to a U.S.-led coalition fighting the militants.

Turkish Foreign Ministry spokesman Tanju Bilgiç confirmed that 18 Turkish workers were kidnapped early Wednesday morning by individuals dressed in military uniforms. Bilgiç underlined that the workers, who were contracted by the Turkish Nurol Construction Company to build a sports complex in the eastern Baghdad district of Sadr City, are suspected to have been specifically targeted for being Turkish nationals.

Saad al-Hadithi, a spokesman for Iraqi Prime Minister Haider al-Abadi, said security forces had come under fire on Thursday night when they tried to raid a house on Palestine Street in the eastern district of Mohandessen. Intelligence had indicated the presence there of a member of the group involved in the Turks' abduction, he said.

Hadithi would not confirm or deny that the suspect had been apprehended, and would not comment on his possible affiliation with Kataib or any other group.

A spokesman for the Hashid Shaabi, a government body overseeing armed groups fighting ISIS including Kataib, denied the militia had any connection to the missing Turks.

Karim al-Nuri said "a routine search" had escalated into a quarrel that left one soldier dead and two militia members wounded.

"The friction started due to accusations that the Turkish workers were kidnapped by Kataib. Following the security forces' search, this allegation was proven wrong," Nuri said.

A security source said the army was searching the headquarters and surrounding buildings in the predominately Shi'ite neighborhood but had not yet found any trace of the Turkish hostages.

Baghdad operations command, which is responsible for security in the city, did not respond to requests for comment.